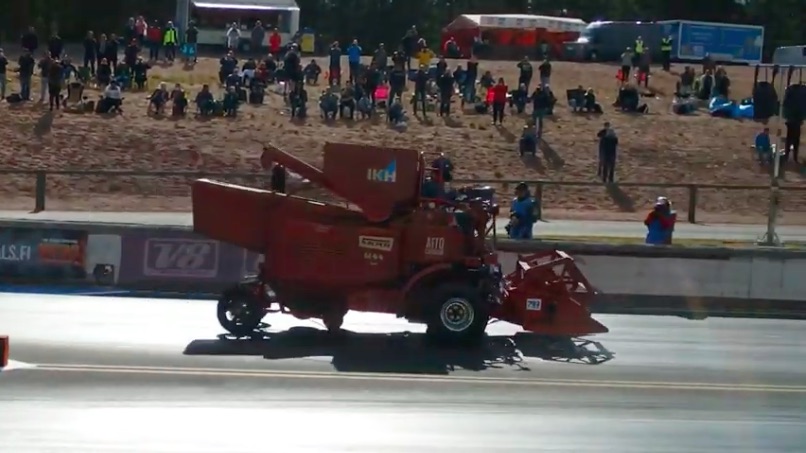 Just when you think you have see it all…literally. This video from Finland is stunning because it depicts a hot rod that is so weirdly awesome we do not have words for it. This 1967 model year combine has been repowered with a 500ci Cadillac V8 that employs two turbochargers to make boost.It has slicks in the front, it has front runners in the back and yes, it still has rear steering. The slicks in the front have to be bolted to a car style straight axle because if not, there’s no way someone could come up with a tractor gear set deep enough to get this thing over 80mph on the strip.

The video was made by someone’s camera it looks like so there are some details that we’re a little sketchy on, like the roll cage for instance. There seems to be some sort of driver protection happening but we’re not really, really sure on that.

Watching this thing transfer weight onto those tiny rear tires and try to jerk the driver out of the seat is amazing. The guy handles his business well and does not wreck the shit out of the combine which is what most people on planet Earth would have done. Instead he pedals it, straightens it out, and runs down the track in about the same time frame as a 1980s Camaro.

Press play below to see this 500ci Cadillac Combine get down the drag strip!

Droptop Dreaming: This 1961 Plymouth Fury Is The Sled You Never Saw Coming BangShift Question Of The Day: Do You Remember Your Very First Timeslip?

8 thoughts on “WTF Video: Watch This Vintage Combine Packing A 500ci Turbocharged Caddy Engine Run 15s at 80+ At The Digs”