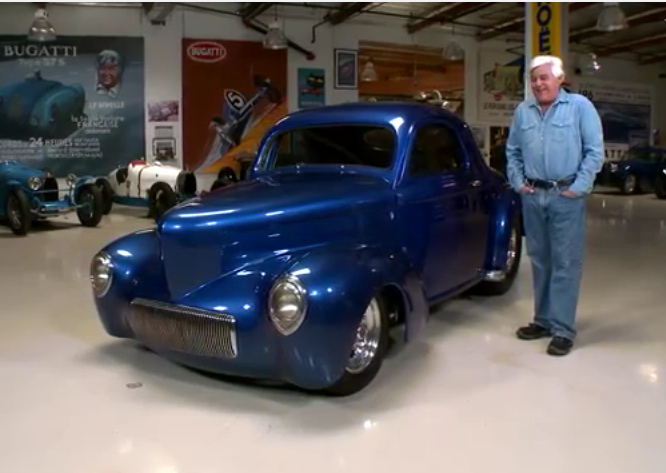 There’s something about a flat hooded, pro street Willys that will be cool until the end of time and maybe a couple hundred years after that. This particular car is even more interesting and not just because Jay Leno profiles it and drives it during this episode of Jay Leno’s Garage but because of the family history and the current owner of the machine.

If you are from California you may know this car already as it has always been in the Snyder family. Lynsi Snyder is the current keeper of this Willys, her dad Harry originally built the car and he raced it frequently out west. In fact, you can see the thing pulling the wheels off the ground in one of the historic clips they show of the car. What makes the Snyder family interesting? They are the founders and owners of In-N-Out Burger, the famed California based chain of burger joints that happen to produce the greatest food stuffs known to man. Lynsi is the president of the privately held company and she is a drag racer, competing in the top sportsman category through the NHRA division seven program. This is a pretty rare on-camera appearance for her as she keeps a reasonably low profile…you know, for a billionaire.

Anyway, Jay does his normal walk around inspection of the car and Lynsi provides a lot of the history and a lot of her personal automotive history and then the two hit the road in the snarling beast of a Willys. A couple of things tempered their fun, mainly some rain and then a flat tire. Through it all though, we learn that this car is special to Lynsi and that it was but one of the factors that propelled her into the sport of drag racing and into a lifelong love of cars. She mentions once or twice that she has a car collection and we can only imagine how freaking bad ass that is!

Lots of the idyllic visions east coasters have had and continue to have about California hot rodding center around the scenes of burner stands and cruises at places like In-N-Out. The company has never shied away from their love of hot rods and cars. They have sold hundreds of thousands (millions?) of t-shirts over the years with scenes like the ones we’re conjuring in our own heads right now. Also, their name appeared on professional drag cars frequently for years. Even now, the occasional multi-race deal will spring up for a funny car or dragster team running races west of the Mississippi. It is a cool thing and it is even cooler when you learn the roots of it all.

Oh, perhaps one of the other footnotes is that this is one of the few times that Leno will ever have someone on the show who has more money than he does!