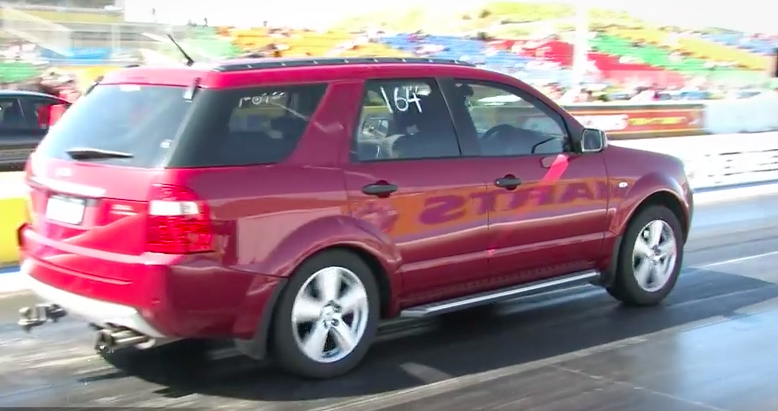 It was a recurring part of the conversation that Freiberger and I were having both during the live broadcast of Hot Rod Magazine Drag Week 2015 and in the car between tracks. The topic? Turbos. He infamously wrote several years ago that “turbos were for diesels” and while that was written before the advanced (and very available) EFI systems of today were on the market with all of their tuning nuances it was still kind of a cringe worthy statement. After all, while they had been on the fringes of hot rodding for a long time, turbochargers have been used throughout the world to spice up smaller engines into acting like larger ones. Enter this Ford Territory wagon/SUV thing from Australia.

This car has all the styling of a loaf of bread and we’re sure it is a preferred model by moms across the country because it has storage space, room for the kids, and all the amenities you’d expect of a vehicle in this class. It came from the factory with a “Barra” inline six cylinder engine. We have showed you all kinds of ways that people in Australia hot rod those things but turbochargers are certainly the way to get the most out of the tried and true inliner.

This thing weighs two and a half tons, make 654hp, uses all wheel drive and in this video you will see it crank out runs as quick as 11.12/127! The best part? It has been driven some 80,000 miles in this modified form and it still loves getting the pedal mashed to the floor. The engine has a forged bottom end, a stock cylinder head, and a set of cams out of a Falcon FG which provide better profiles than would have been seen in the weak ass Territory cams. They run a Borg Warner S300 turbo and it force feeds the engine at 24psi of pressure. The whole thing is awesome and it shows the power potential that turbos can bring.

Listen, even David admitted that the “turbos are for diesels” thing is one he’d love to get back! This car sure proves that.

PRESS PLAY BELOW TO SEE THIS TANK OF A WAGON FLY –

Morning Symphony: Get An Earful Of The 1959 Chevrolet Biscayne "Duntov" Patrol Car! Take A Look At A Burnout Contest From The UAE - Hey, Australians: We Found Hoons Crazier Than You!