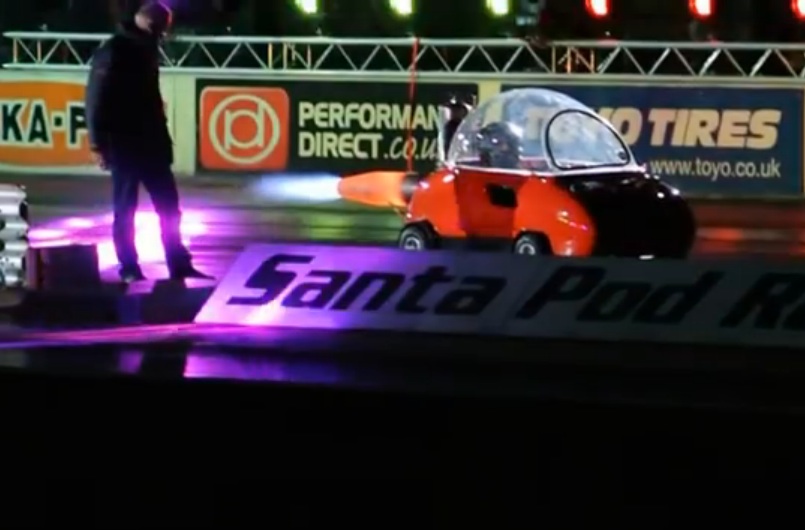 The Peel Trident is a weird little microcar that was produced in England decades ago. They have appeared in television shows, movies, and every now and again, one will appear at a car show just to keep things interesting. Stock, they have a horsepower rating in the single digits, can go about 30 miles per hour, and due to the curved plexiglass top, the driver will cook and roast in roughly 14 minutes when driving in direct sunlight. In other words, it was basically put on this Earth to be used as a jet car. Thankfully, a guy in England decided to do just that and he attached a jet engine to the back of the Peel and in this video you will see it make an agonizingly slow run down the course. We’re not going to give you the numbers here, but you can watch the video below and see it all happen.

The Peel looks pretty hilarious heading down the track with fire shooting out of its backside and all kinds of screaming noise from the Jet. It looks like it is rolling on go kart wheels and all for maximum control and aero advantage by lowering the ride height to like 3 inches to like 2 inches. We bet he picked up a couple of mph due to his hard work in that department. Hey, we’re having fun with this guy but we admire the fact that he built this car and is actually racing. it.

Man In Australia Arrested For Driving Wingless Plane To Bar - This Could Be Our Favorite News Story Ever Craigslist Find: A Prerunner Ford F150 That May Satisfy Your Trophy Truck Itch