When Two Camaros Get Together At The Top End Of The Drag Strip, Nothing Good Can Come Of It 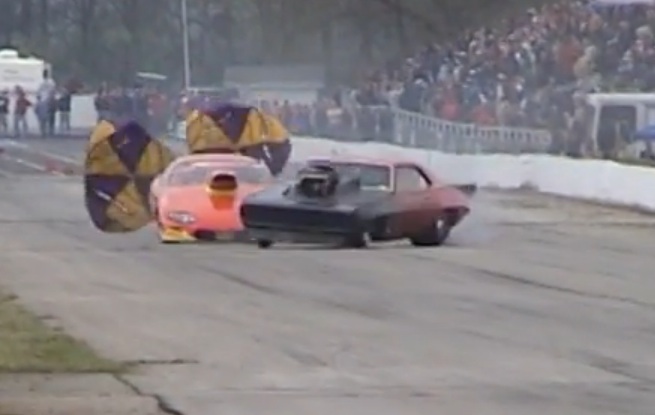 Urban Hillbilly Action Videos recently pulled this piece of wreckage video out of their vault and it is (as usual!) pretty wild stuff. This video was shot at Huntsville Dragway in 2006 and it features racers Steve Kirk and Tony Johnson. Tony is in the blown car that becomes an unguided missile and Kirk is in the fourth generation Camaro that he drove to wide spread fame in its heyday. They are running hard against each other on the eighth mile at Huntsville, which was at one time a place akin to the fictional terror dome from Mad Max when it came to Outlaw 10.5 action.

Kirk was one of the guys who really kicked the scene ahead and just on appearances alone you can get the idea of how he approached the racing as opposed to the majority of the guys during this era. We’re not taking a swipe at Tony Johnson because his blown Camaro was freaking awesome but Kirk really had a stout program back then. On this run however, Johnson was the quicker car going 4.49 to Kirk’s 4.50…and then the dookie hits the fan.

Johnson’s car comes across the track and gets into Kirk who is amazingly able to keep the car centered and straight as Johnson bounced off him and continued across the track. Everyone comes out of this OK but Johnson’s Camaro got it pretty bad when it got into the wall and spun. In typical Urban Hillbilly fashion, the wayward Camaro ends up sliding to a stop directly in front of their camera. Shooter Greg Fergus abandons his post and runs down to cut the power and aid Johnson.

Racing And Action Footage From The Race 4 Real At Sydney Dragway - Something For Everybody! Caption This: Is This Rusty 'Cuda The Next Drag Week Ride For Buck McCoy?

One thought on “When Two Camaros Get Together At The Top End Of The Drag Strip, Nothing Good Can Come Of It”