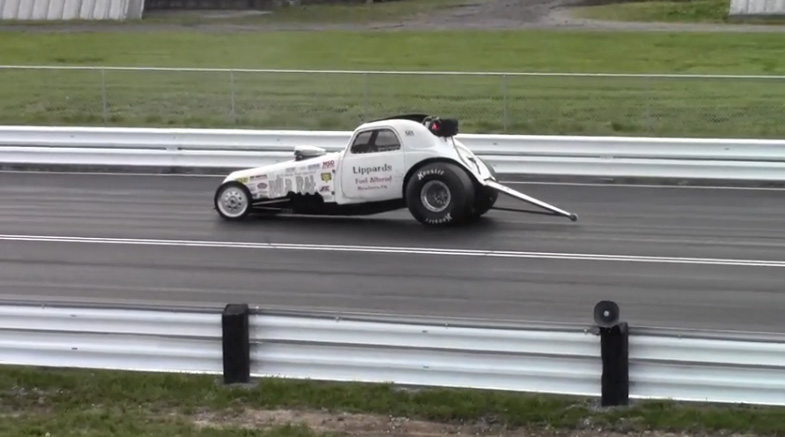 We have had a lot of cool stuff on the site so far this week but this is the coolest video(s) by a mile. Bret Kepner alerted us to the existence of this car yesterday and from the stories he was telling us, it sounded like the guy had spent a little too much time in the mid-day sun. “Yeah, there’s this injected fuel altered that races by me and the guys run a big block Chevy, virtually 100% nitro, and they don’t do burnouts, but the car really flies!” Hey, the guy can be a joker sometimes so when he sensed our disbelief he said, “I’m going to send you some videos..” which he did and they are spectacular evidence of the bad-assery this car asserts on strips in the middle section of the country.

We don’t think we’re being insulting when we say that this car is low buck to the core. The car is set up to run the eighth mile with a steep 4.30 gear in it and as you’ll see the paint job is basic and fulfills the basic requirements of a paint job but won’t be garnering any “best appearing” awards any time soon. The engine is a big block Chevrolet and we’re not sure what the final displacement is or what type of block it is based off of. Could it possibly be iron? Probably not but there’s always a chance. The car is injected and not blown and if we had to take a shot at why it would default back to the fact that the blower adds a big expense and complication to the works and when you just run 100% nitro anyway, the liquid supercharger takes the place of the mechanical one. Yes, we just said that the team runs the straight can. Wait until you hear this car, if you love stuff that burns nitro, this one will make your pants tighten up. The transmission is a three speed Lenco unit shifter with buttons on the steering wheel, the car is self starting, and when you see the driver’s area you’ll geek at the knobs, switches, and controls the driver futz’s with before heading down the track. How fast is it? How about low fours in the eighth? You’ll see runs in the 4.30s here and speeds over 160-mph. One thing you won’t see? Burnouts, because the team typically does not do them.

That sounds like the craziest thing of all, right? How can you just roll up there on cold tires and expect to go anywhere? The fact is, we’ve seen many occasions where one racer or another is not allowed to make a burnout due to a late start up or some other condition and the car has stuck and headed down the track. These guys save themselves money and they also save a lot of wear and tear on the car by skipping the burnout. When you see the videos below you’ll understand that it isn’t hurting them at all.

This car pretty much embodies everything we love about drag racing. It is powered by a virtually straight nitro, it is run by a family, it is campaigned at eighth mile tracks that aren’t exactly world renown, it lacks every frill you could possibly imagine, and it runs like a scalded cat. The Wild Rat is nitro heroism at its finest level. We’re going to show you some in car and out of car videos below. We KNOW you’ll dig ’em!

Thanks to Kepner for the tip off on the car and the video links!

HERE’S THE BEST SOUND OF THE CAR YOU’LL HEAR…INSANE CACKLE AND HE ACTUALLY SCRUBS THE TIRES HERE!

2015 Buffalo Motorama: Photos From The Floor And The Rafters! Unique Muscle, Trucks, And Hot Rods! Pro Street Hemi Hammer - This Demon Has 535ci Of Stage V Headed Hemi Under The Orange Hood!