The 2014 Great Race Road Trip Adventure Part 2: Fun Times And Late Nights On And Off The Course 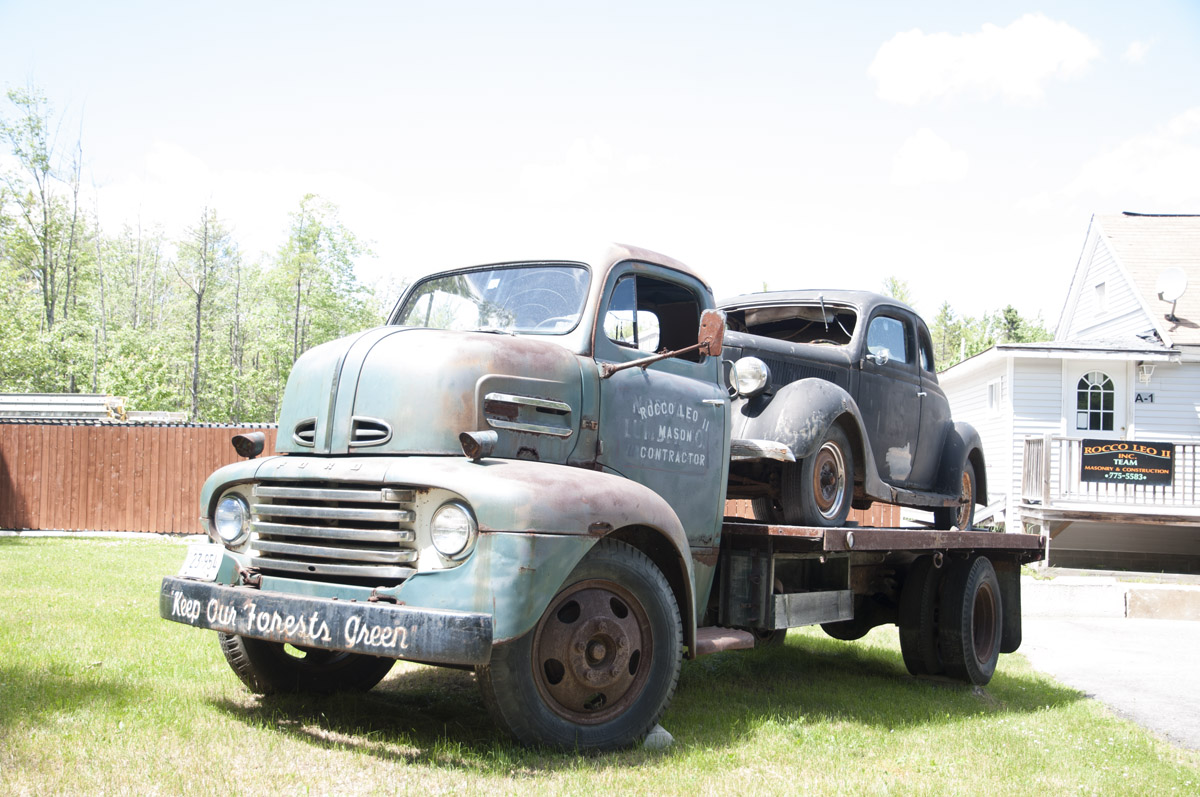 (Words and Photos by Tommy Lee Byrd) – Yesterday, you may have learned about the intricacies of the Great Race, but today, you’re going to learn what goes on when a couple of guys are tasked with covering the event. My personal task on the Great Race is to photograph the event from start to finish, and handle the majority of social media updates via Instagram, Facebook, etc. so my plate is pretty full for a couple weeks. My traveling partner is a good friend and coworker Jason White, who handles video production. He (along with another video dude) shoots the event for TV production, but also spends a great deal of time compiling all of the footage into a very cool highlight reel, which is played at the awards banquet. In previous years, we had a driver, which allowed us to get car-to-car footage. This year was a bit different, as the media team scaled back, leaving the two of us to drive the route on our own.
Our Great Race adventure started on Wednesday, June 18 with a flight from Chattanooga, Tennessee to Boston, Massachusetts. As we hopped off the plane in Boston, we hightailed it to the car rental area, and claimed our reserved production vehicle. We requested a Chevy Tahoe, since they have plenty of room and they’re awesome. When we handed our paperwork to the attendant, we passed by a row of brand-spanking-new Suburbans and joked to the attendant that one of these Suburbans would be great for our trip. As it turns out, the keys in his hand belonged to a black 2015 Chevrolet 4wd Suburban. Quietly rejoicing, Jason and I loaded our gear into the truck and blazed out of the parking garage before the rental agency changed its mind. This thing had six miles on it, and it is leaps and bounds above our typical rental car equipment, which is generally a Chrysler mini van. We had just won the rental car lottery.
We drove from the Boston airport to Ogunquit, Maine, where the Great Race would begin. The race is nine days in length, but we arrive a few days ahead of time to help with setup and cover an event called the Hagerty Trophy Run, which is essentially a warm-up rally. One of the best memories from the 2014 pre-race activities was a 1936 Ford transmission swap, which took place in a random shop in York, Maine. You could tell this was the car guy hang-out place, because lots of folks came and went throughout the day. Us Southern boys found out that Northeasterners have a very colorful vocabulary—the F-bomb count in that shop was in world record territory.
Anyway, the shop had a lift, plenty of tools and a mini-fridge with about 36 beers crammed in it. When the car was back on its wheels, one of the shop guys had to move his truck, so we might have talked him into doing a burnout—it didn’t take much negotiation though. Good burnout my friend.
Once the race actually got started on Saturday morning, we would eventually visit a total of 19 cities along the 2,100-mile rally route. Without question, this event is an outstanding testament to the cars and teams associated in the race. As the media crew, our days typically started at 7am, and lasted until well after midnight, with the two of us hammering out work after the day’s festivities. Website updates, photo resizing, social media updates, video editing, media uploading, media back-up, and lugging a thousand pounds of gear in and out of each hotel room happened between the hours of 9pm and 7am, with a little bit of sleep thrown in the mix.
Each day, we followed the precise route, by using the racer’s instructions, which are highly complicated. A paper booklet with about 40 pages of distinct instructions described each day’s route, with a variety of speed changes and tricky turns that keep the drivers and navigators on their toes. So, we generally disregard the speed changes and just follow the course until we find a cool spot to shoot. Generally, we try to find four cool, scenic spots a day, while also stopping to cover the lunch stop and dinner stop, and grabbing car-to-car shots in between. I take about 600 photos per day, and my videoshooting cohort gets a zillion video clips, including GoPro video and time-lapse footage.
We passed through lots of different terrain, including mountains, farm land, covered bridges, regular bridges, draw bridges, small towns, big towns, swamp land, and much more on our trip down the East Coast. We even passed over the Chesapeake Bay BridgeTunnel, which was pretty crazy. The terrain changed with each day of rallying, and so did the climate. By the time we entered North Carolina, it was officially hot and humid, and it never eased up from there on down to Florida.
The race ended in The Villages, Florida, which is an upscale city that is geared toward retired folks. Yes, that sounds like a weird place to finish the race, but we quickly realized that it was a good move, as the folks in The Villages were very passionate about the race when we rolled into town. By the way, The Villages has an extremely high population of golf carts—in fact, there is a separate highway for golf carts that goes all throughout the town.
Another huge highlight was story time with Humpy Wheeler—man, that guy has some good ones, and we hung onto every word as he talked about the NASCAR glory days. 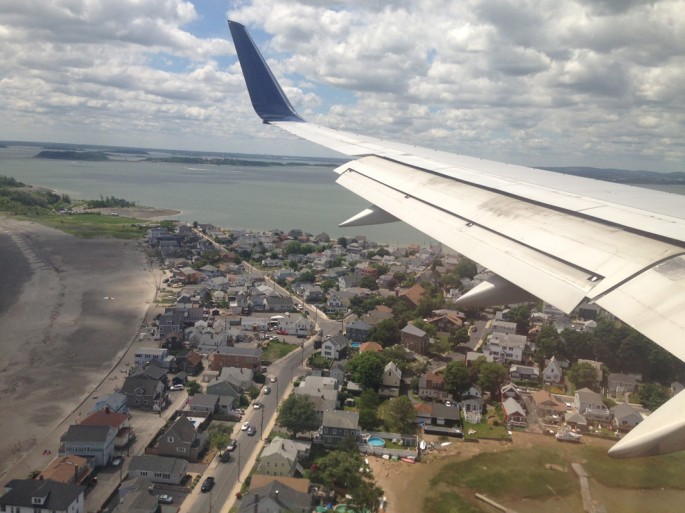 We usually drive to the starting point of the race, but this year, we flew from Chattanooga, Tennessee to Boston, Massachusetts to shave some time off our travels. 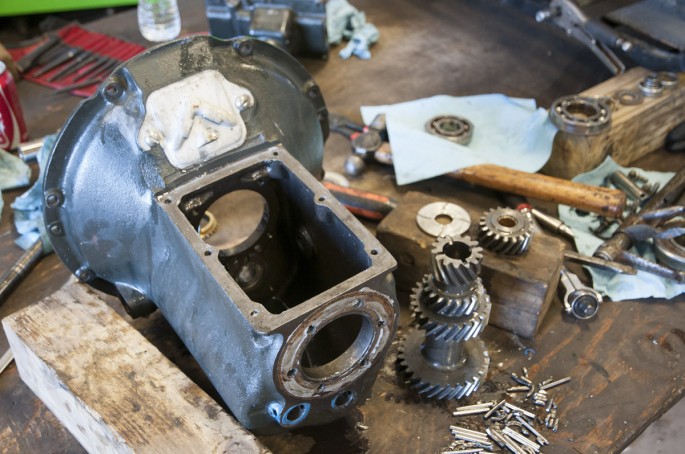 Before the race even started, a ’36 Ford tore the guts out of its three-speed transmission, and we borrowed a dude’s shop in York, Maine to get it fixed. 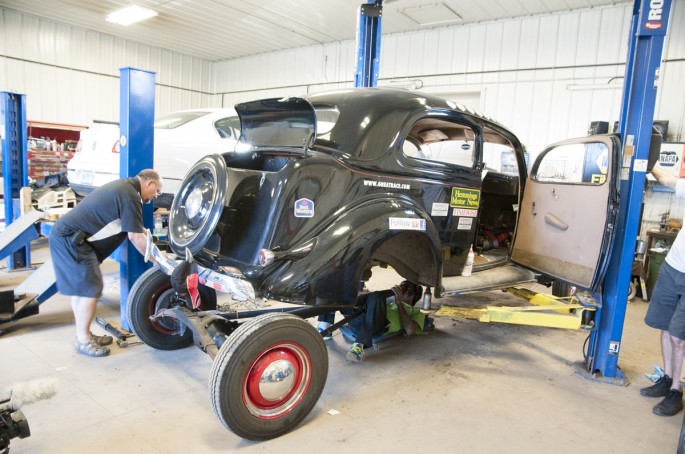 It only took a few bolts to remove the entire rear end and wishbone assembly, so that was the easiest way to get quick access to the transmission. This would’ve been much
more difficult without a lift. 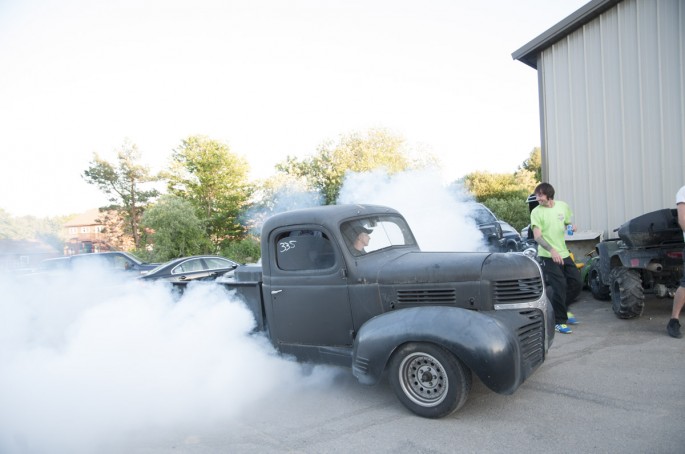 One of the dudes at Everett’s Auto Repair did a killer burnout for us after a long evening of working on the ’36 Ford. 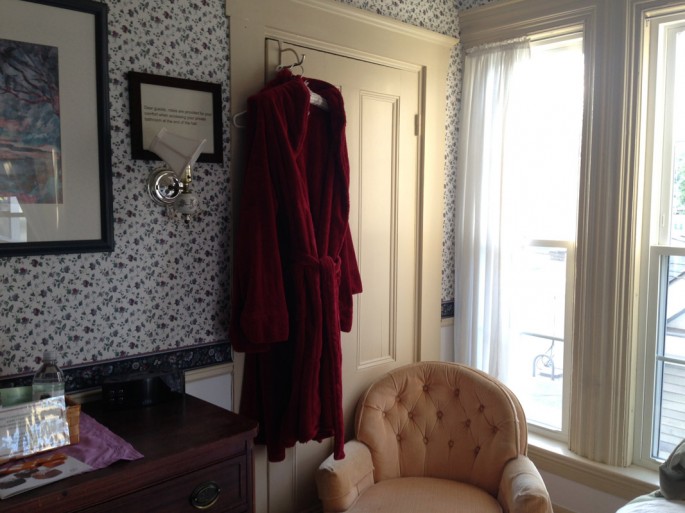 The media team stayed in a different hotel than the rest of the Great Race staff. It was a super old place with a total of seven rooms in the whole place. My room even had a complimentary robe, which was there because it had a detached bathroom. Weird. 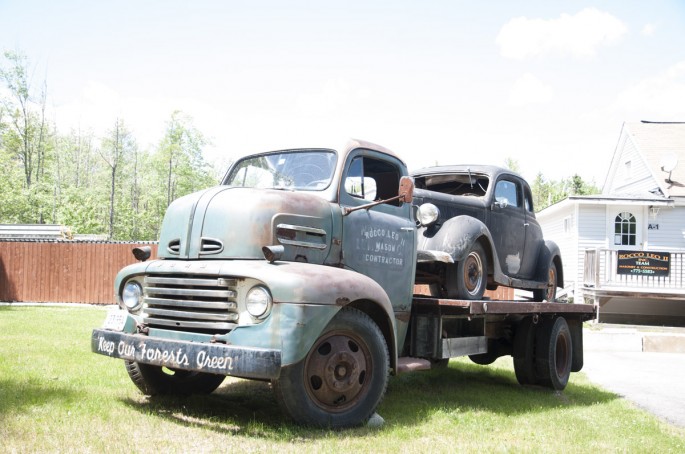 I take pictures of all the cool stuff we see on the road. If we had more time, I’d end up with a thousand pictures of cool roadside cars and other interesting things. This old
flatbed truck and Ford coupe are so awesome. Bob Varsha was the Grand Marshall of the 2014 Great Race, and that’s my traveling partner, Jason beside him during our opening reception. 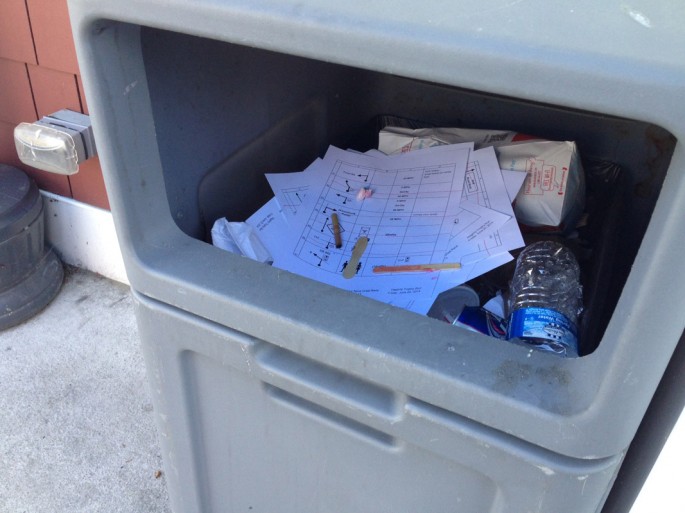 At one of the fuel stops about half-way through the first day of competition, I spotted someone’s rally instructions in the trash. Must’ve been a tough day… Humpy Wheeler is a legend in the NASCAR world, and he entered the Great Race in a very cool Hudson Hornet. Jason and I heard some of the greatest stories of all time from
this guy. I’m not sure where we were when I spotted this crazy military truck, but it was cool enough to take a picture before we pulled away. 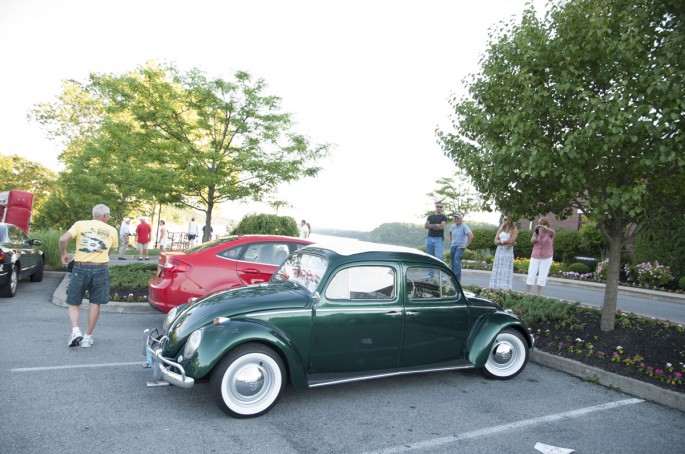 At our Poughkeepsie, New York stop, this Volkswagen Beetle showed up and had us scratching our heads. 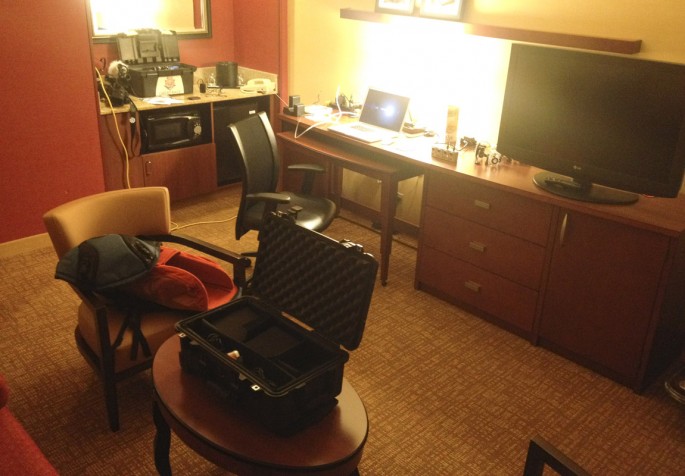 The Great Race is a logistical nightmare for the staff, and Jason and I reaped the benefits of a hotel booking mistake in Poughkeepsie. We were awarded a suite for the troubles, and it was great, compared to our normal workstations My job every night was to dump all of my photos to the laptop and resize the select shots. Then, I would post daily highlights on the Great Race website. Jason’s job involved dumping many gigs worth of video to the laptop and then editing clips for the banquet video The Fox at East Stroudsburg University stole my Great Race hat and put it on his ear, so I took his or her picture. 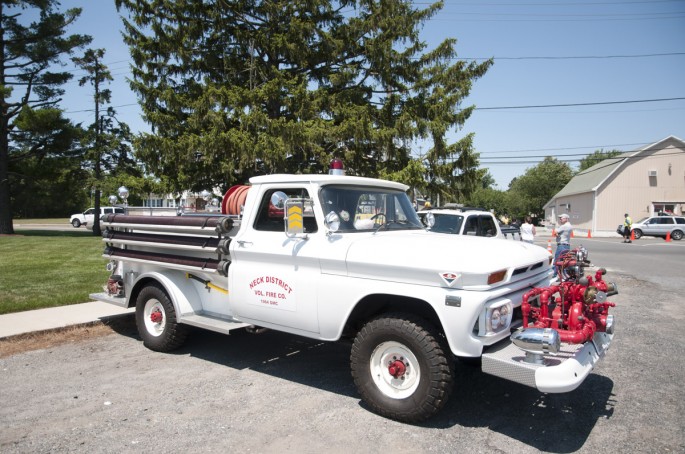 This ‘60s GMC four-wheel drive fire truck is just plain cool. We spotted it at the Millsboro, Delaware lunch stop. Also at the Millsboro, Delaware stop was this incredibly cool ’57 Corvette survivor. The Chesapeake Bay Bridge-Tunnel is downright freaky. It’s a super long bridge that narrows down to two lanes and then goes WAY under water. It was a $13 toll to cross the
bridge tunnel. 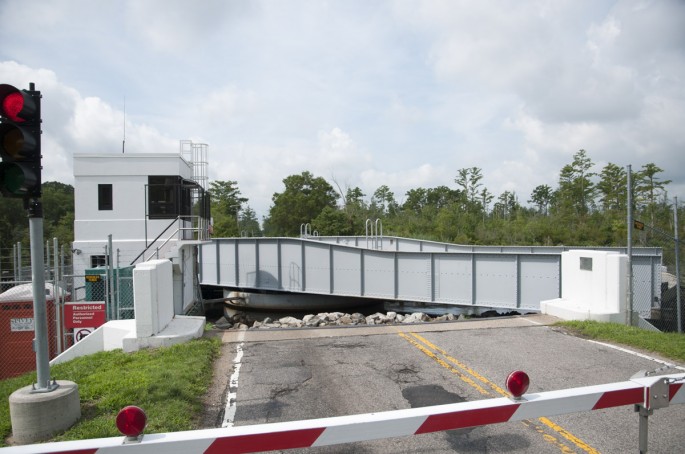 And then there were lots of other bridges like this swivel bridge, which held up quite a few racers. Oh wait, another bridge. This one felt a bit sketchy because it was sort of narrow and very bumpy. Oversized shopping carts powered by big block Chevys are mandatory photo material. This one sat at our lunch stop in Clinton, North Carolina. Other notable vehicles at this
stop were a Plymouth Superbird, a Mustang Boss 429 and a couple of Pro Mod drag cars. 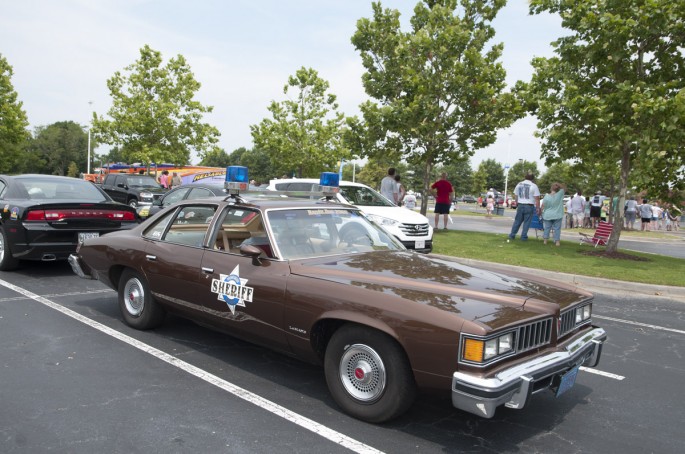 Buford T. Justice is a memorable character from Smokey and the Bandit, and a recreation of his patrol car was on display at our Myrtle Beach lunch stop. Also at the Myrtle Beach lunch stop was a cool collection of vintage stock cars. Fat tires on all four corners, hacked up bodies and rowdy engines make these cars way cool
in our book. We made a pit stop at a little country store near a creek, so after a bathroom break, we walked over to the creek to check things out. We noticed a turtle struggling to get away
from the bank, and noticed it was tangled up in fishing line. Jason saved the day and released the turtle back into the wild. Some of our shoot locations offer great scenic views, while others are chosen because of high speed turns. And then sometimes, a dude is mowing his yard and spraying grass
(and probably rocks) onto high dollar cars. It was worth stopping for a picture. Sometimes, a dozen hot Krispy Kreme donuts are the best therapy for a long road trip. Wash ‘em down with an ice cold Coke, and you have just enough energy to get through
the night, and wake up the next morning with diabetes. During our overnight stop in Mount Pleasant, South Carolina, we got to eat dinner on the USS Yorktown aircraft carrier, and then take a tour of the place. It was way cool. We’ll finish off this piece with the baddest mud truck that I’ve ever seen. I had the hammer down somewhere near Savannah, Georgia when we came upon this rig. They
were undoubtedly headed somewhere to have some fun.

Thornhill Dragway Park: Action Photos From This Historic Strip That NEEDS YOUR HELP! Professional-Level Sleeper: Alfa Romeo 164 ProCar V10-All The Fun Of An F1 Engine In A Sedan!

One thought on “The 2014 Great Race Road Trip Adventure Part 2: Fun Times And Late Nights On And Off The Course”