Are They Ruining It? The Motion Raceworks Bubba Nova Gets Engine Swapped 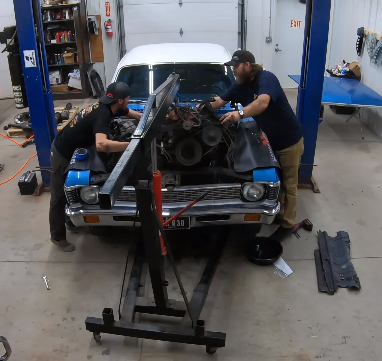 This 1972 Nova is the first street car project to come out of the Motion Raceworks shop, and it is a pretty special one. Yes, they have built several cars that they drive on race events like Rocky Mountain Race Week, that are street legal and very capable, but those are all caged cars and not as convenient to drive daily. Hence Bubba’s Nova. When Doug Cook bought this thing it was already grandma perfect. I mean perfect. Like a time capsule that you just can’t help but fall in love with. That’s because it is all original, had less than 35,000 miles on it, and had been taken care of. But why is it called Bubba’s Nova? Well that is because Doug’s grumpy old boxer named Bubba fell in love with the bench seats in this car and so it is his.

But back to the engine swap. In stock form this thing is equipped with a 2-barrel carbureted 350 cu in small block backed by a TH350 transmission, and a 10-bolt rear end. In an effort to get more power and better mileage for this daily driver, Doug swapped the intake and carburetor over to a 4 barrel intake and Holley Sniper EFI. Unfortunately this completely stock engine really didn’t like it much. Sure it starts right up and idles like a champ, and part throttle transitions are better, but overall it didn’t get better mileage and it just didn’t make the performance jump Doug was hoping for. With that said, I’m sure we could do a few more upgrades to this engine to make it make more power, get better mileage, and be a fun muscle car cruiser engine. But that isn’t what Motion Raceworks does. They LS and LT swap the world, so that is what is going to happen.

I’ll be honest, even though I know this car will be light years ahead in power and mileage and all those things, because the LS engine platform is significantly better than the traditional small block that came in this Nova, I was not one of the folks who supported this swap. I told them to make the small block good, or put a big block in it, just to keep that factory vibe. But, I know this is the smart swap for them and so I’ll be supportive and stop pouting about it. This is the first video in the series, so watch and enjoy because Bubba’s Nova is going to be an awesome driver when it is all done.

Alex, Debbie, And Dennis Taylor Build Their Own Fiberglass Body Parts For Alex Taylor's New 6-second '55 Chevy Build Here's A Simple, Organized, And Convenient Way To Store Your Clamps In The Shop