BOOM Video! Watch This AMC Javelin In The Netherlands Explode Like It Is Packed Full Of TNT 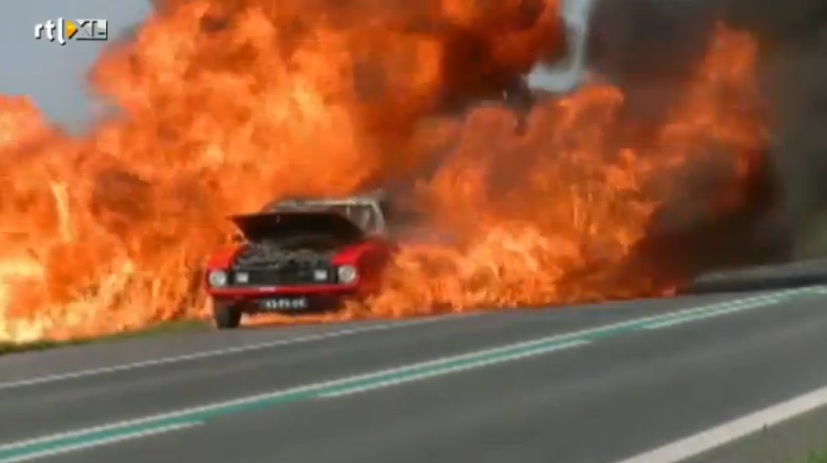 So here’s a public service announcement to anyone who happens to find themselves in a mid 1970s AMC Javeling after it has caught on fire. RUN. Run like you are in a Jerry Bruckheimer movie because at some point you will be living in a Jerry Bruckheimer movie, especially if the Javelin you are in explodes like the one in the video below. We have showed hundreds of car fire videos over the years here at BangShift but this one takes the cake for a street car popping like a bomb. Normally there are some small fizzes and pops when a car burns but rarely do they ever ‘splode like this one. Did this guy have a shipment of TNT in the trunk? Some really good moonshine? Just the gas tank erupting all at once? What we do know is that the sad remains of the car are shown after the firemen are able to extinguish the thing and to say that there’s not much left would be the understatement of 2014. This thing is a Kenosha built charcoal briquette.

Our friend Arild from Norway sent us this video and as best we know it has not see the light of day over here in the USA as of yet. As much as we’re being smart asses about this stuff, everyone needs to keep a fire extinguisher in their car to try and stop small fires from becoming this. We don’t know how it started but as you can imagine electrical issues are the biggest cause for small fires to start and things escalate really quick as cars are largely constructed of stuff that loves to burn. We have never been forced to sit and watch as our pride and joy burned to the ground but we know guys that have been through that and it still chokes some of them up. Thankfully no one was hurt in the fire of the ensuing blast. This is a BIG one.

Actual NASCAR Dodge Charger Daytona For Sale On Ebay: One Of Less Than 10 Known To Exist, Raced By James Hylton, Only One To Suffer Fatal Wreck Roadside Find: This Big Ass Truck Looks Like One That The Guys At Big Ass Trux Would Build!

4 thoughts on “BOOM Video! Watch This AMC Javelin In The Netherlands Explode Like It Is Packed Full Of TNT”