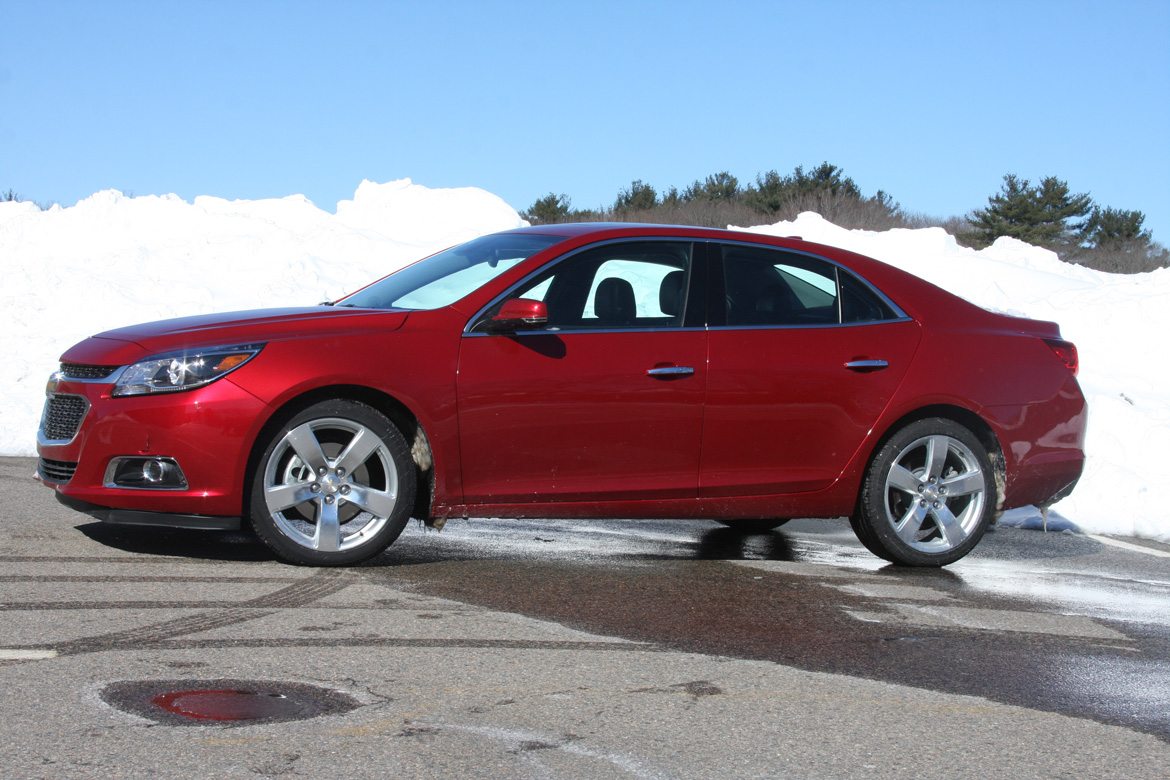 When Chevy threw the keys to a 2014 Malibu at us, we were interested in spending a week with the car to see if it really was the snappy upscale sedan that GM’s advertising purports it to be. With a 2.0L turbocharged four cylinder engine making 260hp and 260 lb/ft of torque on a very flat curve, we had some expectations for this car to be a fun and zippy car to tool around town with. For years the Malibu has been a bland faceless sedan that people looking for an appliance to drive around in bought. If it is even possible to consider, the Chevy Malibu was more bland than a Toyota Camry. This newly restyled sedan with the updated powertrain and interior is aiming to break out of that mold. Our tester was slathered in the optional Crystal Red Tintcoat paint ($395), wore the optional 19″ wheels (as part of the $1,000) LTZ package, and with the optional HID headlights as part of the advanced safety option package ($890) we thought it looked pretty cool for a family mover four door. The lines of the car are compelling and the back of the car has a little Camaro-ish situation. All of this stuff is nice, but how was the car? Read on and we’ll tell you through photos and captions below. 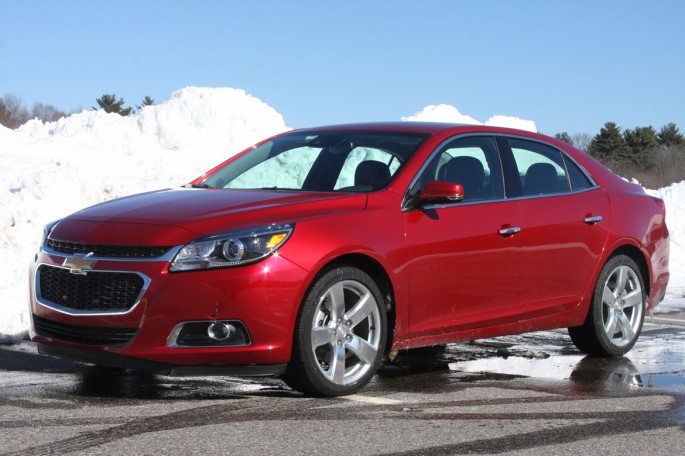 The positives on the 2014 Malibu are the engine, which is torquey and great along with the suspension which was complimented by the 19″ wheels and tires. 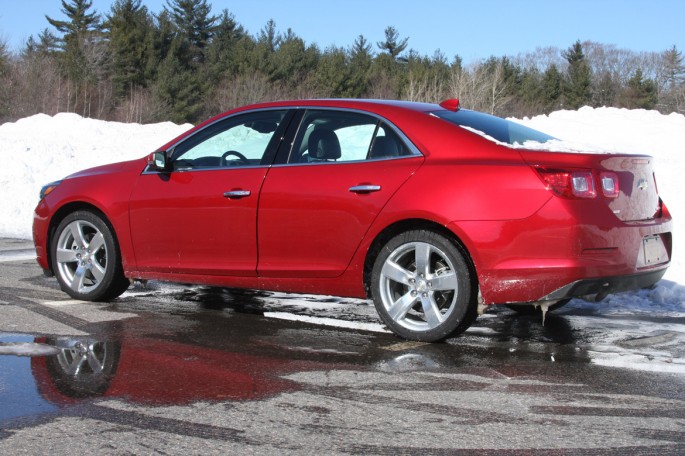 Unlike previous generations of the “modern” Malibu, this car actually makes you want to look at it and doesn’t disappear in a crowd. Yes, the great red hue helped, but the lines on the car get attention. The larger wheels certainly do a nice job filling up the wheel wells but we did catch ourselves looking the car over more than we thought we would. 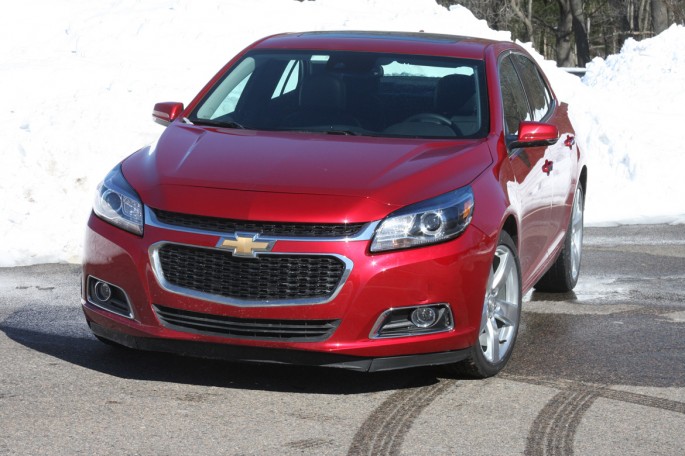 We had the car during a week of varied weather conditions. In the snow and wet the car was capable and surefooted. We’d have no trouble recommending the Malibu to anyone living in a snowy climate. On dry pavement, the car doesn’t feel like a sports car but it isn’t sloppy either. Powering our of a corner with the turbo engine will result in some understeer as it is a front wheel driver, but body roll was at a miniumum and the short sidewall tires provided good grip on cold pavement. 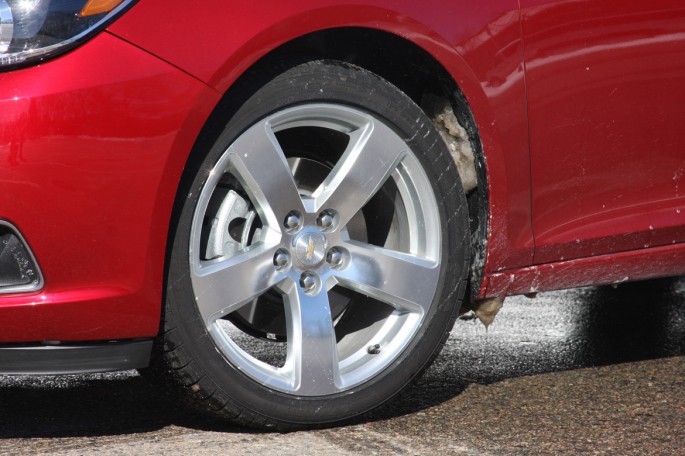 We really liked the optional 19″ wheels. These hoops give the car a much more athletic appearance over the stock steel wheels and hub caps. While the suspension was not specifically changed or tuned for this package, the car was fun to drive and definitely “European” feeling. We say that after getting out of a European car the week before we had this and the steering feel, suspension stiffness, and overall dynamics of the car were virtually the same. 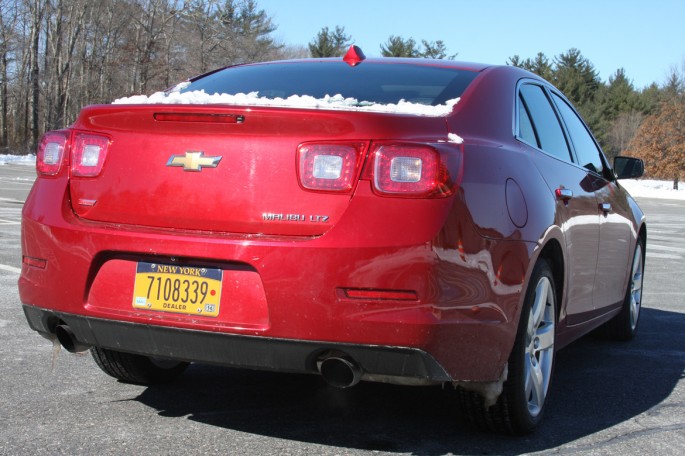 The back of the car shows some of the GM “design language” in the tail light shapes and small spoiler on the trunk lid. Both of those things evoke a little bit of Camaro to us. The dual stainless exhaust out the back looks nice and has a sweet sound when you have your foot buried into the carpet. 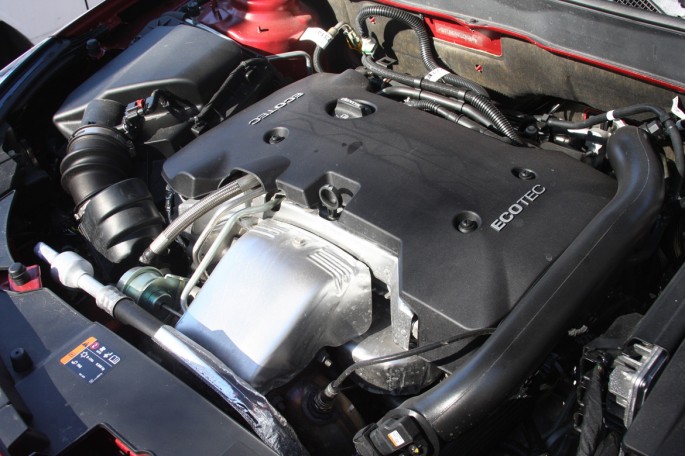 This is the best part of the car, by a bunch. This 2.0L EcoTec engine has a very flat torque curve and it is immediately apparent while driving as the car will race to the highest gear possible (for fuel economy) and it can hold those tall gears and rely on the torque that the little engine produces to pull it along. In a “performance” driving environment, the car had enough guts to surprise even us. We’re not saying that the Malibu is very fast but it will run to 60 in under six seconds and there’s enough zip to make passengers giggle (especially if they are 5 and 7 years old). This engine delivered fine fuel economy of well over 20mph in mixed and sometimes agressive driving. 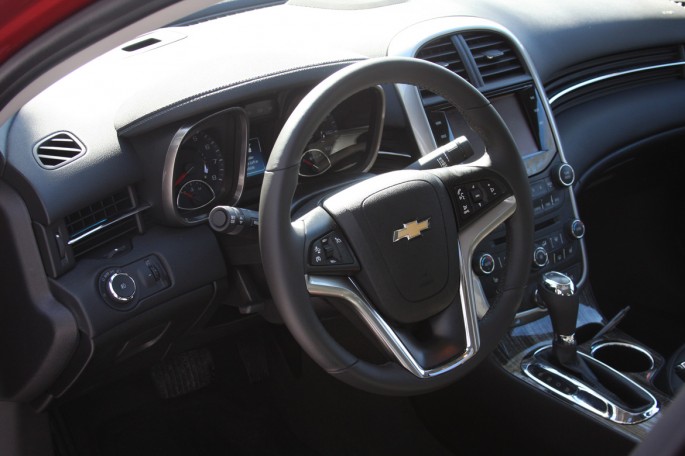 Interior layout and quality is certainly good and GM is ever improving in this area. A look at previous generation Malibu models certainly would not have you peering into a sports oriented cockpit like this. The gauge cluster again has some shades of Camaro in it, the thick wheel was comfy on long drives, and the center stack with the LCD screen was easy to use. It was nice and well equipped but was a black hole of plastic. We’re not blaming GM as the current trend is to have this “color” dominate but it stinks to keep clean and is very bland to look at. 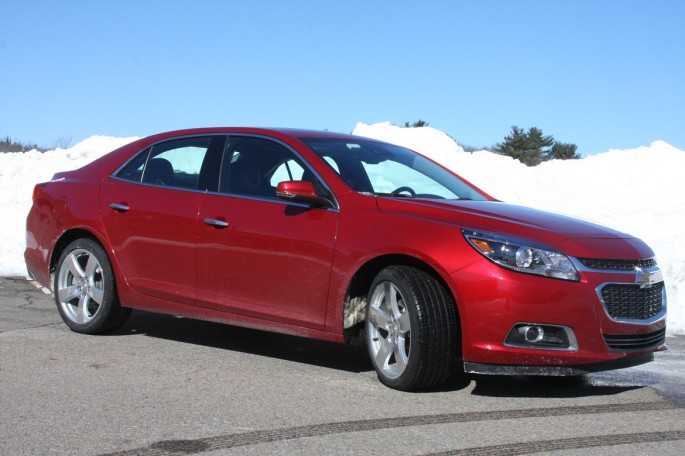 If there is one area that let us down with the 2014 Malibu (as equipped here) it was the price. The MSRP on this car is $35,105 and that is a lot of money for what this car is. We were actually blown away when we saw that price on the window sticker supplied with the car because we had it in our mind that this was a high 20k or bottom 30k ride all day long. Optional equipment on this car was $4,430, so there is certainly room to move downward on price but even then you are looking at a relatively stripped model in the high 20s. We enjoyed the car, but we’d enjoy spending that type of money on a gently used sport sedan with more power, more room, and potentially better handling before we threw it at a 2014 Malibu. 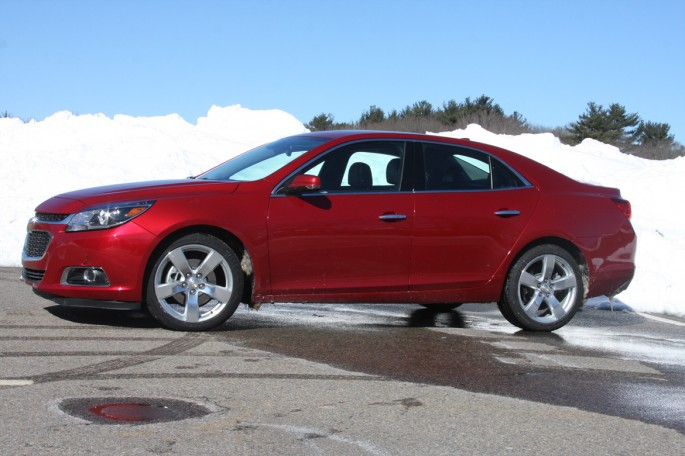 Overall verdict on the 2014 Malibu? We love the engine and transmission combo, we liked the handling and driving dynamics of the car, were satisfied with the looks and styling changes but just can’t swallow the price. Keep the content and knock several thousand bucks off the top and GM would really have something here. As it stands we believe the car is just too rich of the typical buyer’s blood.

Wait until you get a look at this 1954 Pontiac "Tribute" Car. Awesome? YES! Action Gallery: The Tennessee Take Over At I-40 Dragway - Southern Grudge Race Madness (Video, too!)

7 thoughts on “BS Roadtest: The 2014 Chevy Malibu – Good Looks and Good Power Come At A Price”