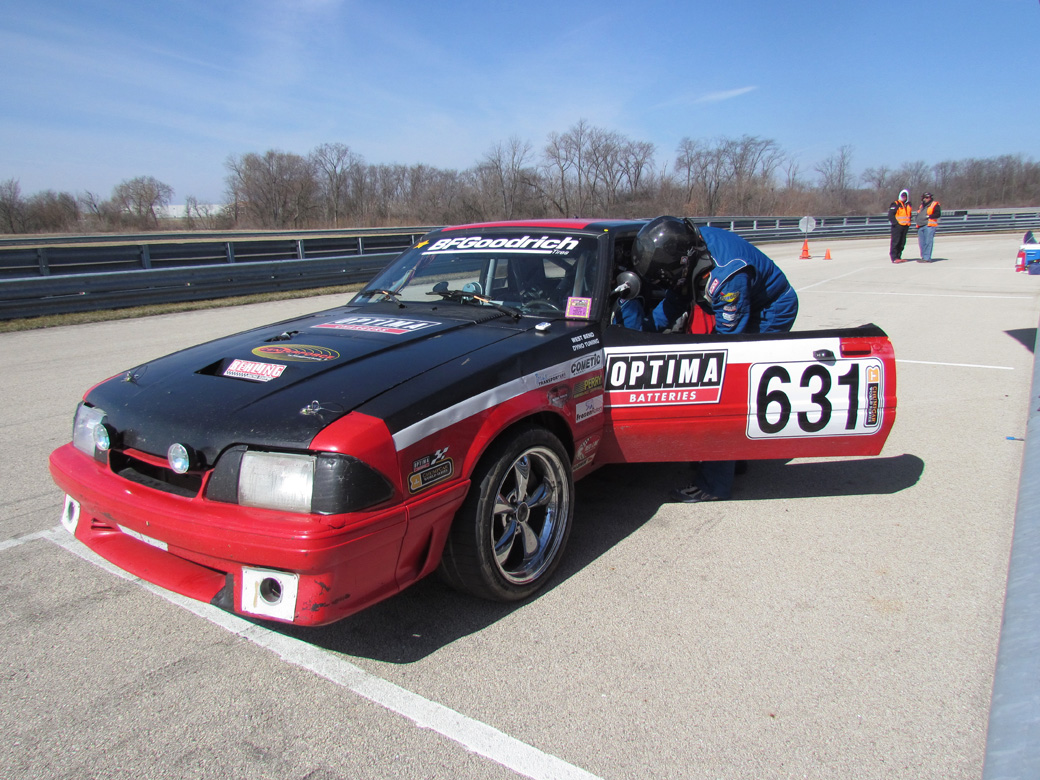 The Optima Batteries ChumpCar World Series (www.chumpcar.com), blew their way into Joliet, IL, to make their debut at one of the most unique country clubs in the US….Autobahn County Club located just forty minutes west of Chicago.

This little sleepy town of Joliet, IL known for it’s industrial plants and quarries, hosts not one, but two major race tracks. The Chicagoland Speedway, which features NASCAR Nationwide and Sprint Series along with NASCAR Camping World Truck Series and just about five miles away is the newly developed Autobahn Country Club. 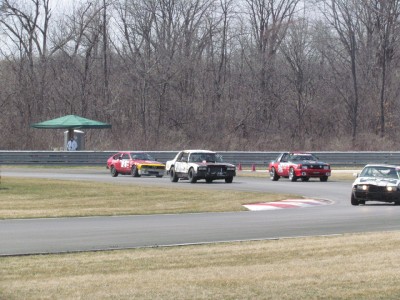 Built ten years ago the concept of a racetrack country club simply came from the golf course country club format that we are all familiar with. Mark Basso, President & Founder of Autobahn Country Club thought why hasn’t anyone combined the structure of a golf club with a road course? This prestigious road course country club features three circuits: North Circuit with 1.46 miles, South Circuit with 2.1 miles and Full Track which is 3.56 miles. The Autobahn currently has over four hundred members which is growing steadily. The track, designed by Alan Wilson, was to be safe and provide lots of racing room.

As the Central Region ChumpCar staff arrived Friday for Tech and registration, “The Windy City” was living up to its’ name with low forty degree weather and winds up to twenty-five miles per hour….but no rain in the forecast. By Saturday morning the clouds had moved out and the winds died down to provide a beautiful, sunny, and a little warmer day.

With the driver’s meeting done and teams doing last minute maintenance, the cars were ready to be on grid by eight forty-five. At exactly nine o’clock, with forty-five cars cleared for racing by timing and scoring, the green flag dropped for what we know was going to be an exciting seven hours of racing.

With the race started, Team #185, Crank Yankers with their 1995 Subaru Impreza, could only hear the power of the engines fly by as they were in the paddock trying to deal their own engine issues. Thursday, prior to the race, they just dropped a re-built engine into their car, only to find out on Friday that they were already having issues. On Saturday while half of the team was tearing down part of the engine, the other half of the team drove to Chicago to a junk-yard and was able to negotiate down the price of an old engine. Taking parts from the old engine, the team was working into the night to basically meld two engines together and in hopes to get out for the Sunday race.

As Crank Yankers were dealing with their engine issues, it didn’t take long before the 1987 BMW 325 of BuckSnort racing, who took an early lead, to come into the paddock to fix their broken tie rod. As these two teams were working on mechanical issues there was great racing happening on the track. Team #212 of 365 Racing Tuna No Crust (1987 BMW 325i) was enjoying their first ever ChumpRace, first time at Autobahn, and was enjoying the feel of being in second place! They really wanted to try wheel to wheel racing and find a series that provided fairly equal seat time to price ratio. After hearing about ChumpCar from another ChumpTeam, they got a car and finished it the week before the race. With only a few hours into racing they were already hooked and having a blast.

With half of the race over, the racetrack was already proving that it’s design of being safe and providing lots of racing room was holding true. Up to this point the drivers had only to endure a couple of full course yellows with cars getting off track and had to deal with the biggest culprit of the weekend….MUD! As cars got stuck in the mud, safety was needed to pull them out. But what happens when safety gets stuck in the mud? Another safety truck.

Throughout the day, the race was dominated by Bavarian Mustache Werks (1988 BMW 325is), Holy Rollers (1992 Honda Civic) and Fine Sausage Racing (1989 BMW E30). A battle of changing positions to get into the top five where between the 1991 BMW E25i of Bavarian Bulldogs, Car 190 of Tired Iron Repair (1990 Eagle Tallon), and Team Four Car Garage (1994 BMW 325is). However, unfortunately for Team Bavarian Bulldogs, a podium finish for today’s race was not in the cards as they spun out and tried to go off-road racing. As they got back on track, the driver feeling a vibration, came into the pits only to find mud in the left front wheel. Team Tired Iron Repair also would see a possible third place podium finish diminish as they would not be able to finish the race with a lost wheel bearing.

With about 10 minutes left of the race and the top three within a lap of each other a yellow flag came out as one car spun and another got caught up in it. As soon as the incident was cleared, no sooner did the green flag drop, another yellow flag had to be dropped for a spin. The race would finish under a local yellow.

The official Race Results for Saturday’s event were– 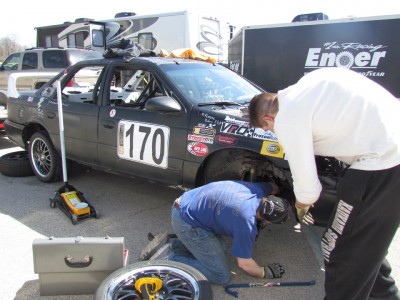 With Saturday’s seven-hour endurance race complete, Sunday morning featured another cool but partial sunny day of seven-hour race. As teams worked late into the night to fix mechanical issues, including Team Crank Yankers, they were pleased to report they would make the green flag for Sunday’s race.

As forty-one cars got on grid, even before the green flag dropped, it was not a good start of the day for Car # 700 of Team James Bondo in their 1980 Triumph TR7. Not sure if someone didn’t tighten the lug nuts, but all of a sudden there was a thud and the tire was rolling past the driver. Once the track was cleared, forty cars took the green flag.

Throughout the morning’s part of the race there was a good battle brewing between Car #125 of BuckSnort Racing (1987 BMW 325) who seems to have fixed the tie rod from yesterday’s race, and the # 66 of Holy Rollers in their 1992 Honda Civic. However mechanical problems would once again plague BuckSnort with a broken shock.

With just over two hours left to go in the race, the first place winner from yesterday’s race of car #661, Bavarian Mustache Werks, was making a run for it again wanting to double down and was currently in second, only 1.1 seconds behind #66 of Holy Rollers.

Having to take more time in the pits, Bavarian Mustache Werks dropped to third behind that of Team #51, British American Racing (1988 Hawk BMW), who throughout the day was very consistent and was working their way up through the positions. And with about an hour left that consistency paid off as they moved into first place with Holy Rollers on their tail by less than a lap. However there wouldn’t be enough time for the team of Holy Rollers.

The official Race Results for Sunday’s event were-

The Optima Battery ChumpCar World Series would like to thank all of its sponsors, Chump drivers, and Chump fans. We would not be able to do this without your continued support. 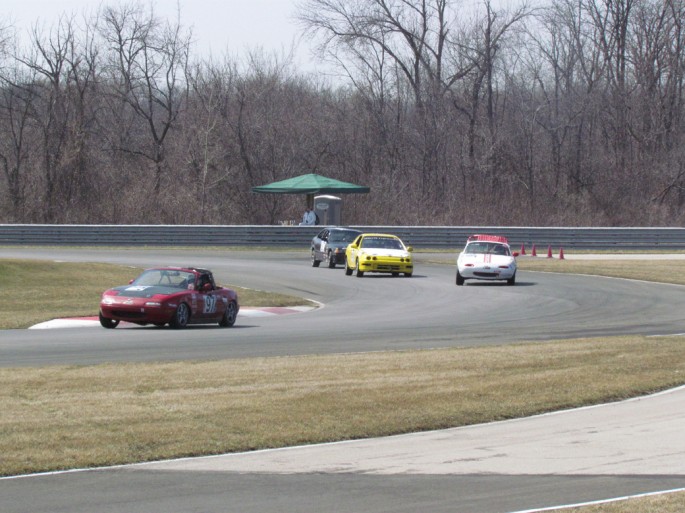 Celebrate The 10th Anniversary Of The Ford GT With This Awesome Video From CrankAndPiston.com! Craigslist Find: This Is The Most Oddly Modified 1972 Chevy Pickup Truck Ever