COMING THROUGH! Watch This Supra Take A Short Flight After Losing Its Brakes 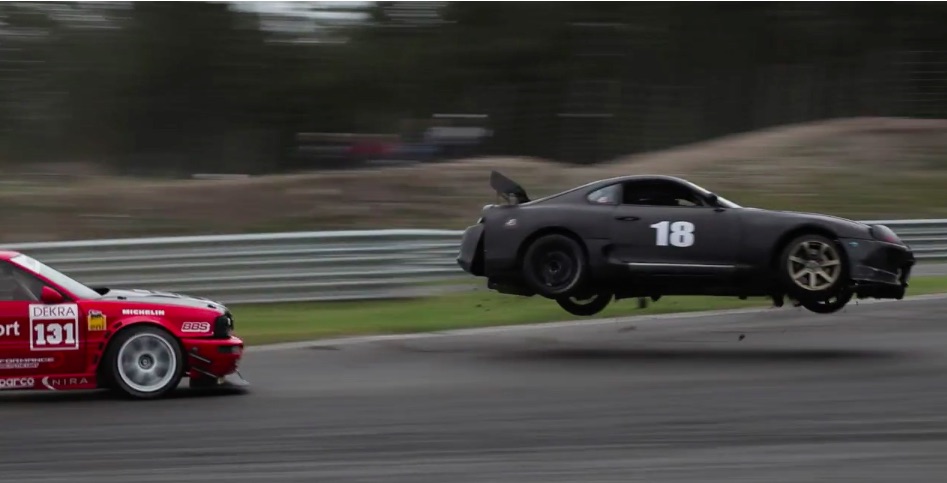 While most of us have never lost our brakes during a competitive wheel to wheel racing situation I’m guessing the large majority of BangShifters have had a brake related pucker moment in their lives. Mine was pretty scary and it involved a truck that weighed about 20 tons and had really poorly adjusted air brakes. Approaching an intersection (and going too fast) I had to give the truck truck lots of pedal to try and get it stopped in time. The pedal went over center and the truck was barely slowing. I laid on the air horns, pumped those things like my life depended on it (someone else’s might have) and still went through the light, weaving between crossing traffic. It was terrifying and I was going probably 22mph at the height of the horror. This guy? He had it way worse than me!

Coming down the long straight at Norway’s Rudskogen Motorsenter, his Supra is hauling some serious ass and when he goes to get on the binders for the turn at the end of the straight there’s apparently nothing happening at all with the brakes. He gets inside of the field, goes into the grass and then gets literally launched airborne directly across the front of the on coming race field! No one hits him but his car gets it pretty bad and ends up basically skidding into the sand trap on the other side of the course. Ironically as the car lands the wing snaps off the back and kind of bounces to the pavement. Good thing it survived the flight!

We give this driver credit for checking down, coming up with some sort of a plan, and not taking anyone else out with him when he knew that he was totally screwed. Imagine the chaos he could have caused had he tangled himself up with the rest of the field? Woah baby!

One thought on “COMING THROUGH! Watch This Supra Take A Short Flight After Losing Its Brakes”