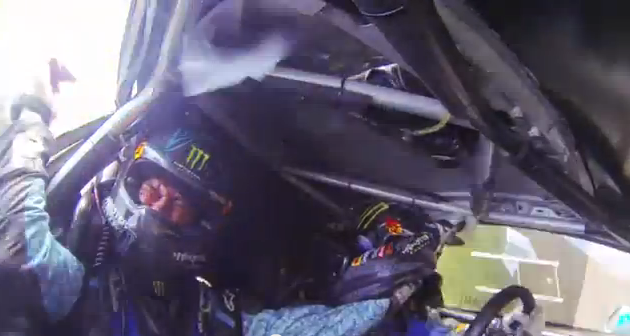 Lat year Ken Block shook off a crappy start to the Rally America season and came on like a ball of fire during the middle and late parts of the season. Things were looking good that Block would be able to win the series championship and complete a stunning comeback after virtually everyone had counted him out. Needing to drive on the absolute edge to win the Lake Superior Performance Rally, Block was giving his Ford everything that it could take and both he and co-driver Alex Gelsomino were keyed up and ready for the challenge…and then it happened. At nearly 100mph, Block came into a turn on a line that was to end his race and his season in disaster.

The best part of the video is Block and Gelsomino explaining exactly what happened with the crash and their reaction as it was happening on top of how they both reacted when it was freshly over. You’ll see that Gelsomino was knocked unconscious and his arm was clearly outside of the car during multiple rotations as the Ford barrel rolled over an over, shedding parts like the tires and suspension along the way. Amazingly, he did not lose his arm and it really is amazing that the car didn’t land on it or that it didn’t strike a rock, tree, or other natural obstacle during flight.

Block talks about a moment of confusion as the wreck began and then immediately being pissed as the car was hurtling through the forest, getting destroyed. For anyone who doesn’t give him credit as a racer, watch what he does as soon as the car stops….he tried to start the thing and drive away! The flaw in that plan is the fact that the wheels and tires, along with basically the rest of the drivetrain was spread like a yard sale across the forest floor. They show one tree that was showered with shrapnel when the car bounced off of it. This was a bad wreck, but both guys came out OK with Gelcomino experiencing a bad knock to the head.

We remember hunting for the video of this crash right after it happened, but Block was smart in sitting on it. Rather than simply release the in-car footage with no context, he chose to make a compelling video out of it that actually tells a story. The whole nearly 6-minute video is informative, entertaining, and pretty much free of lameness. Block isn’t goofy or aloof, he shows himself to be a passionate racer who knew exactly what was on the line that weekend at Lake Superior. They pushed all their chips to the center of the table and the cards didn’t fall in their favor. As Block knows, “That’s racin'”.

The Monster Energy Drink team is ready for their 2014 assault on the series and we know that they’re not going to be gun-sky or lacking for motivation.

PRESS PLAY BELOW TO WATCH KEN BLOCK AND ALEX GELSOMINO’S INCREDIBLE WRECK TO END THEIR 2013 SEASON AND TITLE HOPES – NUTS!

Frank Kozik's Poster Art Puts Cars and Music Together Like Nothing Else Gasser Video: Take A Video Tour Of A Homebuilt And Very Cool 1955 Chevy Gasser Known As "Bad Juju"