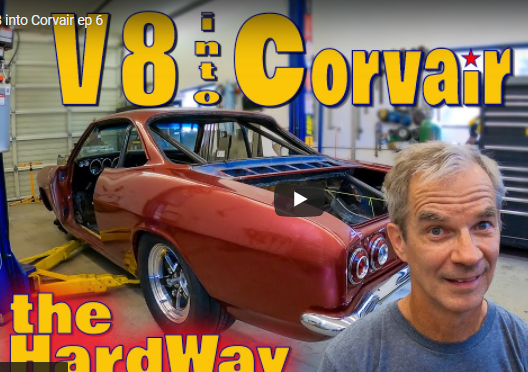 In this episode of the LS Swapped Corvair build, where the engine is still going to be in the rear as Chevrolet intended, more custom fabrication is going on. After all, when you do something different there aren’t bolt in parts for your project and this one certainly qualifies as different. It’s time for the control arms to start going together out back so check it out and see what you think. We think Ralph Nader is rolling over in his grave.

While I’ve heard of a few drivetrain swaps that practically bolt into other makes and models, that is not going to be the case when you are trying to put an LS4 into the back of a Corvair. These engines were in a front-wheel-drive application, with struts and steering and all kinds of other stuff that just wouldn’t be right in the rear of the Corvair. But the project is really starting to take shape and I know this one is going to be a hell of a cool ride when it’s all done.

How To Pinstripe: Pinstriping For Beginners With HotRod Jen! Historic Video: Watch Jerry Titus In A GT350 Battle Mark Donohue In A Camaro At The 1968 24 Hours Of Daytona