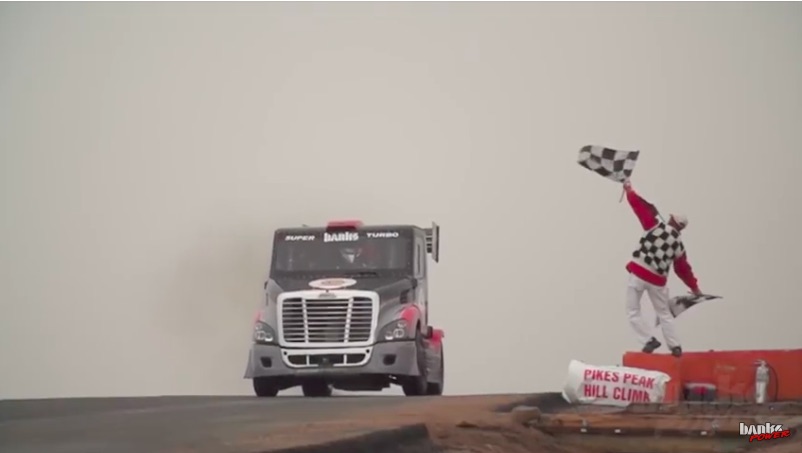 Mike Ryan and his brutal Freightliner truck are no strangers to the electronic pages of BangShift. We have showed this thing in videos, Chad has written about riding in it, and we’ve effectively worshipped the ground that the monster has rolled on. All this being said, the video you are about to watch is the most awesome one we have seen featuring this larger than life corner burner. Why? It captures the intensity, both inside the truck and out, of attacking the Pikes Peak Hill Climb at full bore as Mike did in 2013.

This was the awesome Banks Super Turbo engine which combined a turbocharger with a massive blower. The reason the truck sounds like a dentist’s drill is because of that hard spinning, screaming screw supercharger. It’s one of the freakiest sounding engines ever but the fact that it makes enough power to push this truck up hill like it has a rocket strapped to its ass gets us past the sound right quick.

The butt puckering moments here really come once Ryan has made some altitude and while the whole course is paved at this point in history, the lack of guardrails, the fact that it is raining, and the general openness of the mountainside is what adds to the intensity. It is one thing to drive up the mountain. Hell, even we could handle that. It is wholly another to charge up there, headlong. Driving deep into the corners, pushing skill and equipment to the edge of destruction.

Pikes Peak is high stakes poker. Even more so when you are trying to conquer it in a damned big rig.

Boosted Magic: Watch This Aussie Mustang Make 9 Dyno Pulls With Increasing Boost Levels - How Much Power? Find Out! Vote For The Final Team To Compete In The $10K Drag Shootout! Who Is Going To Take On Team Bigun And Team Enemies Everywhere?

2 thoughts on “Video: Ride With And Watch Mike Ryan Attack The 2013 Pikes Peak Hill Climb In A Freightliner – Insanity!”