Awesome Video: Saving A 1934 Plymouth Hot Rod That Was Hidden In The Basement For Decades! 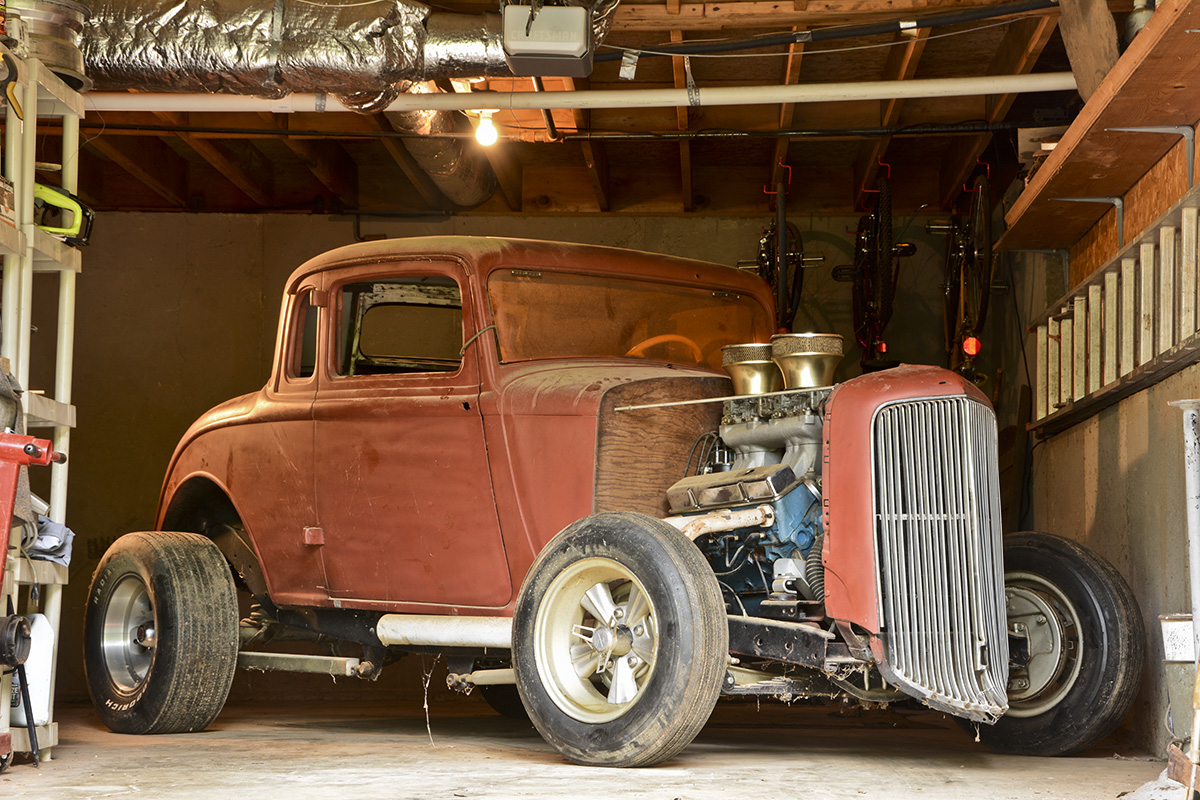 (Words and video by Tommy Lee Byrd) – In a time when it seems every barn, shed or field has been scoured, looking for the next great “barn find”, we’re pleased to announce that old cars are still out there. They might be in a great hiding spot, but there are many hidden gems out there just waiting to be discovered. The subject here is a 1934 Plymouth coupe that was built as a hot rod in the 1960’s and stored in the owner’s basement for decades. The car was not for sale, but I had easy access to it, as it belonged to my father-in-law. Through the years, we’d talk about the car, and it was always on the tip of my tongue to ask him if we could drag it out and get it running. He seemed to have filed away those memories and always put other projects in front of the coupe.

He built the car on a paper route budget while in high school, and used whatever he could scrounge up to assemble a running and driving hot rod. The car has a funky stance, and even funkier handling characteristics, especially when it had an early Hemi engine in it. The small block Chevy took place of the Hemi later on, but the car was still a handful to drive. With marriage, kids and life in general, the car went to the eternal back burner, but an enthusiastic son-in-law (yours truly) continually quizzed him about the car.

Finally, I did it…I asked him if I could haul the coupe up to my place so I could work on it. He obliged and the rest of the story is covered in this video. This is by no means a professionally produced video, and as you’ll see, the car isn’t exactly a professionally produced piece either. Enjoy the old pictures of the car from the 1960’s and 1970’s as well as a recap of the work that I did to get it back on the road. I enjoyed turning wrenches on this thing and really enjoyed seeing my father-in-law get behind the wheel of a car he built more than 50 years ago. I have plans for future refinements and modifications, but for now, this car serves as a perfect representation of a real deal high school hot rod that was hidden away in a dark corner of a basement.

Video: This LIVE NHRA Today From The 1992 Chief Auto Parts Nationals In Texas Is Awesome Cool Video: Travel The Same Path Air Does Through A Rolls Royce Locomotive Diesel Engine

9 thoughts on “Awesome Video: Saving A 1934 Plymouth Hot Rod That Was Hidden In The Basement For Decades!”