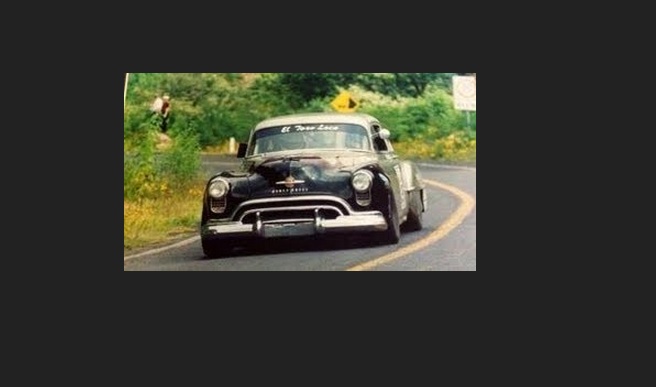 While the modern version of La Carrera Pan Americana may be different than the original, there’s still lots about it that have us really wanting to see it in person some day. There’s the roads, which are the same bendy, dangerous, undulating ribbons that brought and early end to lots of cars and many lives during the heyday of the original race and of course there’s the cars. Guys are building some amazing stuff to run the race these days and perhaps few of those cars are cooler than the 1950 Olds bodied machine featured in this video. We gave you an outside shot to see in the lead but the video is all shot from inside the car. We wanted to show you exactly what was being thrown through these corners with such screaming ferocity.

While there is 1950 Olds sheetmetal on the outside, there’s not much Olds left under the skin. A tube chassis, an 18-degree headed small block that displaces all the world and sounds like it would have powered a professional stock car is making the power under the hood, a Richmond transmissions handles the gear changes, and there’s a 9″ Ford axle out back. The car weighs a reported 4,200lbs at race weight and it has a top speed of some 180mph flat out on the open road. In short, this is one of the most fully bad ass things we have seen in a long time.

Wait until you sere and more importantly hear the car work though the amazing roads of the La Bufa section of the event. In several places the roads fold back on themselves and then there are a few nice stretches where the driver can let that 358ci small block dig in and get some work done. The noises from the start to the screaming finish are spectacular and to have it all wrapped in a 1950 Olds body? It doesn’t get any better!

PRESS PLAY AND WATCH THE CAR WORK THROUGH THE CORNERS BUT DON’T FORGET TO CRANK THE SPEAKERS!

Small But Classy: This 1953 Nash Rambler Country Club Hardtop Stole The Show At LS Fest Watch To See An Idiot With A Cutting Torch Collapse A Bridge And Manage To Walk Away