Turbo (Not So) Twins: These Late 1980s Odd-Ball GM Imports, The Chevy Sprint Turbo and Spectrum Turbo Are Weirdly Fun 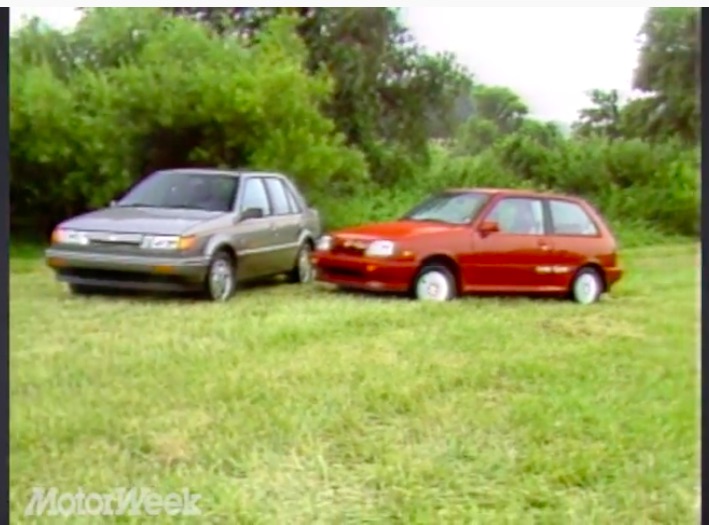 Who knew that in 1987 Chevrolet was selling not one but two different turbocharged cars?! Long forgotten by most (us included) is the fact that Chevrolet was importing an Isuzu sedan with a turbocharged 107hp four banger and sold under the Spectrum name as well as a 70hp, turbocharged and intercooler three banger Suzuki called the Sprint hatchback! The Isuzu we never remember as being sold as anything but a Chevy but the Suzuki would be sold as the Swift if not at the same time for years after the Sprint was a thing.  While neither of the cars is very good by today’s standard, looking at their performance objectively through the lens of someone who would have been car shopping in 1987, you can actually see some good in both of them.

The Spectrum is the larger and more pokey of the two, even with the more horsepower. It is funny how a high performance or improved suspension is mentioned and then the car is showing kind of wallowing and plowing its way around a road course. Funny stuff. We don’t get a lot of performance data on the Spectrum here but we do on the Sprint so let’s concentrate our energies there.

The fact that this thing ran in the low 17s on the strip at this time is significant because the little car that others would have laughed off the road would run neck and next with loads of stuff in this period. No, the Mustang and Camaro were not threatened but the V8 sedans that were out there? Those things would have been sweating this little car, pesky as it may seem.

We’d not want to own either of them now but at the time they were built, if someone needed a commuter car that got good mileage and put a smile on your face, these suckers had it right!

Press play below to see this review of the 1987 Chevy Sprint Turbo and Spectrum Turbo!

Own A 1965-1966 Mustang? Here's How To Install A Borgeson Power Steering Upgrade Kit! Video - 2020 NHRA Lucas Oil Winternationals Photo Coverage: Images From The Pits In Pomona!

2 thoughts on “Turbo (Not So) Twins: These Late 1980s Odd-Ball GM Imports, The Chevy Sprint Turbo and Spectrum Turbo Are Weirdly Fun”