The Dirty Cougar: Waking Up A Sleeping Cat For Another Season 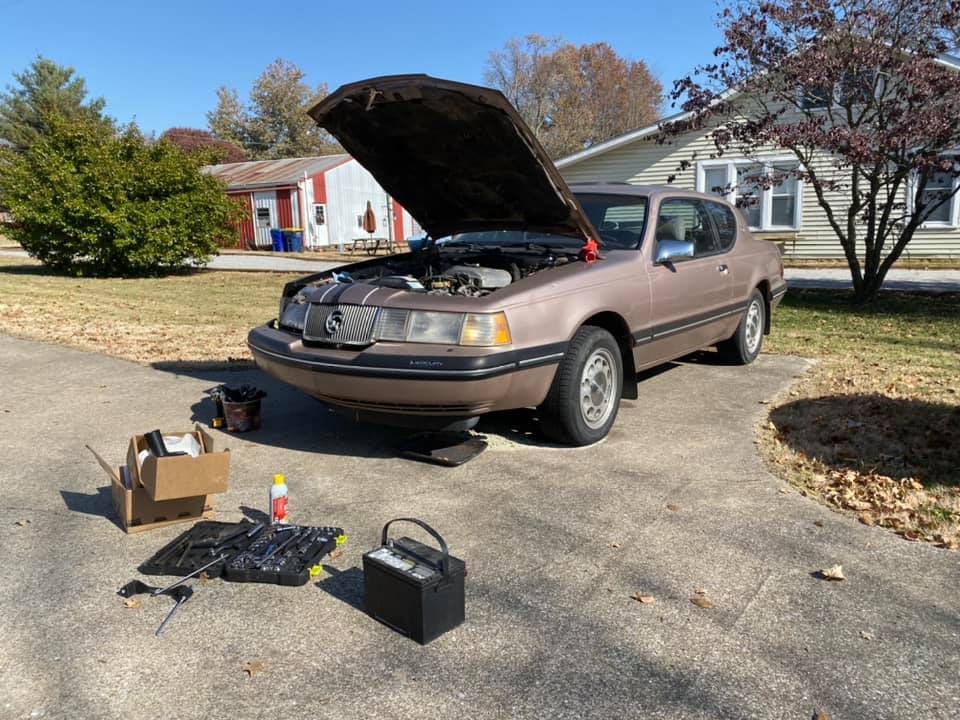 Surprised to see this beauty again? Trust me, you aren’t the only one. The 1987 Mercury Cougar LS that we recovered from an Indiana backyard after a ten-year slumber, coaxed back into life, and promptly kicked the guts out of at NCM Motorsports Park’s King of the Heap event last winter is still alive and in one piece! Yes, in the last update we said that it would be the last installment of the Dirty Cougar project, and that’s accurate enough for one reason: we had been keeping a financial tally of the money sunk into the car just to get it up and running, and the final total at the end of the March 2019 KOTH race was $1,266.19. That’s everything from the purchase of the car to touch-up paint for the rear bumper trim. Not bad for a legitimate 5.0L powered Fox body. With that said and done, the Mercury languished around BangShift Mid-West until early summer, when I made a handshake deal with one of the teammates from the KOTH event. Chris Conn is now the owner of the Cougar and as the December 7th, 2019 date for the first race approaches, we decided it was time to dig into the sand-colored cat and see if we could give it some more life.

Need a refresher course on the Dirty Cougar project? CLICK HERE for the full story!

The Cougar has been parked for most of the second half of the year because the car’s biggest Achilles’ heel, the electrical connector that’s behind the key tumbler, is getting progressively more and more worn out and needs to be replaced. That job requires a rivet gun, a drill and time. But there are other issues at hand, including a power steering unit that leaked so badly we almost got black-flagged from racing. We have a list of things we’d like to do to the car, including a 4.10 Track-Lok gear setup for the rear axle, some engine modifications, suspension that actually works and so on and so forth, but safety is key and we’re both on shoestring car budgets with other builds going on. So, consider this a first-look for this year’s cheap-car racing return story. 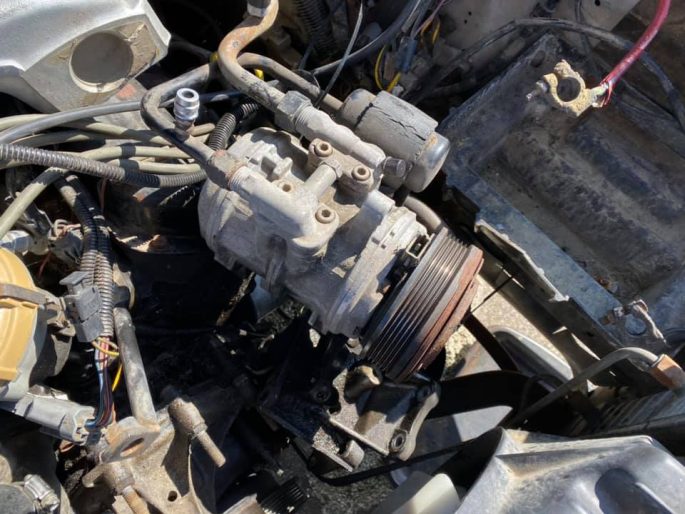 First off: moving the air conditioning out of the way to access the power steering pump, which was seriously damaged. Do we really need air conditioning? The car was converted to R134a refrigerant in 2006, but the compressor’s clutch is royally fragged and it’s added weight. We keep fighting over whether or not to leave the Cougar more street car or go more race car. For now, the A/C stays put. 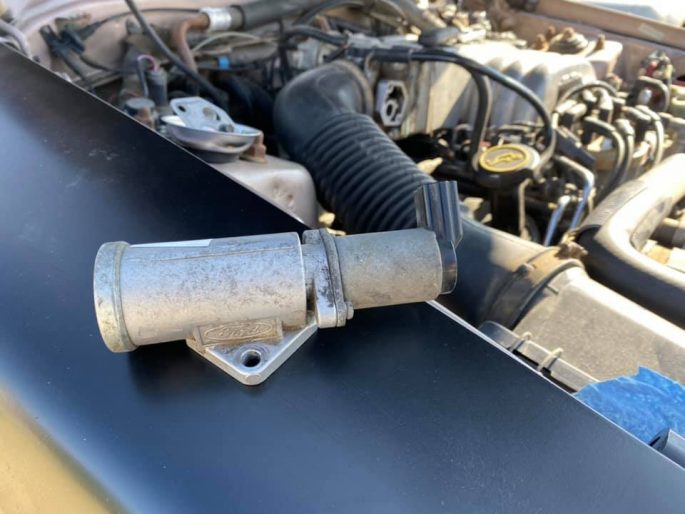 Meet the Idle Air Control Valve (IAC). It’s a two part system: an electrical motor and a valve that allows air in to keep the idle happy. These can be carbon-fouled, and ours was no exception. If unplugged, the idle was crap but the drivability was great, and vice versa. 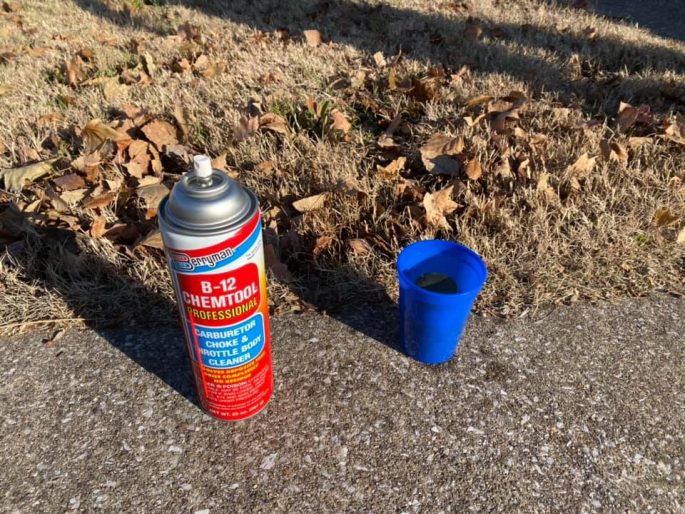 Carbon-fouled, you say? Let me introduce you to my li’l friend… 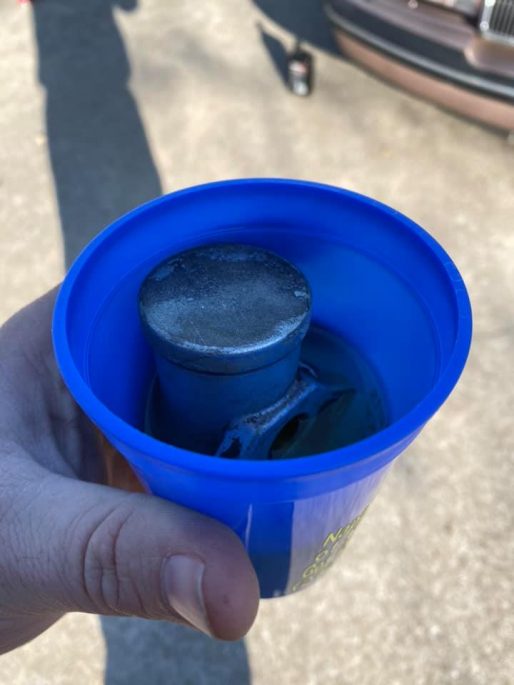 Unable to find a new IAC quickly, we decided to bathe the valve portion in B-12 cleaner to see if the carbon would break up easily enough. This is a Hail Mary approach, and I’m still amazed the chemicals didn’t melt the cup. But a two-hour soak in the solution followed up by a blow-out had the inside of the IAC moving and shining brightly. 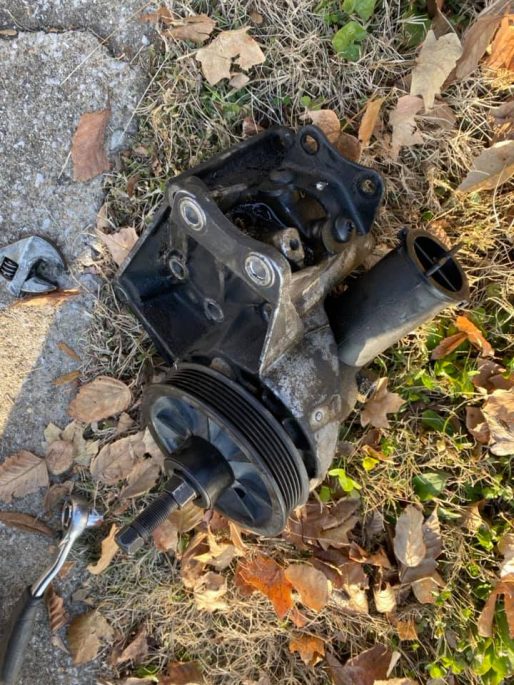 No, that’s not a supercharger, that’s the siren song of every Ford everywhere, a whining power steering pump. We nuked this unit badly last year, running it dry so we didn’t leak everywhere. Time to replace it… 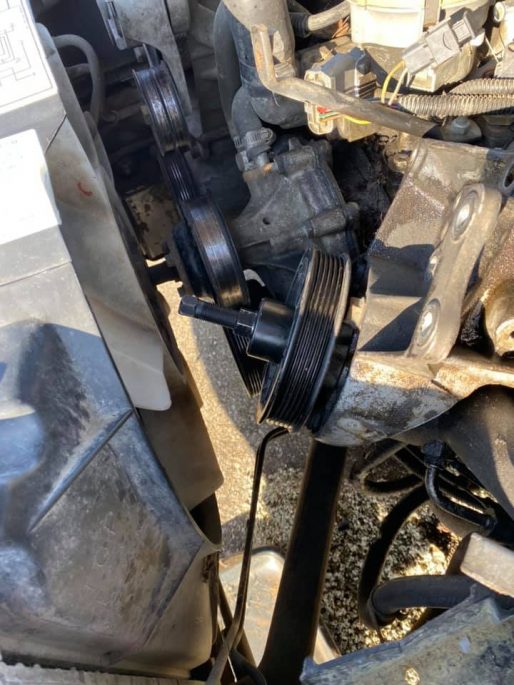 One new pump and some time spent with my impact gun for the pulley later, the system was bolted up…well after dark. The IAC fix is half-tested…the car idles great now, but we weren’t able to take a road test. Why not? Because during the burping of the power steering system, we found leak #2: the return pressure hose was a geyser when turning. We have new hoses, but we ran out of daylight for this session. They will be replaced, and we will make sure that our front rotors aren’t too warped from last year, and we should be good to hit the track. KOTH, here we come!

7 thoughts on “The Dirty Cougar: Waking Up A Sleeping Cat For Another Season”