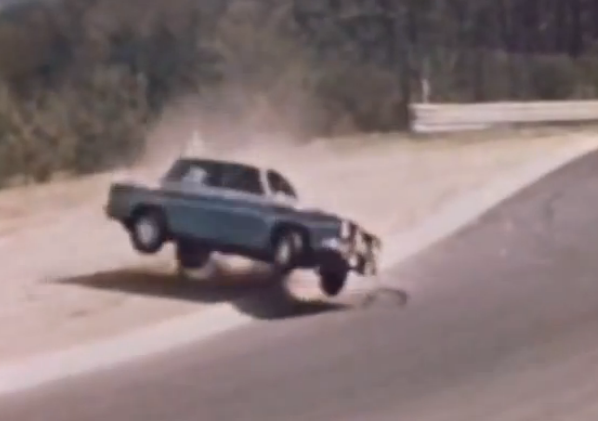 This is a pretty amazing video. It was shot in 1970 at the Adenauer Forest section of Germany’s famed Nurburgring and it features a non-stop reel of amateur drivers wrecking their vintage junk in one series of turns. To say some of these crashes are horrifying would be the understatement of the week. The ‘Ring has been open to the public since the late 1920s, so anyone can pay the fee and go try to drive like Enzo Ferrari around the thing. Unfortunately, most people only have the skill level of Ronald McDonald.

You’ll see Ford Capris, BMW 2002s by the truck load, VW Beetles, Porsches, and a bunch of other small, weird Euro stuff eat it big time in this video. Pay attention to the crashes where people were not wearing seatbelts and got flung clear out of their little cars! Also, it seems like most of these people were out doing errands or maybe they were traveling in their cars because when they roll and smash out the windows, there’s groceries and clothing (among other things) flying all over the track. If there is one major indictment in this video it is of the swing arm style rear suspensions that appear in several of the machines.

When the cars get out of shape and begin to load and unload their suspensions, the swing arm style cars literally launch themselves off the ground. You will see people get thrown right out of their cars (and hop up thankfully!) others are hanging out windows, and still more are climbing vertically out of doors that should be used in a horizontal fashion. This is really wild stuff and it sure highlights how far we have come in the vehicle dynamics and safety end of things.

Even the worst car being made in Europe today is about 1,000 times better than the little tin cans you’ll see in this video.