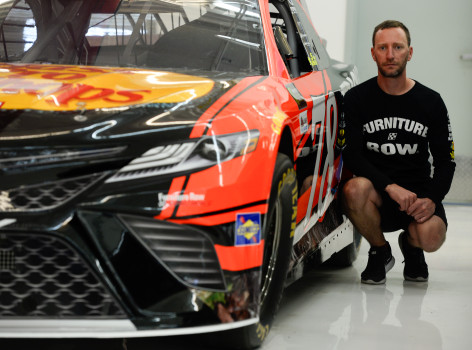 Back in early 2017 when Carl Edwards announced his sudden (and now seemingly permanent) retirement from NASCAR stock car racing, it slackened jaws around the sport. Well, it has happened again. Ace crew chief Cole Pearn has retired effective immediately from Joe Gibbs Racing and his decision was not driven by money, a poor working relationship, or anything negative.

His decision was driven by the want and need to see and spend more time with his young and growing family. Often times we hear people forced to resign or leave something cite “family reasons” but for Pearn, there’s no negative connotation to his move. The life that NASCAR crew chiefs and competitors lead can be seemingly glamorous but at the end of the day it is a carnival act. Crew chiefs are doubly hammered as they are also carrying far more responsibility away from the track than a driver does. Whereas the driver can blast off on Sunday night to wherever he wants to be, the crew chief is yoked to the team and the office for the length of what is the longest season (end to end) in all of pro sports.

This announcement was a big deal not just for the reasons but for who Pearn is and what he has accomplished. He and Martin Truex Jr. won the NASCAR championship in 2017, they were the runner-up team this year winning three races in the playoffs, and over the last five years have nearly two dozen wins, a pile of top five and 10 finishes, and worked together like the gears inside a Swiss watch.

It is pretty rare in motorsports to see this happen and that’s why everyone is making a rather large deal about it. Once a young guy like Pearn who has obviously dedicated his life to this stuff gets that championship taste, it normally hooks them for the long haul, as history has shown.

Just because he left does not mean he doesn’t love the sport, it means he loves his family more.

Here’s the full story from the crew at NASCAR.com

Ride Along Video: Attack Bristol In A Super Late Model and Crank Up The Sound Classic YouTube: Loaning Dad The Car In This 1975 DieHard Advertisement