A Tucker On The Dyno?! Watch Tucker 1044 Make A Pull With Its Franklin Helicopter Engine! 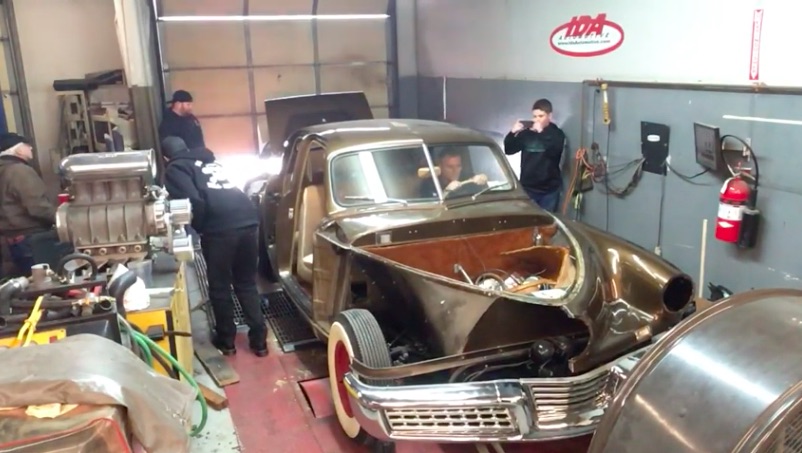 Not that we’re breaking any news here but Bob and Rob Ida are two of the most amazing automotive craftsmen in the world today, certainly among the top one tenth of one percent in the USA. These guys are a father and son duo that have crafted, restored, and modified, and amazing number of cars over the years. Their work with Tuckers both in their restoration and recreation is well known so we probably should not be surprised to see that they had one on their Ida’s Automotive dyno but they did and this rules all.

So Preston Tucker chose the Franklin Engine Company’s 335ci flat six to power his forward looking cars in their famed 1948 production run. The guy so liked the company that he actually bought it! Tucker owned Franklin into the early 1970s but that is another story for another day. The normally air-cooled engines were mostly used to power helicopters. He had the engine converted to liquid cooling and really not much else was done. Weighing only about 300lbs and producing more than 100hp (at the flywheel) these were low RPM engines designed to make torque at a good rate and keep helicopters in the air for as long as they needed be there. A compact engine that was about 37-inches long, 30-inches wide, and 21-inches tall, it fit nicely in the rear of the Tucker, lending to the car’s flowy styling.

This dyno pull was made at the start of the restoration and while we do not think that there are many high mileage Tucker examples out there, we’re guessing that this Franklin engine was a bit on the tired side. It made 94hp to the wheels and 221 lb-ft of torque. Certainly enough to move the car down the road but there’s likely more to be had with some freshen up work during the resto.

The thing sounds cool through the six exhaust pipes!