Unhinged: Drifting In Iraq And Why It’s Important 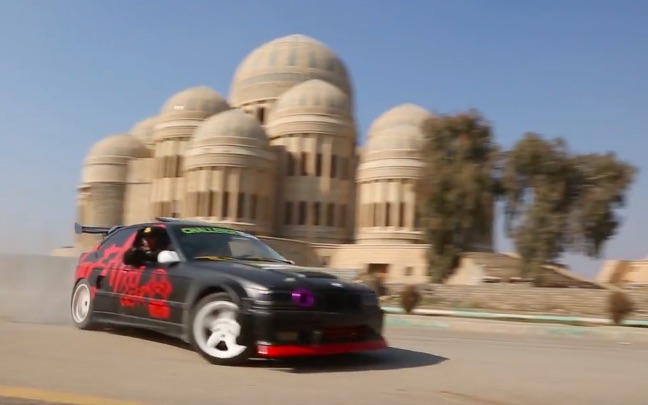 I have a question for you: can you identify anything about the country of Iraq that doesn’t involve any tie to a war? Think back twenty, thirty, forty years. It is difficult, isn’t it? You don’t hear much about the cultural icons within the country, or anything about the Iraqi heavy metal band Acrassicauda (look them up if you’re into the music!) I didn’t know Iraq was a country until the invasion of Kuwait, when I watched the news after school with my siblings. That was my first introduction to the country: HMMWVs rolling through the desert with oil wells burning in the background. As the years moved along there were cruise missile strikes, Operation Desert Fox and then, there was the morning meal on Fort Hood. As I was trying to choke down the morning meal of eggs, bacon and fruit, the news report that informed America that Iraq was being invaded by military troops played on the air. In that moment, I knew that within months my boots would be in that country…it was a given. And sure enough, in early 2004, I was in Iraq, and for a total of twenty-six months between two tours, I got to enjoy the country of Iraq whether I approved or not.

Truth be told, whenever I ask about my experiences there, I tend to more often than not speak of my deployments in a positive tone, which throws people off who are expecting to hear the usual litany of mortars, car bombs, and general wartime stories. Here’s everything in a nutshell: to me, it was a vacation with some assholes with bombs trying their best to ruin the party. I found Iraq to be a peaceful place, if you believe me or not. Many an evening was spent on either a repurposed aircraft hangar’s roof or the platform above my platoon’s shop on the flightlines where I worked, enjoying a sunset, or at night on the active pads with helicopters and cargo jets breaking up the monotony. What interaction I did have with the locals was positive as well: they are weary of war, more educated than you would ever expect, and simply want the same things in life that anyone else would want.

My last deployment placed me on Mosul International Airport, which was better known to myself as FOB Diamondback. You could throw a rock and hit something in the city, no problem from where we were at, and if you listened closely during the day, you’d hear people just going along their business for the most part. From my perch on top of a shipping container that doubled as the animal house for the band of misfits I called family for fifteen months, I often wondered what the locals actually did for fun that we’d never know about. Those thoughts crept back into my mind when, six years after I left the airfield, ISIS overran Mosul. You don’t need a lesson on how bad things got during the last few years, I’m sure, but you don’t hear about the positive stories. Well, here’s one: while embedded with Iraqi special forces, Buzzfeed News managed to catch some drifting taking place in Mosul using a BMW 3-series that sounds to be packing a stomping V8. In a city as war-torn as this, it warms my heart to see people using a swapped BMW drift car to raise enough hell that it irritated ISIS fighters enough that they send drones with bombs to shut them down. It is certainly a dangerous game, but if you are living like every day might be your last…well, if I were in their place, I wouldn’t change a thing. Send the drones, send the bombs…see if you can keep up.

Remember Bigfoot and USA-1 Racing Down Lanes of Crushed Cars At Gateway Motorsports Park In 1983? Let This Video Remind You The Hyundai iMax N Concept Van: Hang The Tail Out With Seven Of Your Friends!

One thought on “Unhinged: Drifting In Iraq And Why It’s Important”