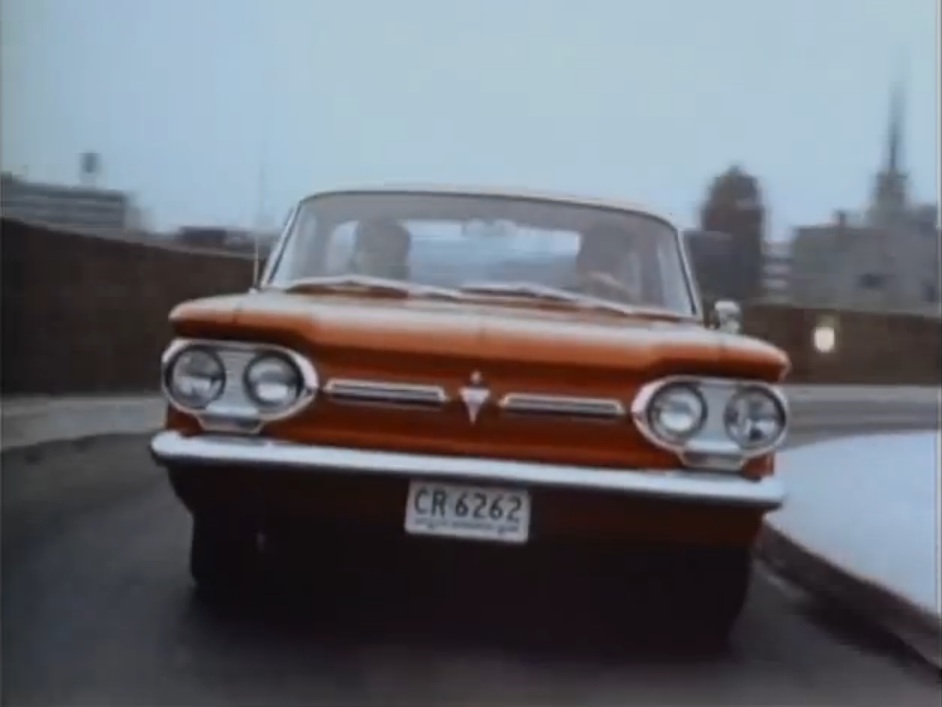 We seem to run across factory promotional films for the Chevy Corvair at a rate that far eclipses other models in GM history. There’s probably some good reason for that. Firstly, the company had packed so much technology into the car that was foreign to domestic car buyers that they had to educate them on all aspects. From the fact that the engine was in the back, the fact that it was a flat six, the fact that it had a unique at the time swing-arm suspension, and in this case that the Corvair Monza wore a turbo, there was lots of tell the public about in order to get them into showrooms to check the car out. We all know about Ralph Nader and that stuff but the reality is General Motors did more to educate their customers about the Corvair than they did for any model previous to its introduction.

Many of the films we have shown touted the toughness and robust nature of the car. We have shown it heading through the jungles of South America on one of the most non-sensical missions ever, we have shown it driving through steams and woodland scenes here in the USA, and while those are cool, this video is even cooler because it touts the Corvair as a performance car with its unique for the time turbocharger. In this video we see a couple enjoying the car in the country side, entering a rally, slogging through mud, and ultimately speeding up a drum shaped parking garage ramp. All the while a cheery announcer tells us about the cool stuff that the car can do or the new innovations that are packed inside it. We particularly like the scene where the driver is banging gears in the four speed although his hand position borders on the weird.

There are people who think that the Corvair was some sort of big failure. Truth is that it wasn’t. The model was sold for nearly 10 years and at strong volume for Chevrolet. The one thing that really killed it? The Camaro. When that thing showed up in 1967 it ate up a ton of potential Corvair sales and the idea of the sports, European style offering was lost in the plumes of tire smoke from hot small block and molten big block powered entires flying around the highways and byways of America.

This video is a good one!

PRESS PLAY BELOW TO SEE THIS 1962 CORVAIR PROMOTIONAL VIDEO FROM GM – GOOD STUFF!

Listen Up: Conversations With Matt Smith and Justin Ashley On This Episode Of The NHRA Insider Podcast Hot Hatch History: This Look Back At The Hot Hatches Of The 1970s Is Great - No, The Golf GTI Was Not First