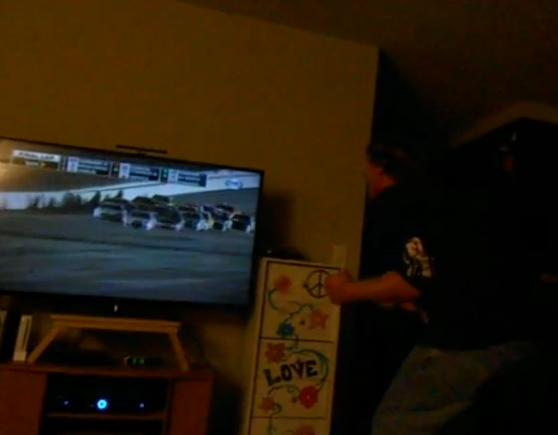 While we don’t have a “favorite” in NASCAR we enjoyed the fact that Dale Earnhardt won the 2014 Daytona 500 and it sure seems like a good thing for both the sport itself and certainly for his career. He’s the most popular driver in the series, even though he hasn’t really been racking up wins left and right. To us, the best thing about him winning was the absolute sincerity of his reaction. You could see joy in the man’s eyes. It wasn’t about breaking some curse or proving that he was good enough to compete, this was a guy who was happy as a ping in BLEEP to win the race. It was really, really cool to see. For us anyway we wish that we could have reached through the TV set and given the guy a high five and a man hug. It was cool to see a race car driver get out of the car and not have to “perform” for the camera, it was all real and all really cool.

The neat thing is that tens of thousands of you were going berserk watching him win the race and it seems that lots of you made videos of your family, your husband, your kids, or a drunken neighbor going totally off the deep end when the race was over. We love these videos because (A) lots of them are funny as hell and (B) it proves that there are people out there who are still REALLY into NASCAR. These are the types of reactions that people have watching the NFL, NHL, etc, so it is really neat to see people losing it over a car race. Is there another series in the USA that car say they have the size of the audience and dedicated fan base that NASCAR has? We’re not sure that there is. Oh, and how many of the little kids watching along with their dads will grow up to be passionate NASCAR fans because their pop loved it, too? We bet lots of them.

We’re not laughing AT these people, we’re laughing with them. From the mild to the completely lunatic fringe, the reactions are honest and Dale Jr. sure has some rabid fans out there!