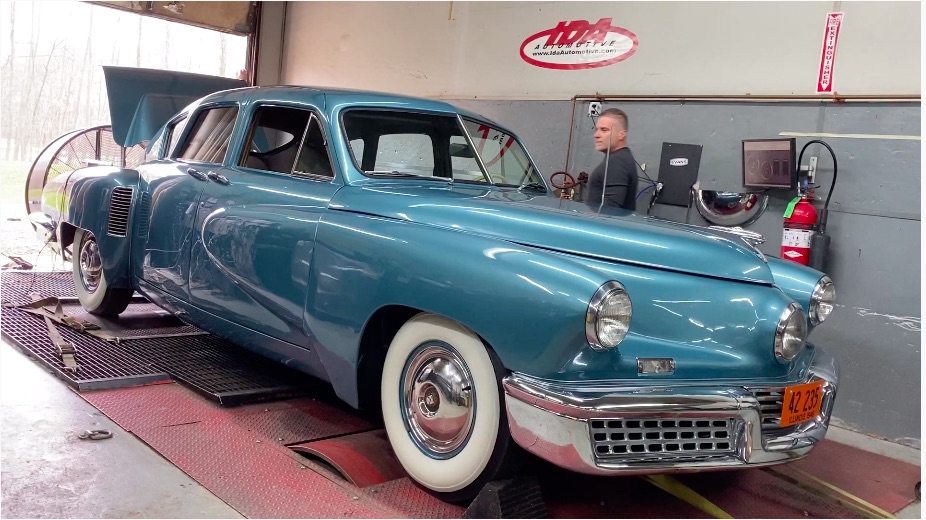 We don’t need to recount the story of Preston Tucker and his forward thinking car which was the talk of the late 1940s. The company produced a few dozen models before financially foundering and going out of business. After that moment, the company entered the world of American automotive lore and has achieved a level of mythology that even visionary founder Preston Tucker couldn’t have foreseen. The cars had loads of innovative features and ideas back then and while the numbers of them that were built are really small, their notoriety is off the charts. That’s why our eyes got big when we saw that the boys at Ida’s Automotive stuck a real on one the chassis dyno to see what kind of power it made!

Bob and Rob Ida are awesome guys who are among the most talented craftsmen and mechanics in the country. Rob has recreated Tucker cars, he has done stunning work on all kinds of exotics, Porsches, and hot rods, and his dad is a drag racing and land speed racing legend. Other that that? Two totally normal guys. Look, these dudes bought a new Ford GT and immediately took it apart and modified it. Not kidding.

Anywho, the Tucker on the dyno. These things were powered by a air-cooled flat six engine that was made by a company called Frankin for airplanes. Measuring out at about 350ci, the idea was to have something torquey and reliable. Aircraft engines tend to be both of those things and the wild design that Tucker was wanting to use to power his cars was turning into a nightmare, hence the Franklin. The company had to rework a bunch of stuff in order to make the engine suitable for a car but they did and these became the defacto Tucker plant.

So what does it sound like? What does it make for power? Watch this video and see!

Dusty But Trusty: Waking Up A 1971 Dodge Dart Swinger That's Super-Original! Buick V6 Build Part 3: Whoops, Missed A Step...Here's How The Heads Were Dealt With!