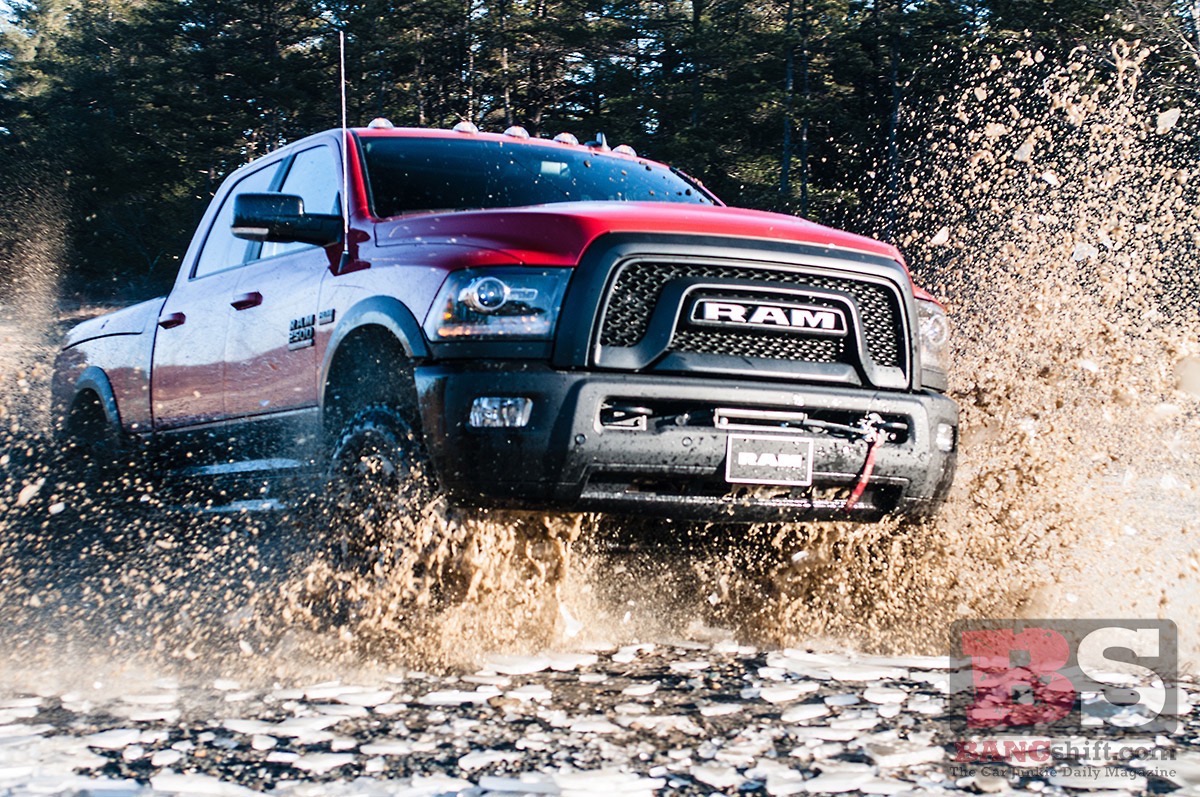 (Photos by Dave Nutting and Tony Sestito) – Athletes come in all shapes and sizes. From the string bean marathon runners to the brutes that power lift twice their body weight, there’s a lot of ways to be physically assertive and capable. The same goes with trucks, especially the specialty offerings from Ram and Ford. Of course Ford has their Raptor which is a half ton truck that comes delivered in a form capable of running the Baja if you want to. It is lithe, it is cool, and it is about being nimble and fast. Ram has their 2017 Ram 2500 Power Wagon which is about being a mechanically brutal, unstoppable, and overpowering force. The Power Wagon and the Raptor are both great trucks but they are on opposite ends of the “athletic” spectrum.

We recently got our mitts on the big brute from Ram and the guys at Ram nearly had to call in a hostage negotiator to get us to give it back. You don’t often hear the company pitching the Power Ram in the media or in ads because frankly not everyone needs this truck. Everyone wants this truck, but not everyone needs it and those that do both want and need it know where to find it. We drove this truck for a week. We cruised it on the highway, took it into the city, but most importantly we took it to the BangShift secret off road test center and put the big fella though the paces as best we could. It delivered. Oh boy did it deliver.

Come with us and check out the most beastly stock pickup truck your money can by right this second. 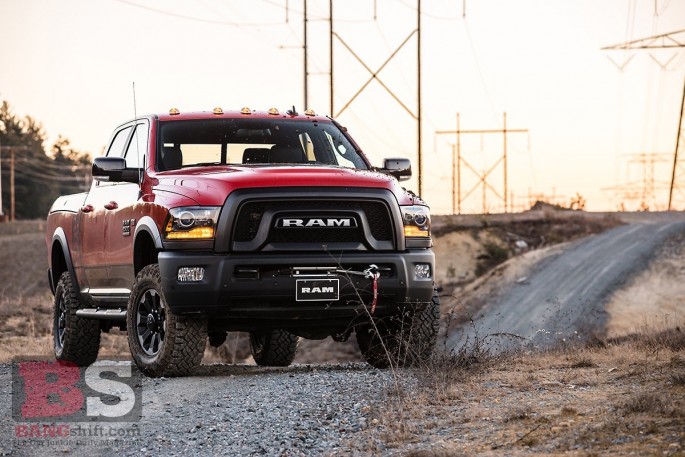 We going to lead with the money end of things because for many people that’s a bottom line decision making “make it or break it” number. The price of our truck as tested was $63,115. That’s a lot of money but this is a lot of truck and you can spend WAY more for WAY, WAY less out there. To use a same brand  example, we recently tested the Ram Rebel which was a truck with a V6 engine and none of the hardcore, functional, and bad ass equipment that this truck had and it stickered for $50,400. We have tested GMC trucks that stickered in the mid-$70k range and were barely capable of backing over a flowerbed.

There’s a bunch of stuff that we would cleve off that list if we were buying the truck. The interior was really nice and comfy but if we could save $5,000, we would. It would not be hard to take this truck down into the middle $50k range and while that is not expensive, you are getting more capability than anything you can currently buy brand new. Notice what was not on the option list…everything that defines what this truck is. 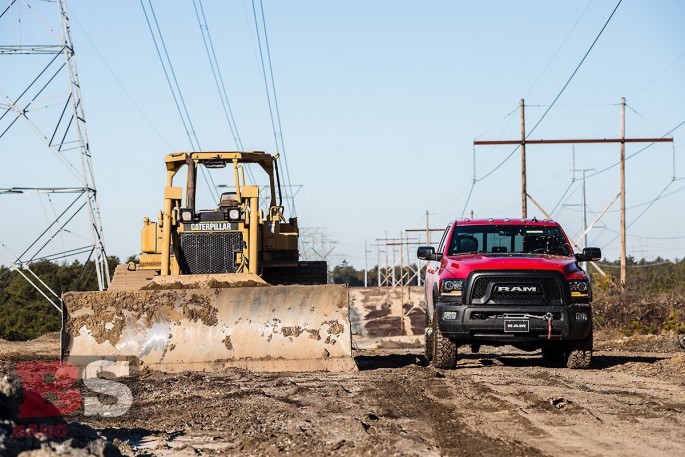 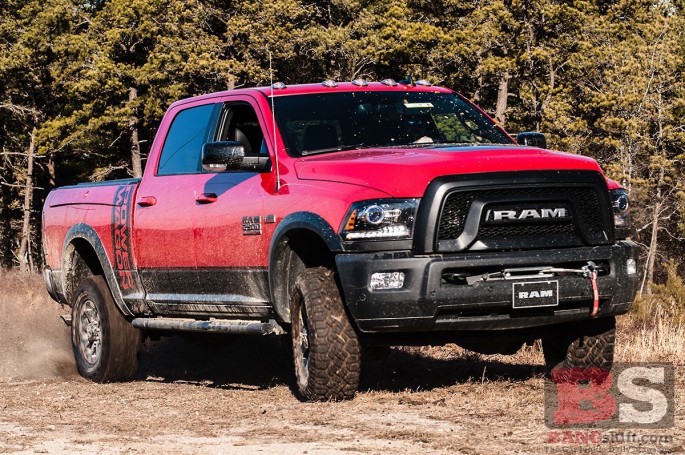 So we have gone over the optional equipment which is all fine and dandy but that’s the comfort and dress up stuff. What makes a Power Wagon a Power Wagon is the guts. This is not a sticker package or some half baked factory scheme to convince you that the truck is bigger, tougher, and more gnarly than a standard rig. It is.

Moving from front to rear there’s the 12,000lb Warn winch that’s built into the factory bumper seamlessly. One of the reasons that this truck does not and cannot have a Cummins inline six engine is the fact that the length of the engine would cause the winch to be deleted. That’s a deal breaker.

The engine is a 6.4L Hemi and it is rated at 410hp and 429b-ft of torque. That power is transmitted through a pair of AAM axles. The front axle has a 9.25 inch ring gear and the rear 11.5 inches both have 4.10 ratios and lockers in them. Those axles are part of a suspension system that allows for more than two feet of total wheel travel, which is insane for a stock truck. Riding on coil springs and Bilstein shocks all the way around, the coolest features of the front end are two fold. The electronically disconnecting sway bars and the Articulink suspension. Where the front control arms mount to the axle there are special high movement Articulink joints that allow the kind of flex other stock trucks can only dream about. 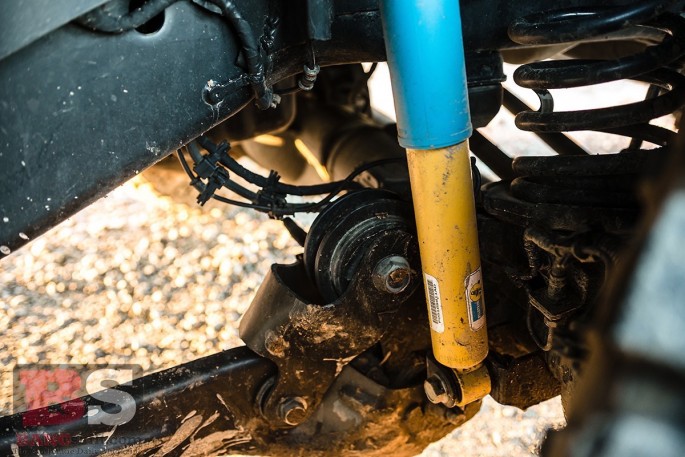 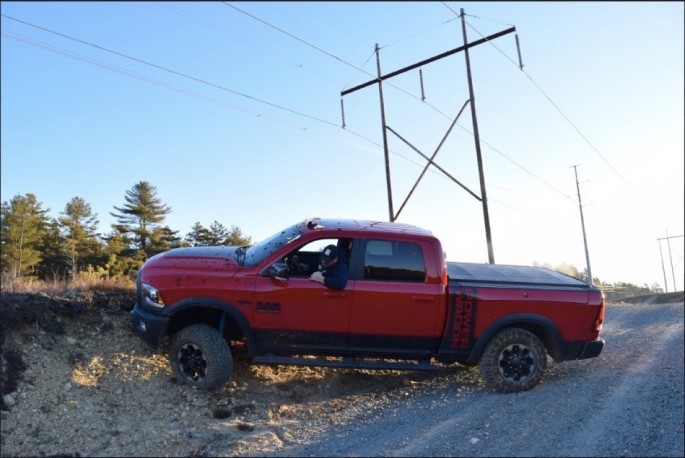 The transmission is a six speed automatic and it can be held in gear when off road which really helps in situations where you are trying to steadily climb of build some wheel speed in sand or mud. The transfer case is a Borg Warner 44-47 that is the same used in other Rams. Max crawl ratio is 35:1 which we found to be good for everything we tried (and succeeded) in doing with the truck. Descent control helps when crawling down steep grades or over terrain where following a specific line is necessary. Oh, the best part is the big lever coming up through the floor to shift the truck in and out of four wheel drive.

Functions like locking the axles and disconnecting the sway bars are handled by the dash mounted buttons and dial. 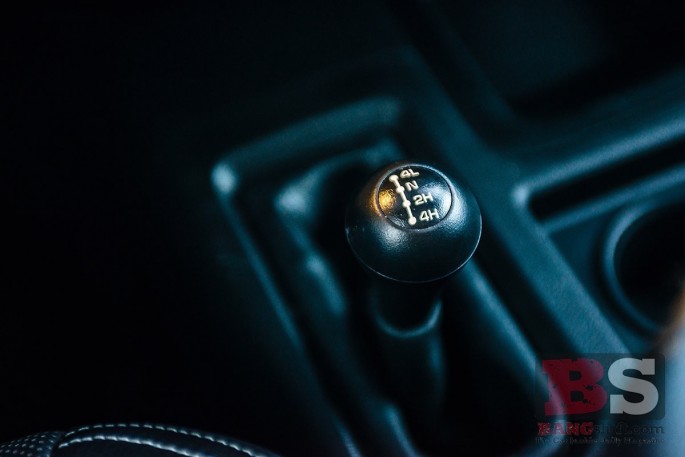 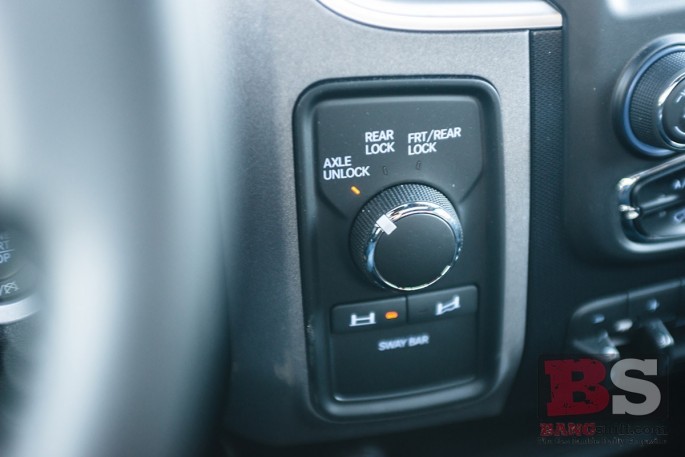 Under the truck is a very strong ladder style frame as you would expect. What you may not expect is a series of steel bars mounted at various points to protect the driveline from ground obstacles, rocks, stumps, and other stuff that would love to do it harm. This is a far more robust system than most of the lame poseur off road packages offered by other OEMs that have “skid plates” the thickness of napkins. 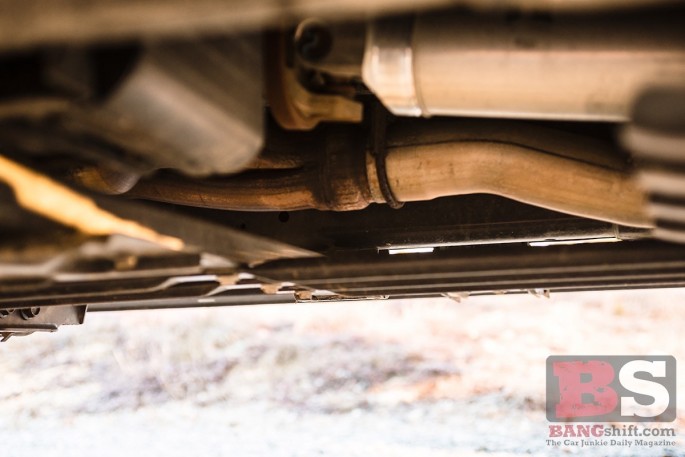 The truck rides on 33-inch Goodyear Dura-Trac tires which are about as aggressive as anything an OEM has ever shipped a truck on. They worked great for us in situations that ranged from snow to muck and mire. The truck could EASILY swallow 35s into is massive wheel wells and while you may get some rub at extreme articulation, few people will be pushing the truck hard enough to see that and it would look killer! Just saying. 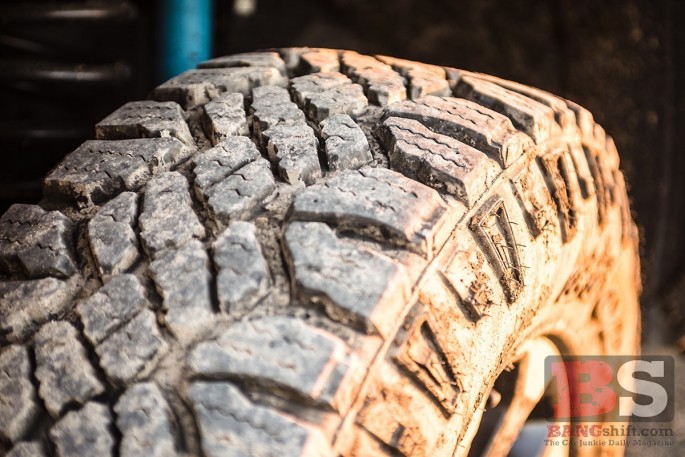 So we have given you the mechanical tour of the truck, what about the styling and looks? We love the “Macho” style graphics that run up and down the front of the bed and while our muddy photos do not capture it, those are painted on with a fair amount of metal flake in them. When the truck is clean they glimmer pretty strongly in the sunlight.

The leather and upgraded interior functions were nice and while they did not make the truck any better or worse off road, they sure were nice for the street and highway miles we put on the truck. 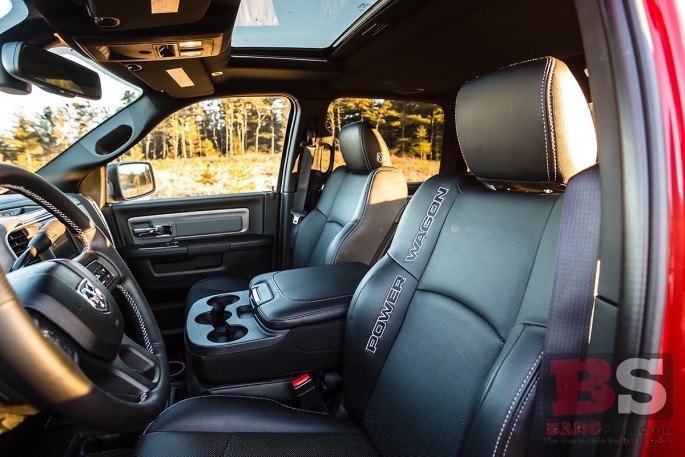 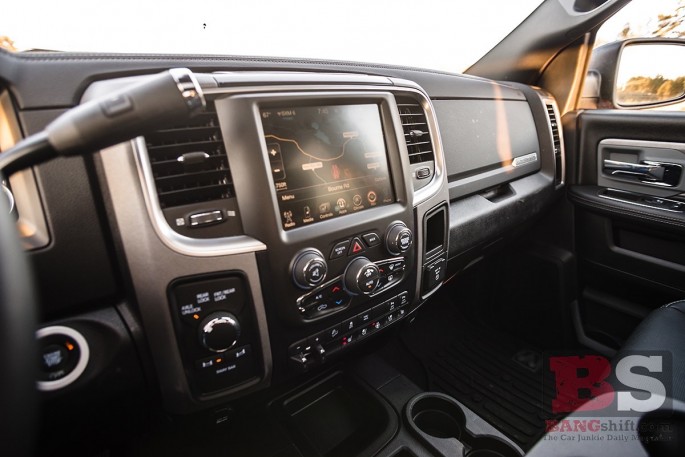 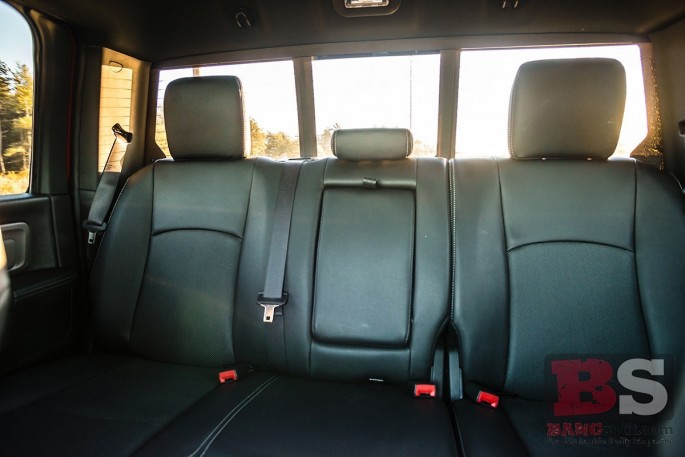 The Ram cab is huge and when we went wheelin’ there were five of us piled in there and we all had room to breathe and places to hold onto when the going got fun.

The Ram Rebel style nose is distinctive and tough looking which fits the character of the rest of the truck as well. If they had stuck the “normal” grill in the Power Wagon it would lose some panache if not any actual capability. The presence of the cab clearance lights is cool and a total throwback to old school trucks. You do not see them nearly as much as you used to.

The Ram Box option was handy. While the width of the inside of the bed gets choked down some with these (you can still fit plywood into it), the handy storage for tools and whatever else you’d want to put in there is awesome. 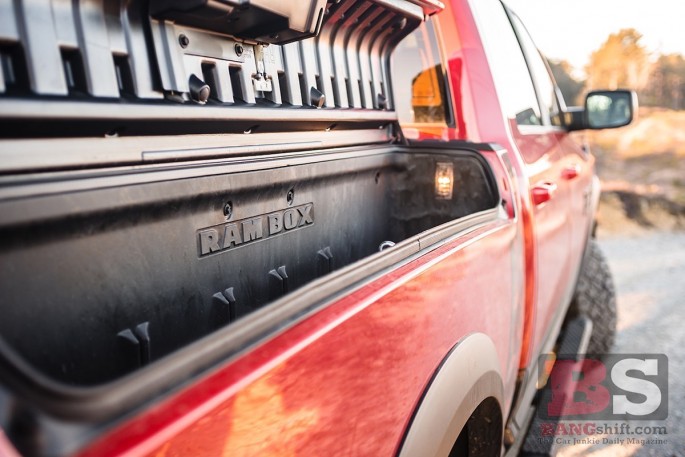 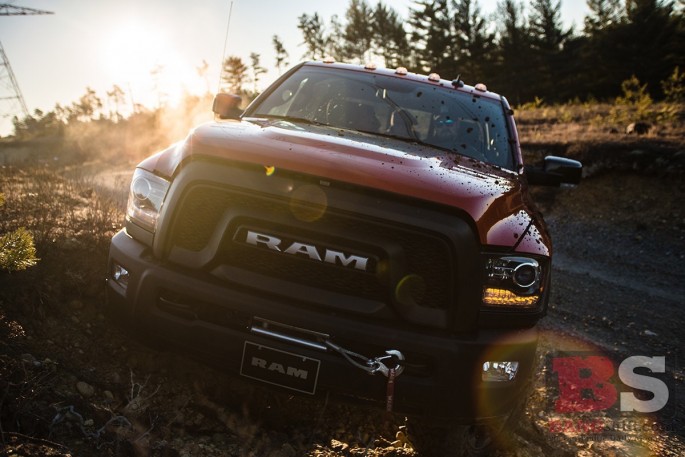 As you can imagine, we had a ball with this thing and we did not take it easily on the truck. Not that we were wantonly trying to do something stupid because we weren’t but when you get a little taste of this truck you want a whole lot more. From climbing hills and slogging mud to running gravel roads, slinging sand into the next county, and squeezing down tight trails there was little that the Power Wagon showed us int he form of weakness or lack of capability. We have had several trucks in our testing spot and most of them spit the bit in places where the Ram wasn’t even sweating yet. 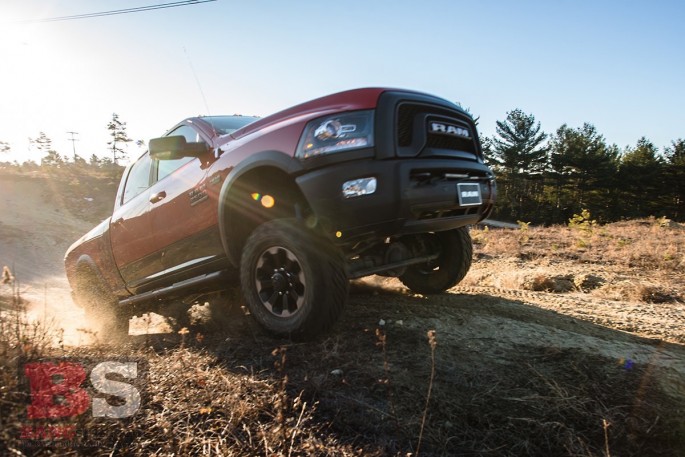 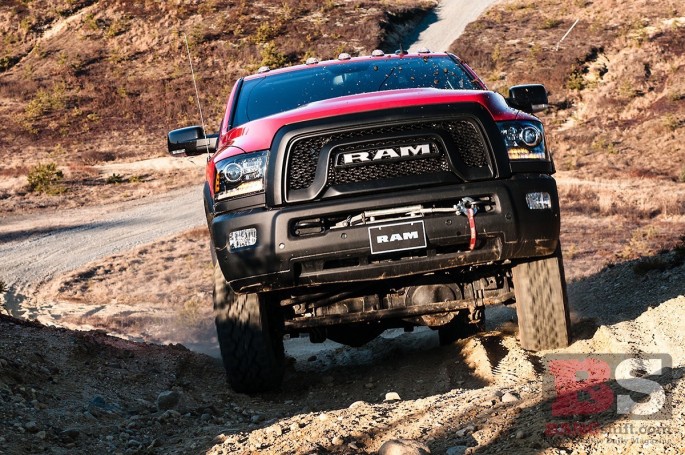 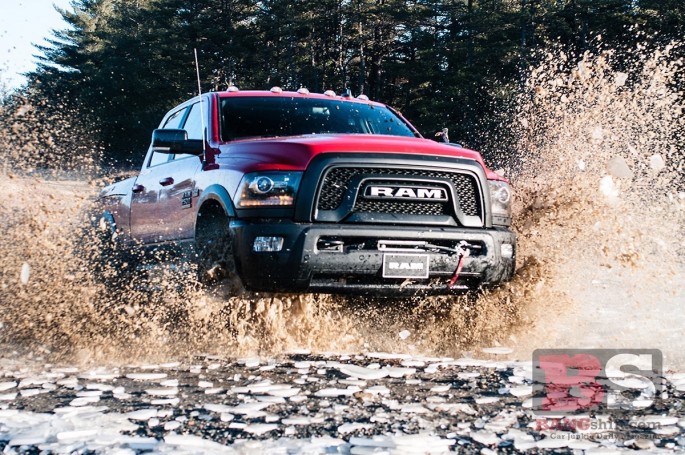 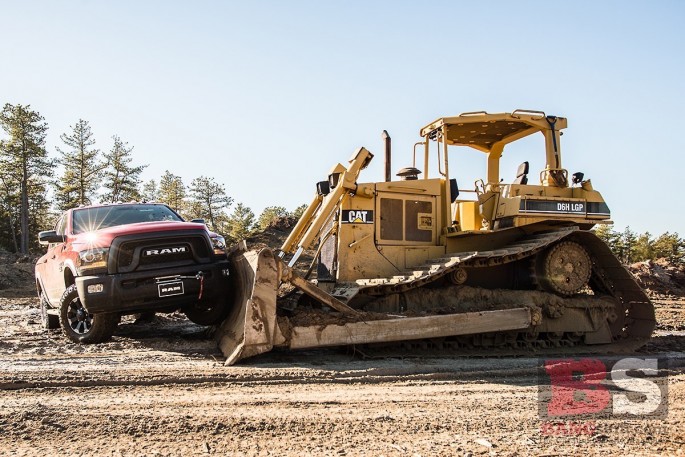 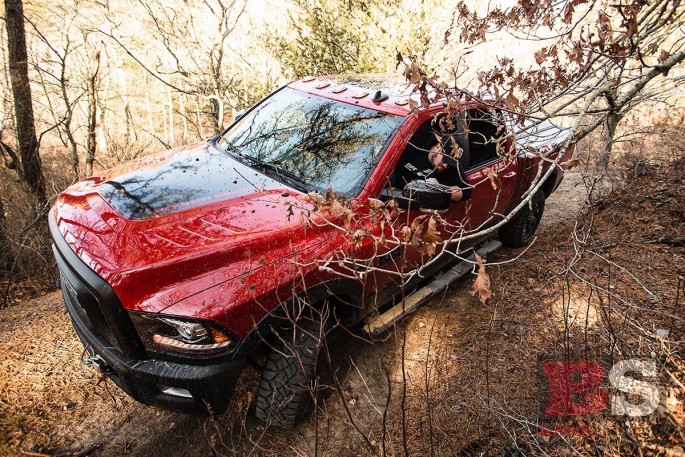 The photo above illustrates the biggest negative for the Power Wagon as a trail truck. It is just too damned big. It is the thing we love the most about it (the size) but it is also the thing that had us biting our nails, narrowly avoiding trees, and doing our damnest to prevent scratches and dings from trailside branches, stumps, and other obstacles along the way. Bringing the Power Wagon out with your Jeep friends will be fun because you’ll be able to handle what they handle but you’ll probably end up with some body scars as a reminder of your day.

The fuel economy is non-existent. Even in normal driving you’ll struggle to see 15mpg in this thing. It is just physics. Big truck, big engine, 7,044 curb weight, and the 4.10 gears mean that the engine is always in the power when you want it but it also means that the thing is turning at a good clip whether you are on the highway or cruising around town.

The last critical thought we’d share is that you cannot get one of these in a standard cab version. We’re guessing that too few prospective buyers would click that box but with a little less wheelbase and a little more turning radius the truck would be more manageable in a trail situation. The huge cab is comfy and has room for the family but losing some weight and some overall size would benefit the economy of the truck as well as the aforementioned trail fitment. 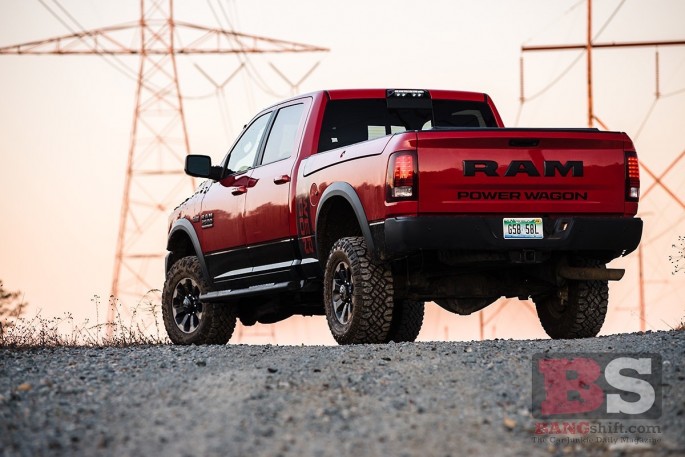 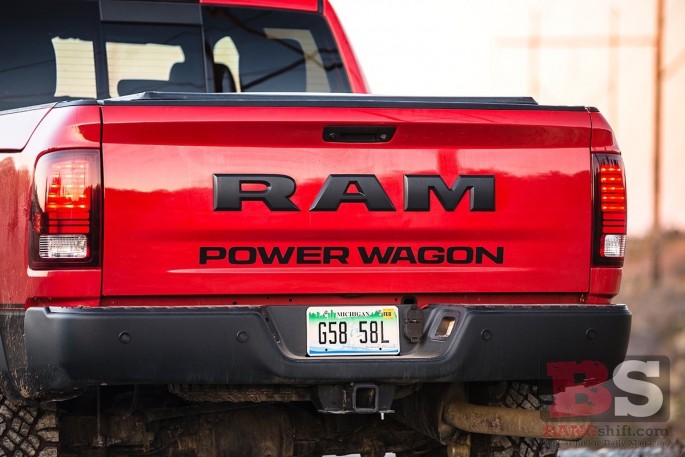 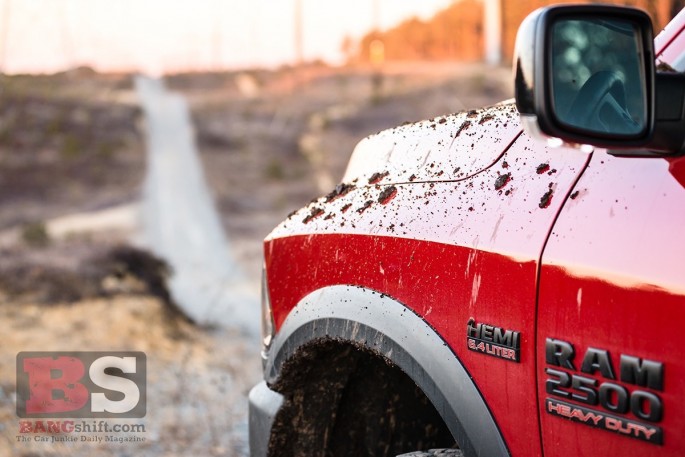 This is the best pickup truck we have ever tested here at BangShift. Why? Because it is the most honest. It has the most significant mechanical upgrades from the factory, and it is truly like the guy who can back up his boasting. It is not a tape and sticker package, it is not something that is designed to make the owner “feel” like they have a capable truck, it is a truly capable rig. Far more capable than the vast majority of owners will ever know.

We also feel that the price is very solid due to the reasons mentioned above. There was legitimate engineering investment made in the development of this truck and it shows. Ram may not be shoving the Power Wagon down your throat with a series of flashy TV ads but like the recent campaign for the upcoming Challenger Demon, “if you know, you know”…and now you know.

BangShift Shopping Recommendation – If you are in the market for a four wheel drive that can do everything you want off road, take you to work each day and mileage is not a concern, shopping a Power Wagon is mandatory.

Dodge Announces Durango SRT - 475hp SUV That We've Been Expecting For A While And He Stuck The Landing: This High-Flying Chevrolet Lumina Just Might Be The Coolest One Out There!