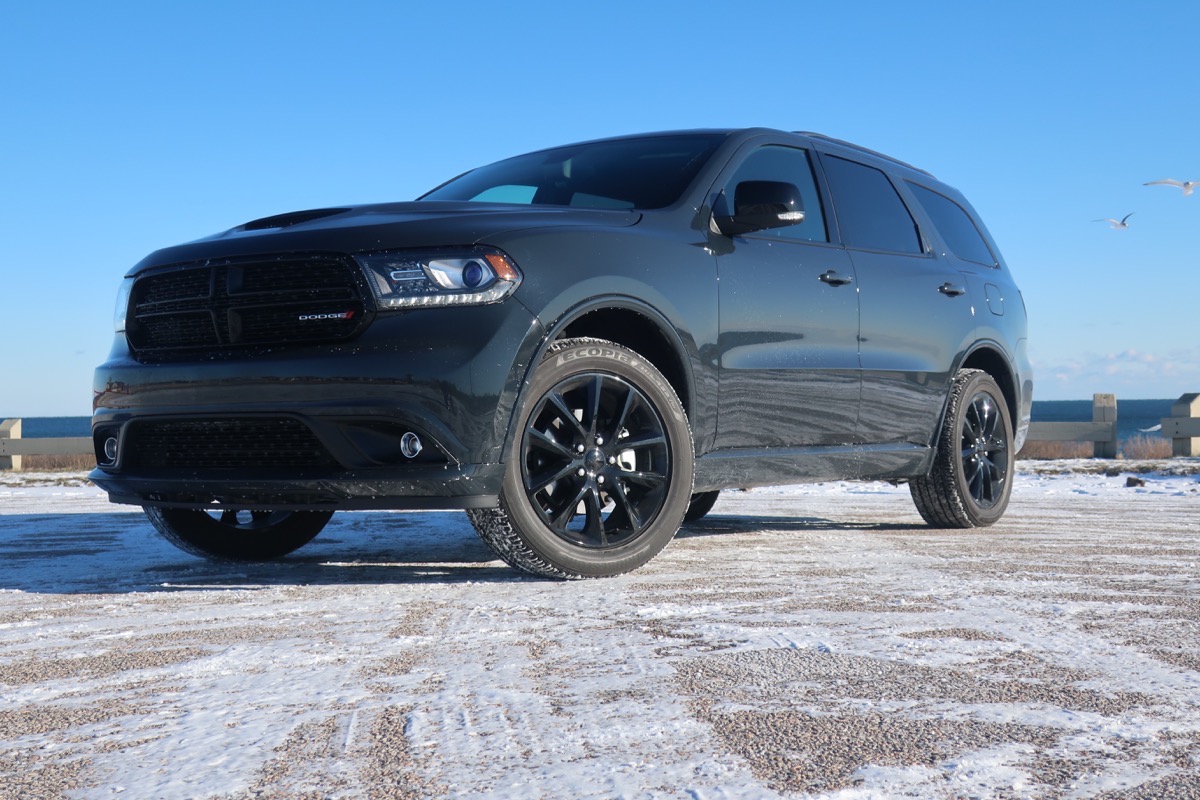 As New England is in the middle of a historic and brutally cold stretch like much of the nation is, we were happy when Dodge threw us the keys to one of their more robust offerings over the holidays for us to put some miles on.  It took my sons Tom and Jack about 15 seconds to rename the 2018 Dodge Durango GT Blacktop AWD the Burrrango because of just how gnarly cold it has been and was over the two week stretch that we had the SUV. Now, earlier this week Bryan McTaggart posted a quick drive piece about his experience with the 2018 Dodge Durango SRT which is powered by a Hemi that makes well north of 400hp. Targeted at those performance minded buyers who want to mix business with pleasure so to speak, it’s a family hot rod.

The Durango GT Blacktop that I experienced was far more a family truckster and I am not saying that in a negative sense. This particular Durango was powered by the 24-valve 3.6L V6 that is rated at 295hp and it is bolted to the company’s fantastic eight speed automatic transmission. I received the Durango with about 900 miles on the odometer and by the time we gave it back we had added about 400 to that total. If you are wondering about mileage, that came in at 17.2 mpg as per the dashboard readout. It should be noted that the around town milage before a couple of longer highway rides that closed out our experience was 14.5. Not bad but not great, either. Physics still cannot be overcome. No matter how many overdrives you have, it is still a large, heavy box to push down the road, up hills, and through the wind. For those of you playing at home, the color name on this rig is Bruiser Grey.

The price as tested for this particular Durango was $49,060 with about $9,000 of that coming as a result of optional equipment that we’ll talk about in a minute. The Durango is built on the same assembly line as the Jeep Grand Cherokee so it shares virtually all mechanical elements with the Jeep. The chassis, the drivetrain, and much of the interior is shared between the two. Pricing is also similar as well. The GT model Durango was formerly called the “Limited” model, there is still a Grand Cherokee at that trim level. One thing that separates the two is the third row seating. As of this moment, no Jeep is offered with third row seats, so if that is a must, you are going to be looking at the Dodge or other marketplace competitors.

The Blacktop package with its gloss grill, 20″ wheels, and black mirrors added $695 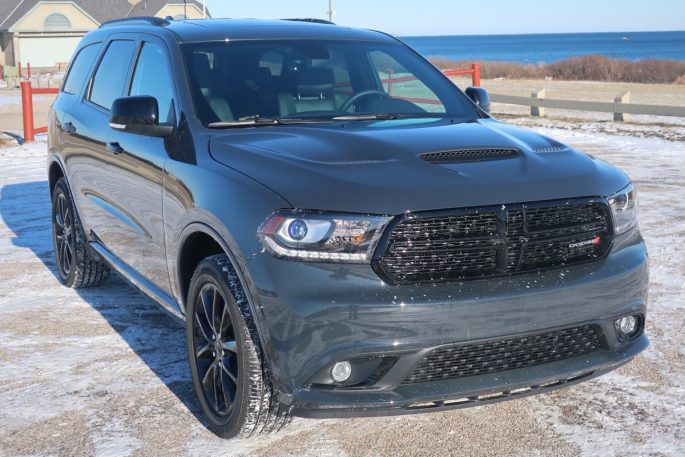 As someone who is a fan of the Jeep Grand Cherokee overall it isn’t too surprising that I liked the Durango. I wasn’t crazy about the all wheel drive all the time situation this thing had going on as I think selectable four wheel drive in a vehicle like this make more sense for fuel economy, tire and driveline wear, and the reality is that in the VAST majority of driving scenarios you don’t really need it. As this is a part of the county that gets hammered every winter it is nice to have AWD but for the rest of the year? Please give me selectable four wheel drive.

The 3.6L V6 makes right about 300hp and it does not have the nice thumping bass note of the V8 engine. That being said, my oldest son Tom liked the sound of the V6 screaming out of the dual exhaust when we’d perform some very scientific acceleration tests with the truck. That kid is a hard critic and it was an unsolicited opinion when he blurted, “I don’t know…I kind of like the way it sounds,” after one particular romp of the throttle. Power is totally fine and not lacking in obvious ways.

Is more better? This is BangShift, of course more is better. Is the eight speed transmission largely the reason that the engine succeeds? I think so. Because of its seemingly peaky personality when it comes to torque, the plethora of gears keeps things calm and happy. The Durango has nice linear acceleration whereas with a four sped automatic I can see this thing not being nearly as well rounded on the road. 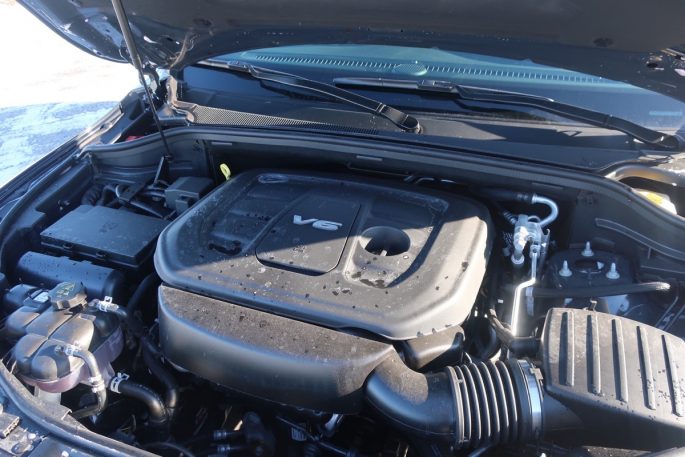 Boy there’s a lot of room left in there! 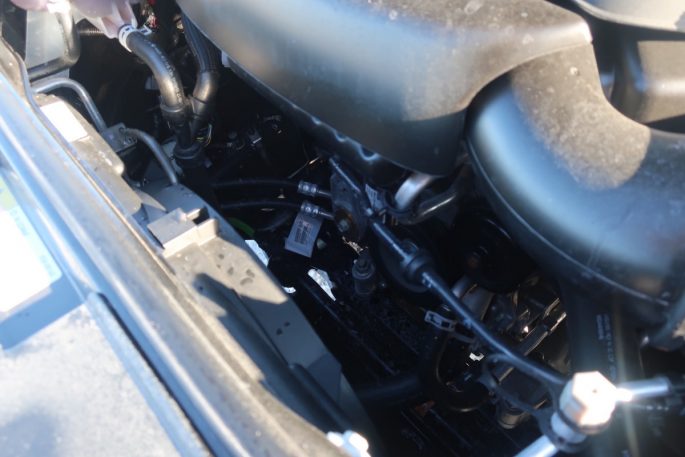 Perhaps the most interesting option on the sheet with regard to this vehicle was the hood. We had a bunch of people get giddy when they saw this thing because they saw the performance hood ($995) and immediately believed it to be the SRT version of the Durango. I think it is cool that you can option this particular hood onto a V6 model but at the same time, how many people are going to throw down a grand on a hood for a vehicle that is surely just daily transportation and not some sort of racer fantasy? I get the hood on the SRT model and trust me I liked the looked of it on this one but it was kind of interesting that Dodge optioned this truck this way. It certainly looks more aggressive in photos and perhaps that was a reason for its addition but I’m saying that if you are a collector of Durangos, get yourself a V6 GT with the performance hood and squirrel that baby away. It’ll be the rare option package everyone at the auctions will be looking for in 35 years. 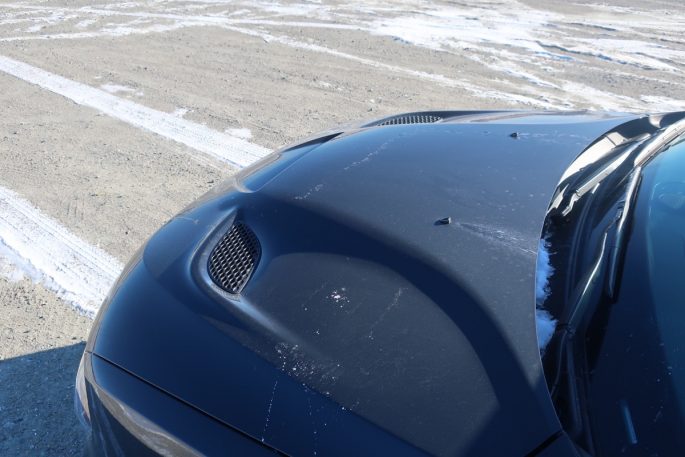 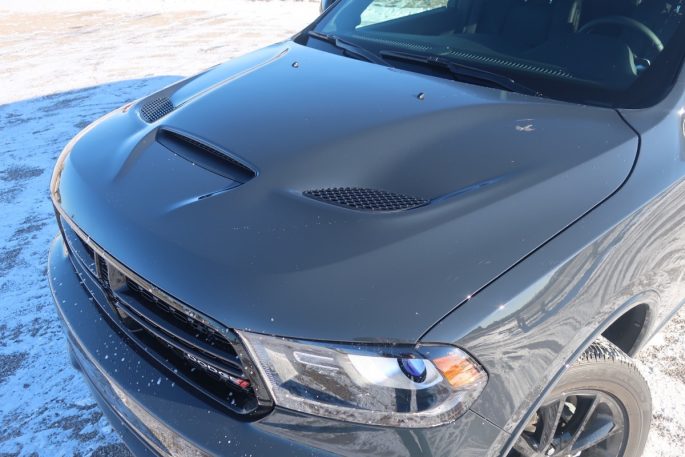 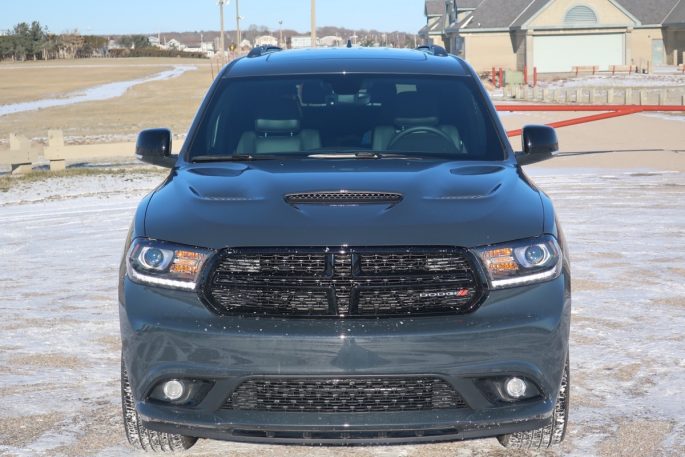 On the road the Durango is quiet and comfortable. There’s plenty of room for the kids, your stuff and virtually every nicknack in your house with storage pockets and nooks everywhere. While the kids did not use the rear DVD entertainment system, we have used the same system in Jeeps before and it is simple and we’ve never experienced issues with its operation. The seats and interior in the Durango are pretty swell. They are not Recaro race seats or anything but they are designed to keep your comfortable as you eat up the miles, not hold your organs in place as you take on Big Bend at Lime Rock. A lucky break for us, the Durango had heated front AND rear seats as well as remote start which we used all of, every day. The kids were living large in the back seat with the bun warmers on.

The Chrysler/FCA touch-screen infotainment system continues to be one of the best in the industry, a point of view I have maintained since this generation of controls came out. It sounds weird to say but not all of them are out there. Some interior color would have benefited the Durango. This one had the full black hole effect going on where the only color present from the dashboard to the inside of the rear hatch was black.

Handling is what you would expect out of a modern SUV. The Durango is sure footed and through ice and snow and slush and junk it was totally well behaved. I can’t speak for how one with 150 more horsepower would be in the same scenario but the V6 did not have this rig wanting to do anything but plow through whatever mother nature threw at us. The ride is good as the Durango is on coil springs on the corners and if you have ridden in a Jeep Grand Cherokee made over the course of the last couple years you know exactly how the Durango rides. The four corner independent suspension shines when it comes to crummy winter roads filled with chuckholes and stuff. No jarring impacts even when we caught a few crates in our travels.

The color and the Blacktop package were nice additions to the base Durango. The Bruiser Gray looked great when we washed all the salt off and the blacked out badges as well as the optional wheels kept the truck from looking staid. The gloss black grill is also part of that package. Not over the top but enough to know you were not in the base model, which is always a good thing to us. The stereo was good and loud with some Christmas and then New Year’s tunes blasting out of it as the Lohnes clan headed down the highway. 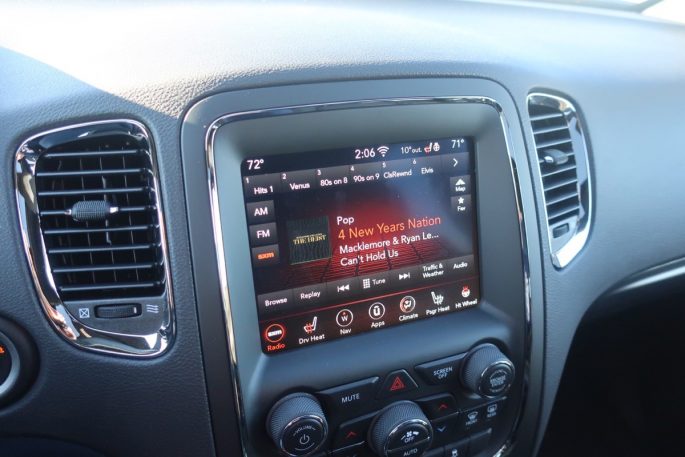 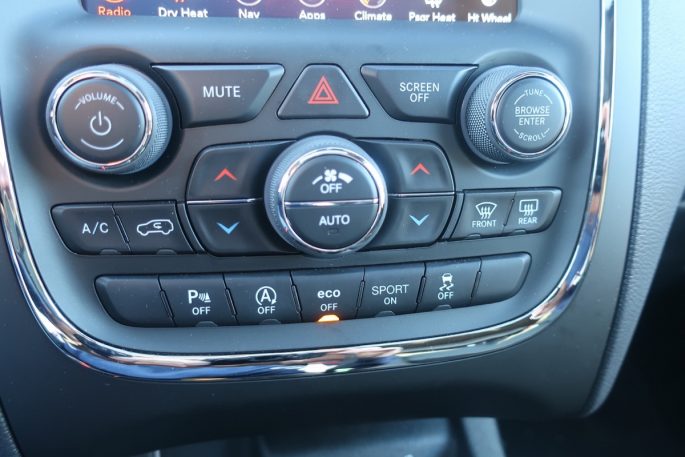 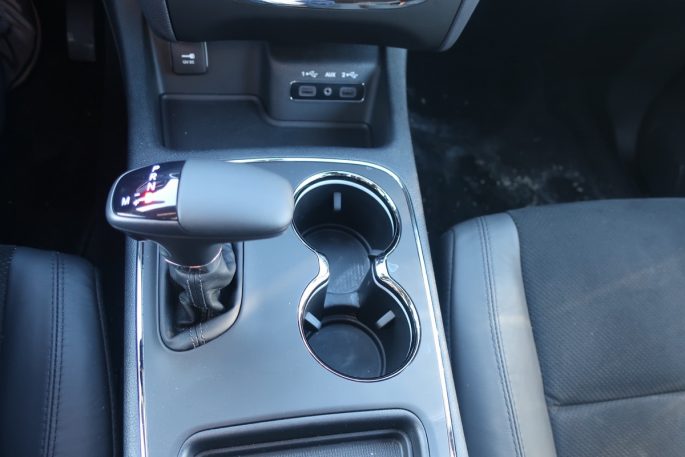 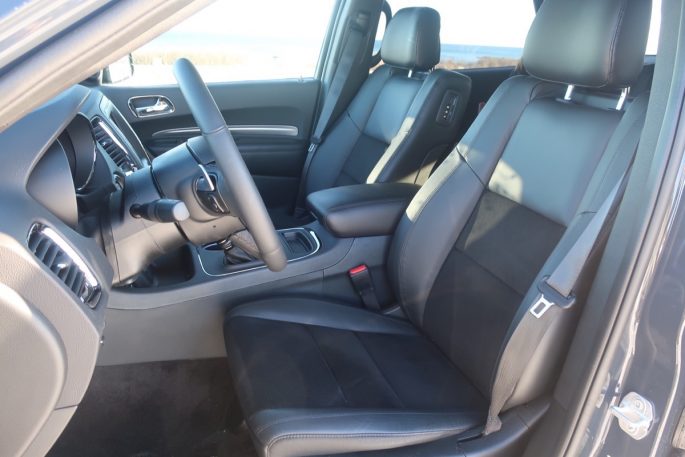 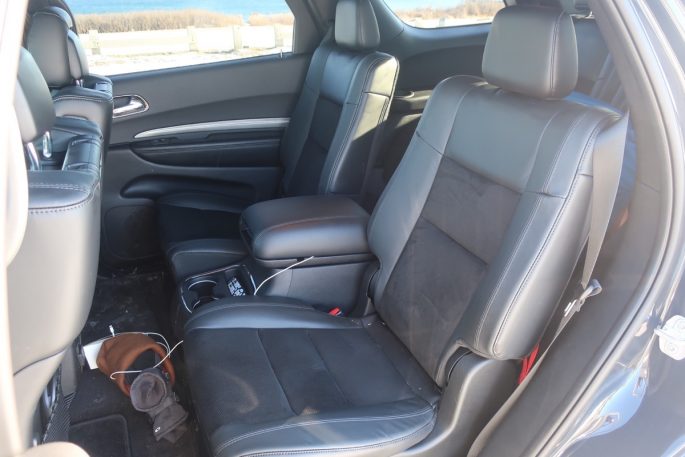 So what’s the final say? With a little less flamboyance on the option list than this Durango had you could be rolling down the road in a really nice, well appointed, quiet, and moderately efficient family hauler for what I’d consider smart money. As mentioned earlier, if you are more of a Jeep person based on styling, the Grand Cherokee is going to do exactly what this Durango does with some different exterior cues and with one major exception. You cannot get third row seating in the Jeep Grand Cherokee. If that is a must and you like this platform, Dodge is your only option.

As this Durango sits I would be able to cleave about $5,000 in options right off the top. Combining that with some good old fashioned negotiating skills at the dealer and this starts to look like a strong value if you were in the market for a “truck-ish” SUV.

The whole family was pleased with the experience and the miles we shared in the 2018 Durango GT Blacktop AWD and it seems the next logical thing to mess around with would be a Trackhawk, right? Oh, don’t worry. We’ve got that handled. Stay tuned! 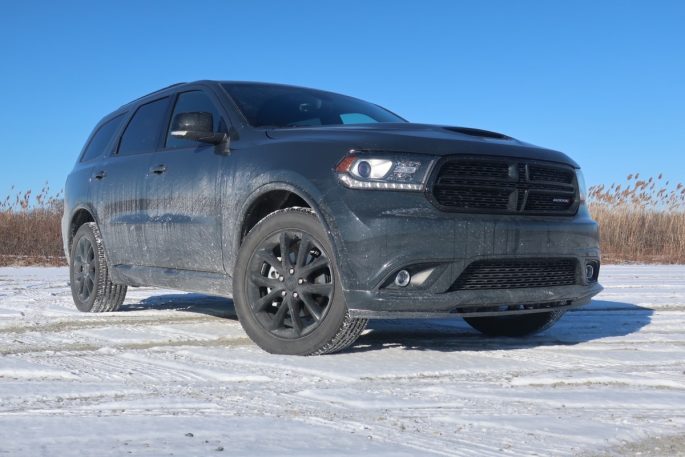 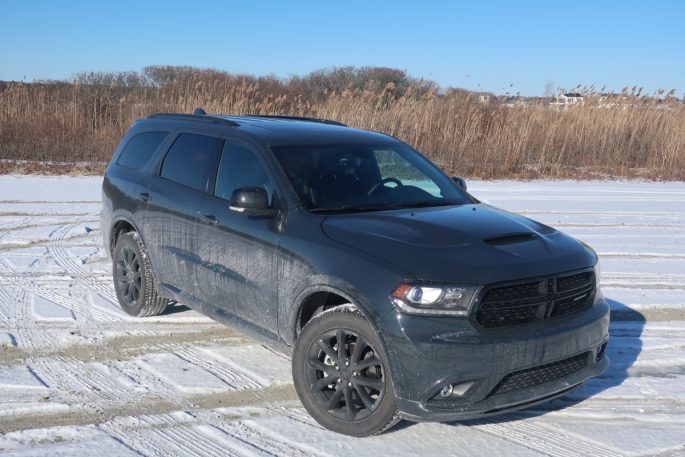 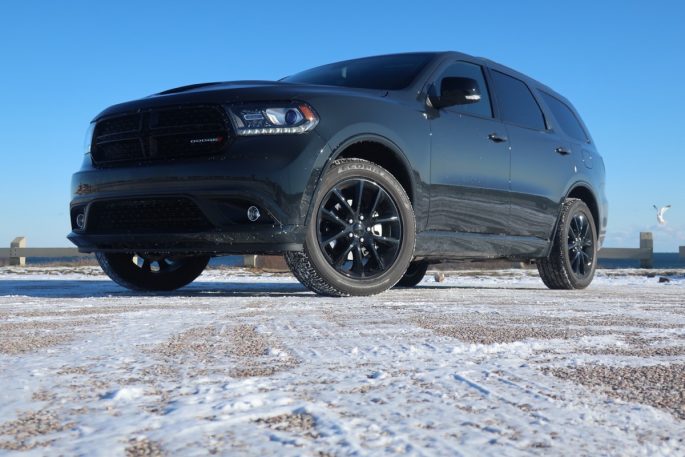 NHRA Museum Hosts AA/Fuel Altered Legends During 58th Winternationals! Question Of The Day: When Did You Want To Hang The Engineer Of Your Car?