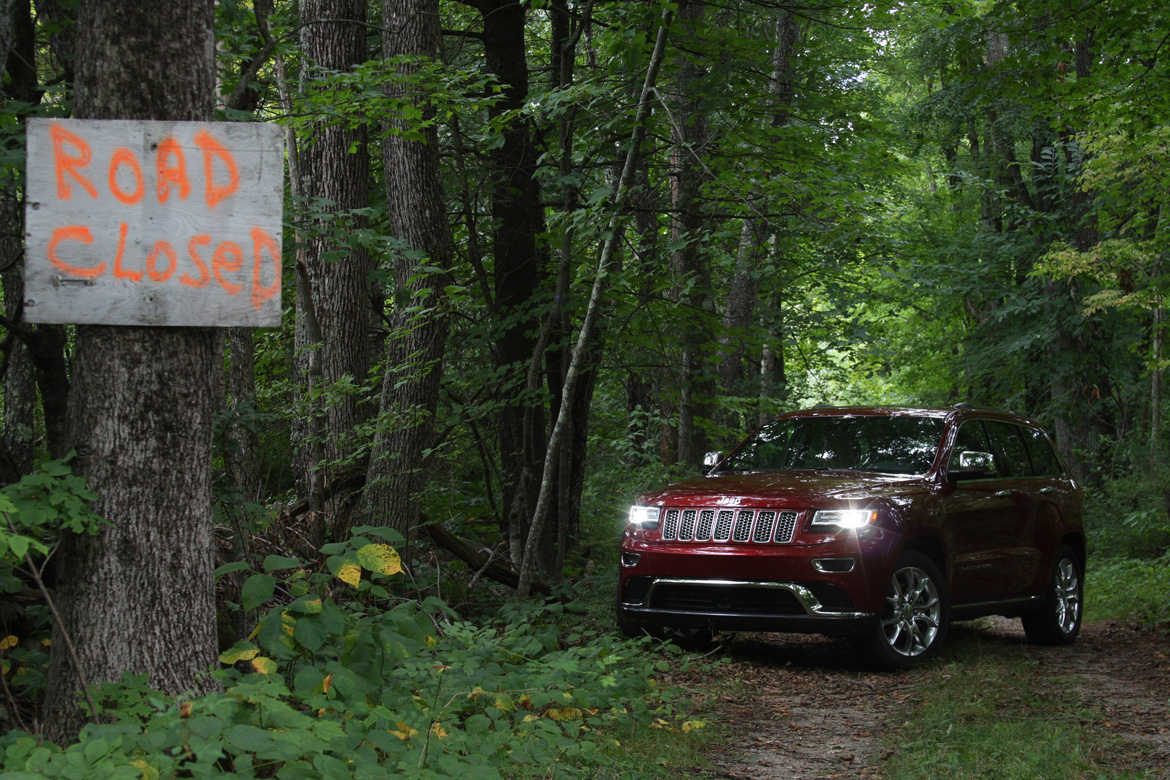 This was my second go around with a Jeep Grand Cherokee Summit Eco-Diesel in 2014. Earlier in the year Criag Fitzgerald, Dave Nutting, and I had taken one on a 2,000 mile weekend road trip that saw us get insane mileage in great comfort throughout the trip. While it was great to see the machine in those conditions, I really wanted to nab one for myself and spend some quality time in it doing the stuff that SUVs are supposed to do. Stuff like off roading, road tripping, and carrying a family around on its adventures. The Grand Cherokee is one of the last SUVs that actually holds to the tradition of ruggedness and the ethos of the original sport utility vehicles in the sense that it is still sold and known as a truck that can get you in and (most times) out of the situations you place it in. No one thinks of a Tahoe or a Suburban in the same light as a Grand Cherokee. Different animals but all classed under the same umbrella. 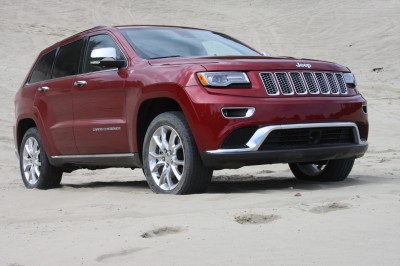 Get outta my way!

To go from the outside in, I am a big fan of the styling of the current generation Jeep Grand Cherokee. I think the lines are taught and that there’s no real “flab” hanging off the vehicle in any direction that you look at it. When you dump the air suspension all the way down into “entry” mode it looks like a street Jeep for sure, but when you crank ‘er all the way up while off roading the thing is as high riding and has as much ground clearance as you would need for most, ok, almost all situations. As you will see, we took the truck off roading and never had an issue with ground clearance. The wheels are great and the tires were very good, especially in the silt that we encountered at the secret BS off road testing grounds where we shot our photos.

The interior of the truck is great, if a little on the “black hole” side for our tastes. There are optional colors that one can click off when ordering and we’d have gone with a lighter tone in there. Not that there is anything wrong with black but when the whole interior is essentially black, it all kind of melds together. Jeep has a great interface to use with navigation, satellite radio, etc and it is certainly one of the better ones we have used in 2014 MY cars and trucks. The seats were nicely bolstered to provide support while off roading and even during cornering situations on the highway. This is not a vehicle that you’ll win an autocross with but it does drive great and we’ll get into that more below.

While all of that stuff is really nice, the real story here is how the rig works and what it is like dynamically to drive. In short, I am in love with this one and it was honestly the first car or truck we have driven all year that I told my wife I would buy that day given the money to make the purchase. The range with the diesel is incredible, the performance is not drag strip winning but it is fine for an SUV and at no point did I worry about being down on power or needed to pre-plan things I normally do with the accelerator pedal. We took the truck off-roading as a family one day and the next we embarked on a day-long road trip through rural central Massachusetts in the finest traditions of exploring. We stopped and munched at a couple cool restaurants, visited our old college, and cruised back home….leaving 350 miles of fuel left in the tank AFTER both days of combined fun. 30+ mpg in a vehicle wth the size and comfort of the Grand Cherokee feels like cheating. It feels like you are getting away with something when the gas gauge simply does not move and the range counter also seems to be stuck.

The price of the Jeep, as tested was hovering in the $55,000 range. That’s a bunch of money and while the majority of owners will not be romping in the sand, the woods, and then rolling around the state over the course of the weekend, some will and there’s no better way to do it than in one of these. If I sound like a complete fanboy on this one it is only because I am. This is one of the best vehicles for sale in America today, end of story.

WE’RE GOING TO TELL YOU THE REST OF THE STORY THROUGH PHOTOS AND CAPTIONS BELOW! 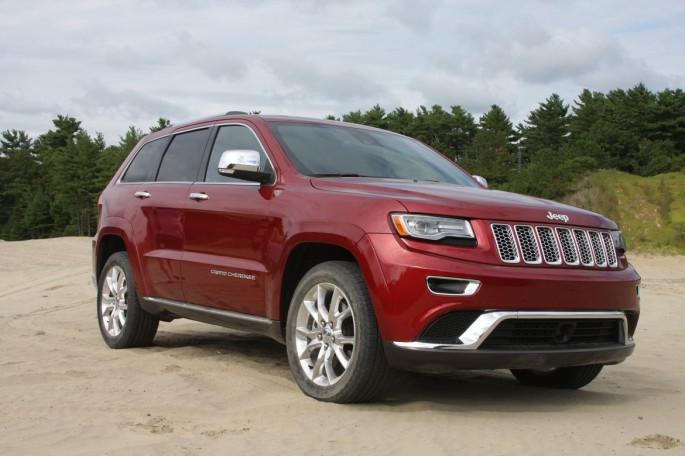 So here’s the Jeep in its natural environment, off road. The location we took the Grand Cherokee was filled with steep hills, sand, and some tight trails. 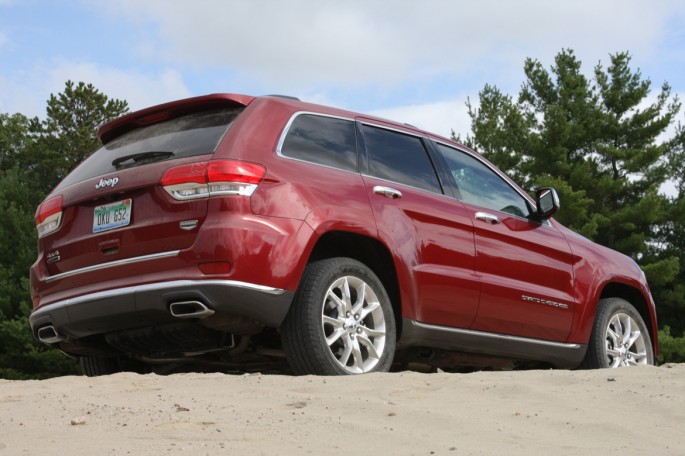 When we got off road, I simply shifted the knob on the dash to sand, and I also adjusted the ride height button to give us maximum lift, just to see how it worked. As you can see by the increased gap above the tire, that mode does raise things considerably. 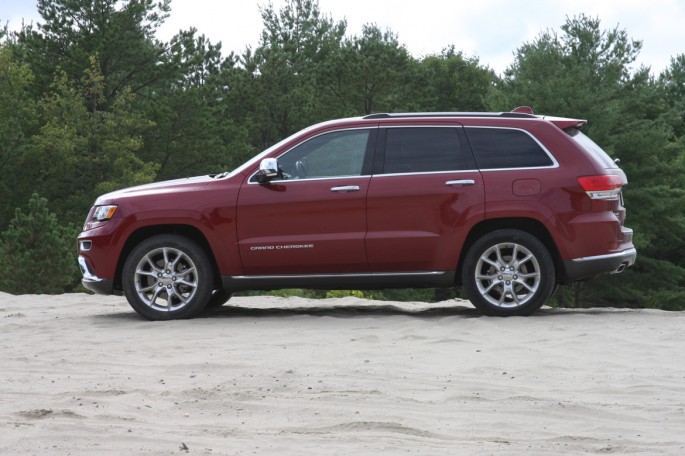 I find this to be a really pleasing profile. The design is great with no wasted space or lame glue on doo-dads. 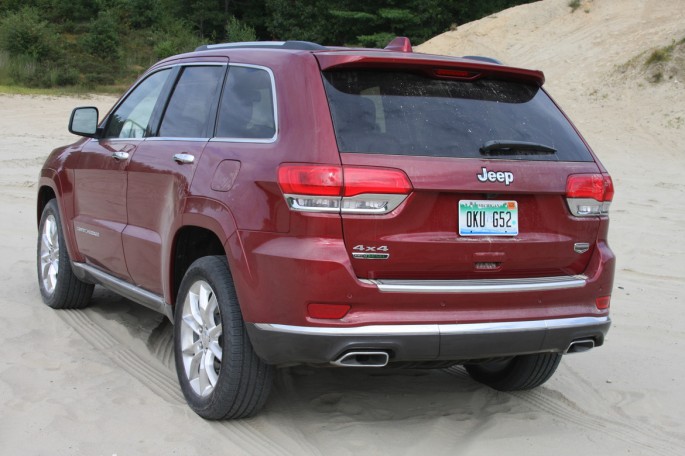 The Goodyears were great in the sand and the eight speed transmission was working nicely to provide lots of wheel speed when we were slinging the stuff around and having fun. 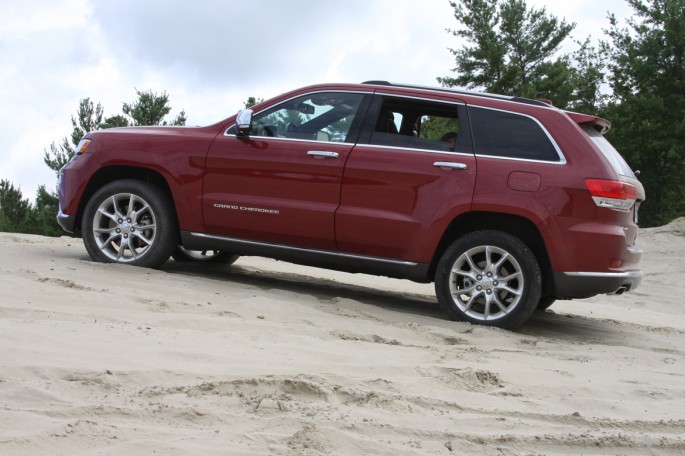 After stopping on this grade, I was interested to see if the Jeep would dig in or claw up and it clawed right up. This really is a capable off-roader. I would not have had the guts to try the same move with the likes of a Tahoe or Ford Explorer. 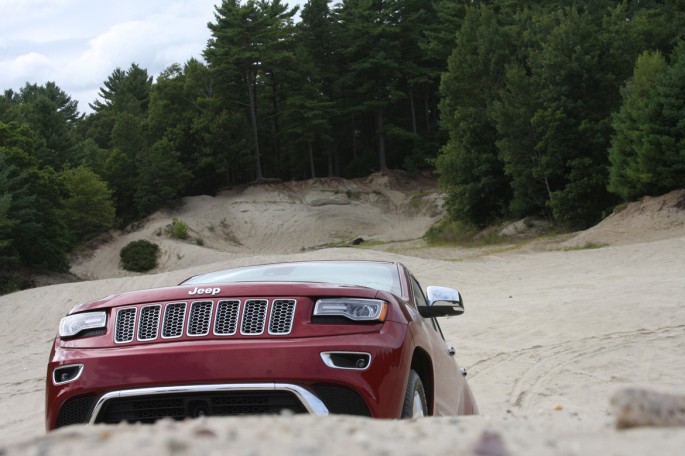 The hill was pretty steep! 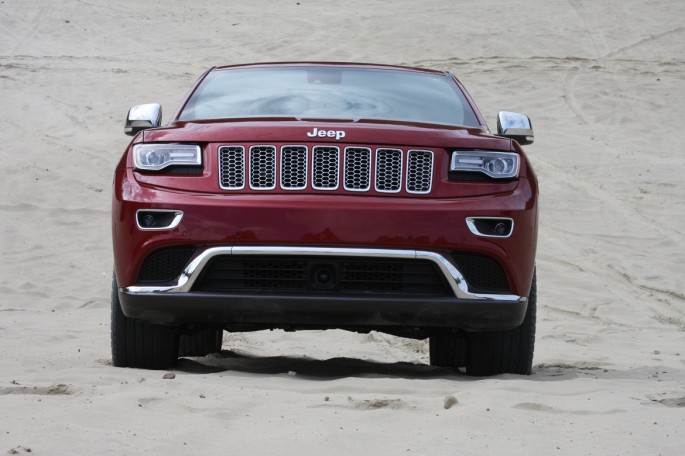 Note the ground clearance under the Grand Cherokee. Nothing hanging down to get caught on stuff or bashed on rocks. The front end is tough looking if you ask us. We were really into the whole look. 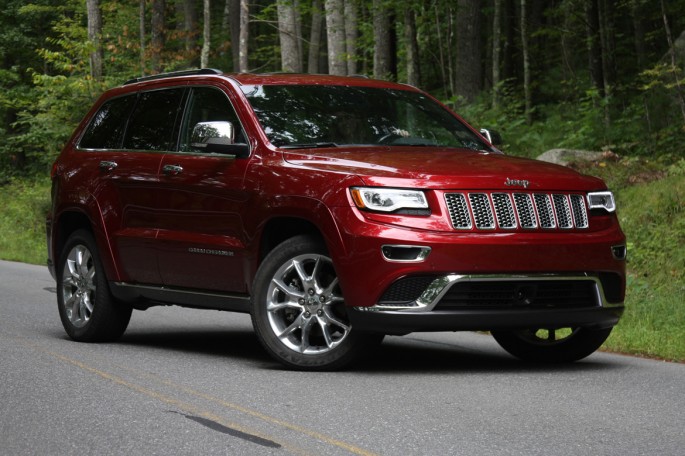 After our day in the sand, we slept on ideas for a day trip and came up with a plan to visit parts of central Massachusetts we had never seen before. There are lots of little hill towns with populations hovering at less an 1,000 so we struck out on back roads. Off the dirt, the Jeep carries itself very well and has a refined appearance that is instantly recognizable. 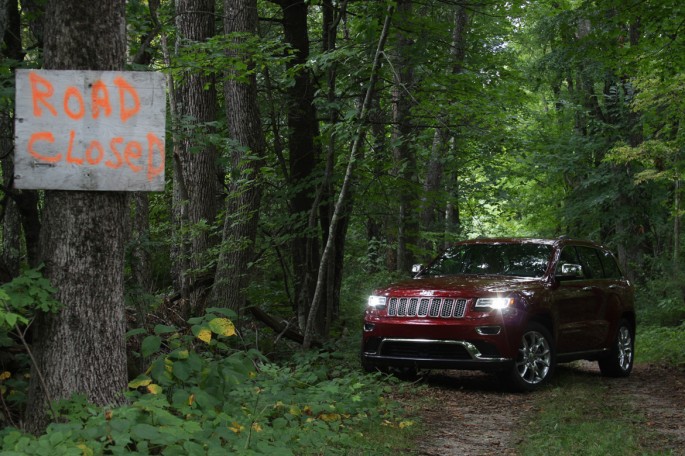 OK, so we found so dirt on this trip too, but that’s the beauty of this thing. It pretty much begs you to seek out things like this and explore them. After about a half mile into the woods on this road, I turned around. It was getting spooky in there. 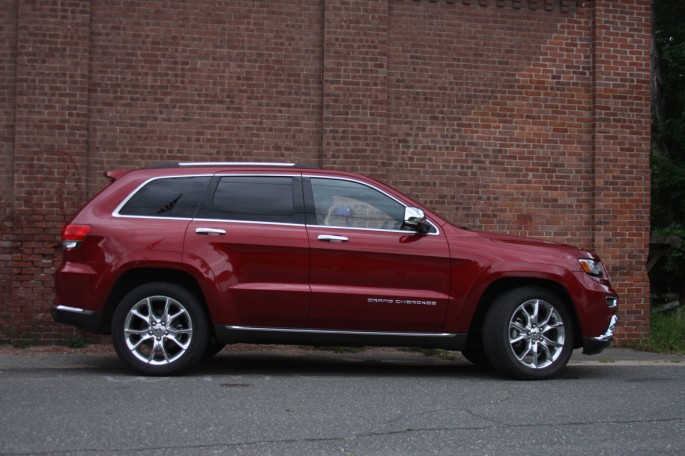 Here you can see the decreased gap between the tire and fender as the truck was in road mode. At increasing speeds it auto-lowers to improve fuel economy. Putting the Jeep into sport driving mode also accomplished this. 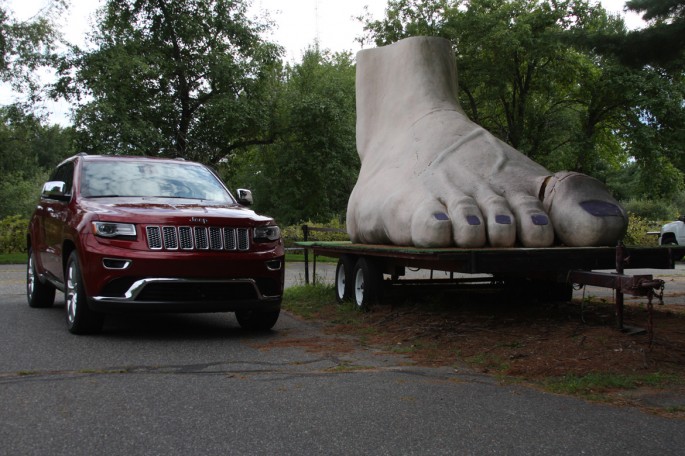 A telling illustration of what 400+ lb/ft of torque feels like when split though eight gears. A fantastic transmission and engine combo that was a joy to dip or toe into going down the road. 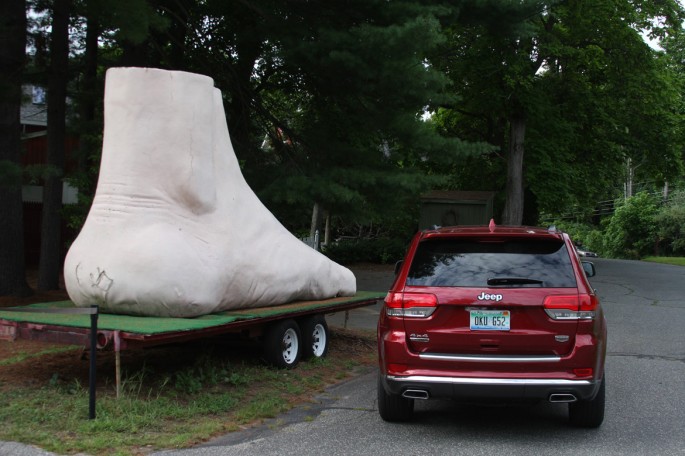 The Jeep’s backside is far better looking and far less creepy than the heel on that huge foot. 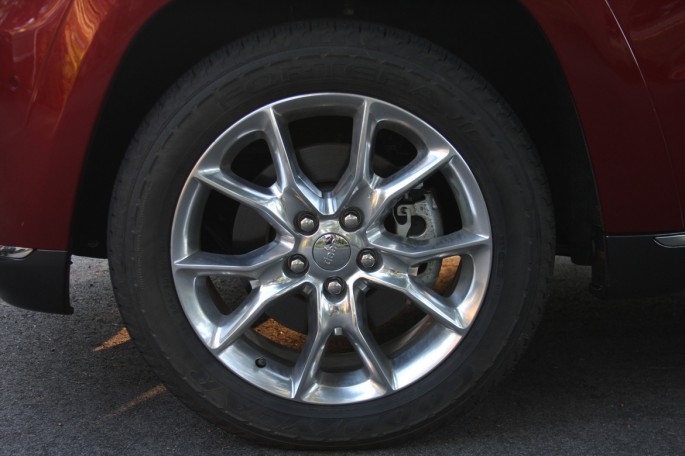 The wheels were nice and certainly added to the refined looks of the Grand Cherokee. A little more diameter would spice up the looks but a shorter sidewall tire would compromise off road performance. 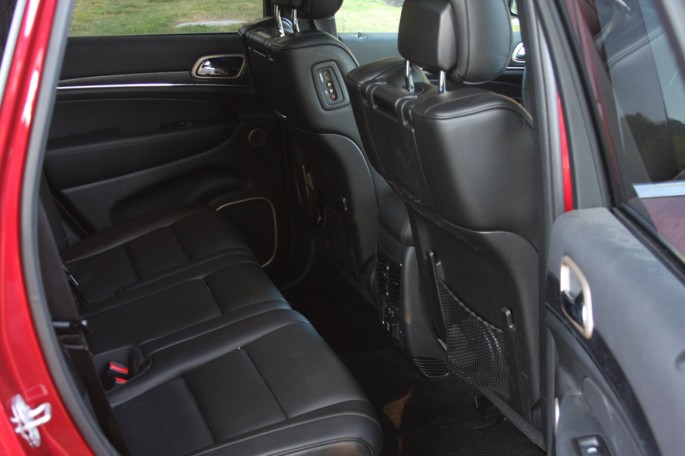 The kids loved the back seat and had plenty of room for their books and whatever else they were reading. The seats had television screens built into them with audio hookups and all. We did not use the screens because we have always felt like keeping the kids engaged in the cool stuff you see out the windows is the better plan on weekends like we had. 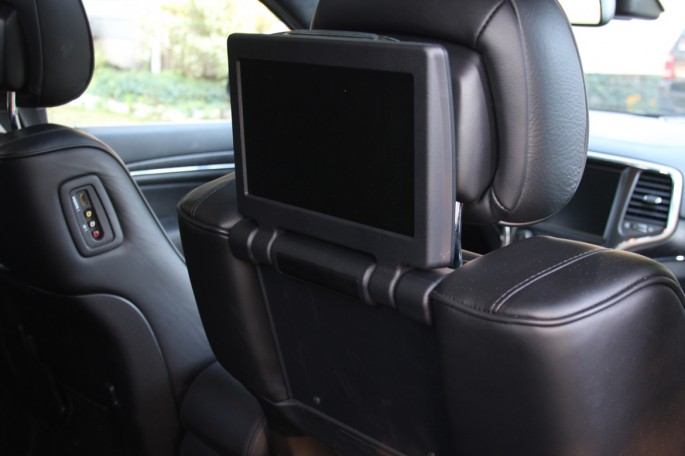 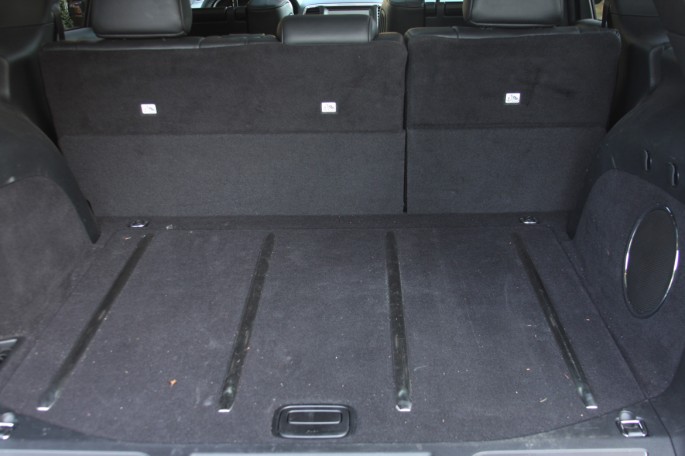 Being an SUV, storage space is important. In this case the area behind the seat is plenty large enough for an airport run with a family luggage load, trips to the home improvement store, grocery shopping, etc. In short, it is very functional. 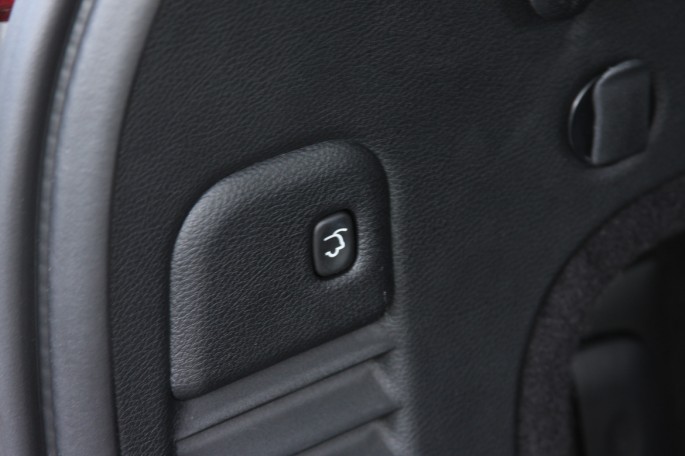 Power closing lift gate is a handy option when you have full hands. 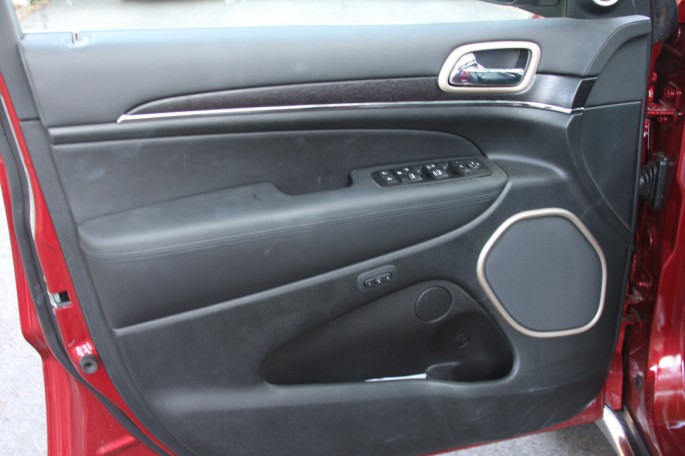 The interior was very nice although not too ground breaking in the design department. Again, functionality and refinement seem to have been the goals here and both were achieved. A little more in the pizzaz department would fit the vehicle’s attitude. 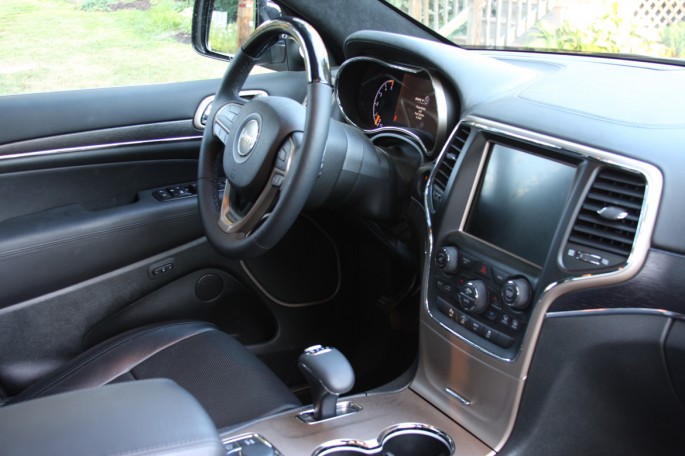 Thick wheel and short T-shifter were nice and handy. Dash layout was good and the center stack was fine. Large touch screen was best we have seen all year. 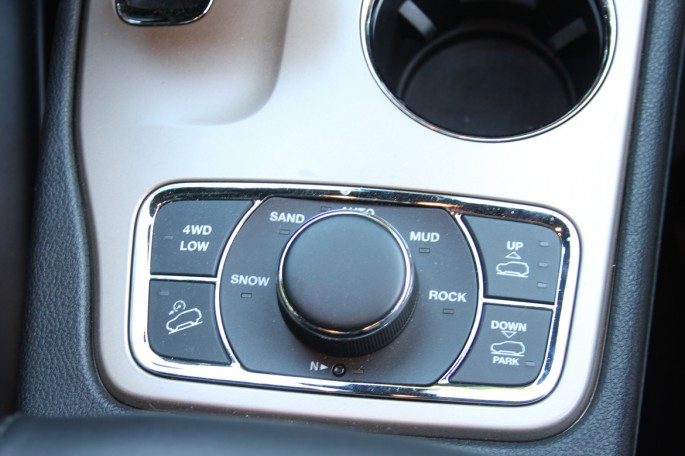 Not a gimmick! The off road modes actually worked differently and we tried them all out in the sand to see if the driving dynamic would change. It did. Neat stuff. 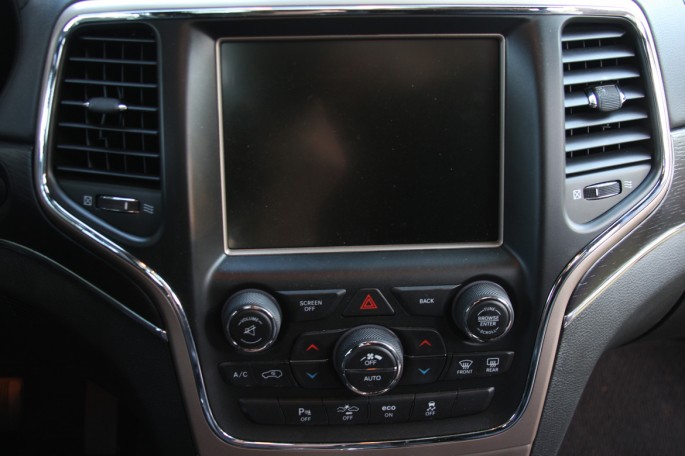 Well done package by Chrysler/Jeep/Fiat here. Large screen, easily to navigate, fun to use. Redundant knobs beneath for those that don’t want to get involved with the touch screen situation. 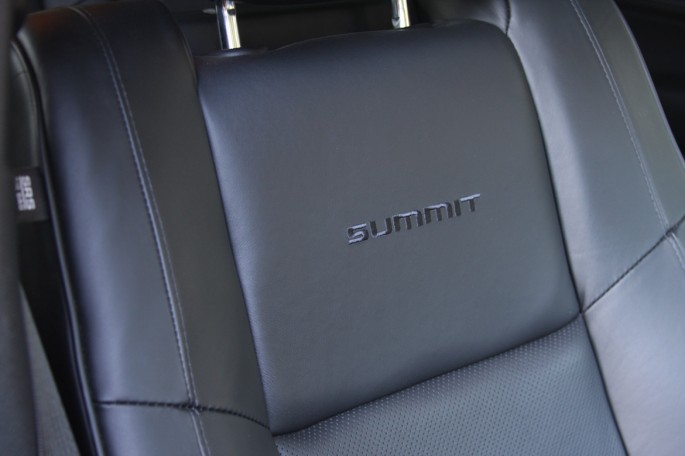 While the Summit edition is the top of the food chain for these Grand Cherokees, the thing does not beat you over the head with that fact. Tasteful embroidery and a badge here or there are all the “tells” you’ll see on this one. 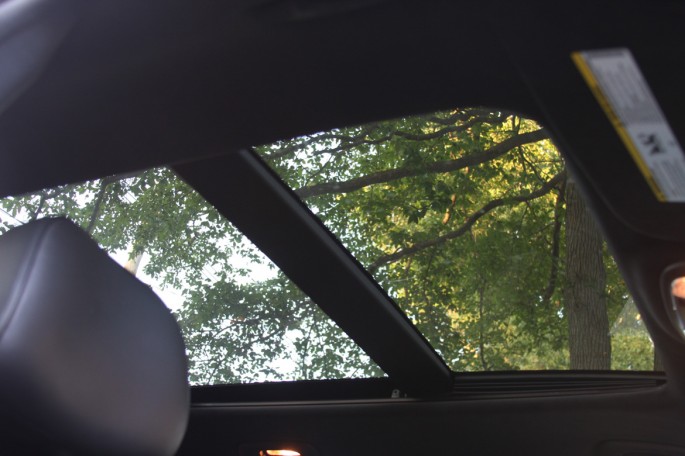 Multi-panel glass roof is boss. Plain and simple, it is a fun way to see the world pass by and the kids loved watching the tree tops zip past while we cruised through the forest and other places. 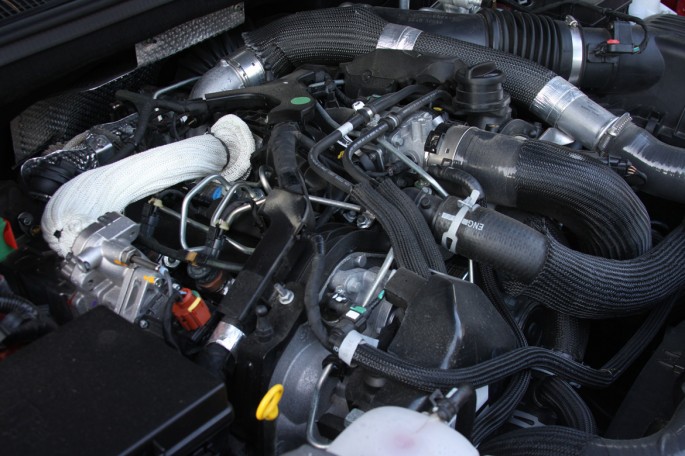 The true star of the show, we love this engine. Incredible economy in a vehicle of this size and weight combined with fun (but not blazing) performance makes this a real winner. 240hp and over 400 lb/ft mean that while not a drag strip blazer, the Eco-Diesel V6 is very responsive and has the grunt to get the job done. Quiet as well. Great piece here. 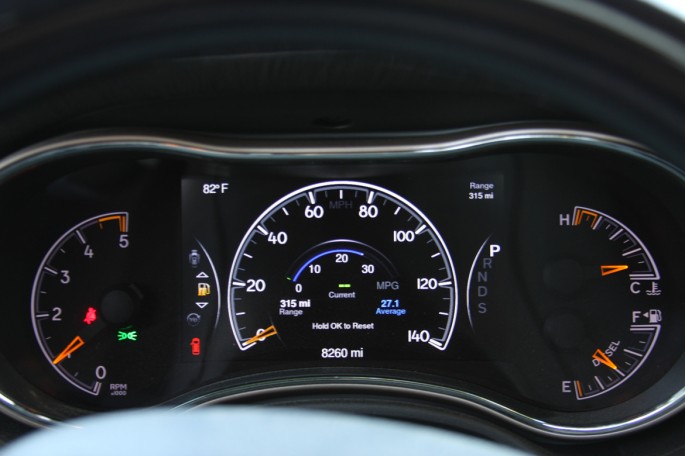 Lastly but not leastly, the gauge cluster can be altered and changed though several modes as you wish but all of them share a clean layout and easy to read instruments. Fun options include a wheel articulation graphic and other choices like monitoring the torque split front and rear, etc.

An Austrian Police Officer Found Out Just How Much The Locals Loved The Speed Trap Aeromotive Introduces The Dual Phantom - That's Right, 2,000hp Fuel Support From Your Stock Tank

13 thoughts on “BangShift Test Drive: The 2014 Jeep Grand Cherokee Summit Eco-Diesel – A Throwback To The Future”