1900 Sheets Of Paper And 100 Tons Of Pressure Deliver More Entertainment Than We Expected! 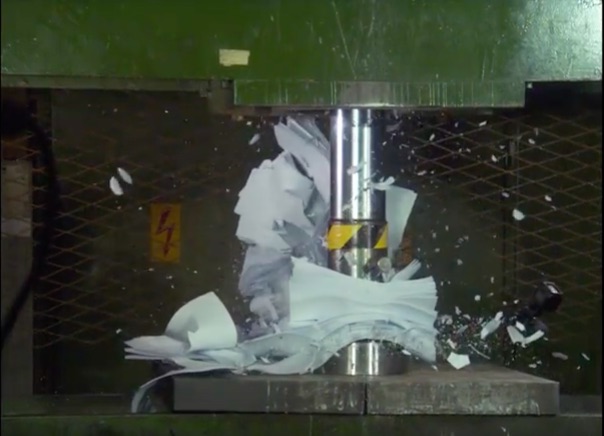 It has been a while since we checked in on the Hydraulic Press YouTube Channel and as we suspected, our pal with the great accent has been up to his old tricks. We skipped the videos about crushing emojis, running chainsaws, and non-Newtonian fluid and went straight to this feature film while shows what happens when 1900 sheets of part and 100 tons of pressure meet. As my title above suggests, this is a lot more interesting than you’d expect.

The crush happens a couple of times and the results get more violent with each attempt. You guys an girls that know things about science and engineering will be able to explain this to us, but what causes the “explosion” here? Is it trapped air finding a way out or something else? The paper in a press trick is interesting in multiple ways as we have seen this same guy fold paper in the press until it was basically turned into stone.

You’d think on its face that nothing would happen if you exerted this much pressure on a stack of paper but the press operator knew better. He was hiding behind a barrier and could not actually see the initial results of his experiment. This is a dude who crushes lots of stuff so he knew something was about to go down if he went the extra mile and took cover. Cool, right?

Watch to see what happens when 1900 sheets of paper and 100 tons of pressure meet!

The Family Ferrari: This 1987 Lancia Thema 8.32 Is A Sports Sedan With Ferrari V8 Power! Nine Years And Counting: The Mud Pit In Moses Lake That Won't Be Defeated

One thought on “1900 Sheets Of Paper And 100 Tons Of Pressure Deliver More Entertainment Than We Expected!”