Does The 2015 Ford Expedition Mark The Beginning Of The End For Ford V8 Engines?

Ford announced the specs for the upcoming 2015 Ford Expedition and while that in itself isn’t all that BangShifty there’s an underlying situation involved with the Expedition that seems VERY much of interest to BangShifters. Why should we care about the 2015 Expedition, you ask? Mainly because there is no V8 option and we think this may be the canary in the coal mine for V8 engines at Ford. The EcoBoost program has been an amazing success for the company over the last few years and they continue to expand their line of turbocharged engines into smaller and smaller applications and displacements. We can’t really argue with the logic behind the decision because the 370hp and 400+ lb/ft of torque provided by the 3.5L V6 that will power the truck will hustle it on down the road with any of its V8 powered competitors but as a hot rodder that understands every large SUV and pickup built means another potential V8 engine source, this is creepy to us. How long until the F150 is a V6 only program? You’d then be left with the Super Duty line of trucks and the Mustang GT with V8 engines and we already know that the company is throwing some weight into new small displacement turbo options for the Mustang, so this could be the start down a slippery slope at Ford.

We know that the Ford engines aren’t as swapped as LS motors or traditional small blocks but the reality is that over time they’ll become more and more popular as everything does. There are still millions of them out there roaming around the streets of America, but when that “bank” stops getting filled up with new stuff being produced at Ford, the supply will immediately start to wane, no matter how slowly. GM has certainly gotten into the turbo act hot and heavy after lagging behind Ford over the last few years. Their 3.6L twin turbo engine is a power house like the EcoBoost and the smaller mills like the 2.0L four banger that can be found in the Malibu, Buick Regal, and others is a competent piece that stands on its own. Chrysler, now with Fiat steering the ship has announced that the current generation Hemi will be gone by the end of the decade and we’re seriously doubting a new V8 engine family will be coming from them. The company has so much money tied up into small diesels and other boosted four and six cylinder motors that it seems non-sensical that they’d devote the money and engineering on a clean sheet V8 family to supplement that. The long range thinker in us believes that they were quick to market with the diesel 1500 Ram because they’re setting themselves up to have a customer base familiar with the idea of NOT having a larger displacement V8 in their pickup but rather a smaller gas or diesel V6. Maybe we’ve got our tin foil hats on a little tight today, but you can see where we’re going with this.

GM’s new LT family of engines seems to have a long life ahead of it. The LS family had a run (that technically still continues) of well over 10 years so maybe GM will be the last brand standing in the V8 game by the time we get to 2020-2025 or so. We’re betting that Ford is going to be first out. Are we soft or do you think that the Expedition announcement is one of those moments where a sea change is actually starting to happen with how our cars are built and powered? 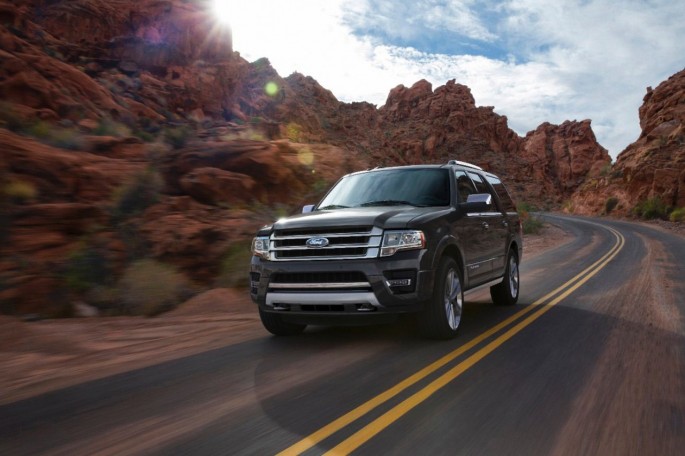 Gearhead Guys You Should Know: Larry Minor Video: The Hover-Barrow Was A Neat And BangShifty Solution To Job Site Drudgery - Cool Idea!

24 thoughts on “Does The 2015 Ford Expedition Mark The Beginning Of The End For Ford V8 Engines?”