Here’s What Happens When You Try To Fold A Piece Of Paper Seven Times With A Shop Press? 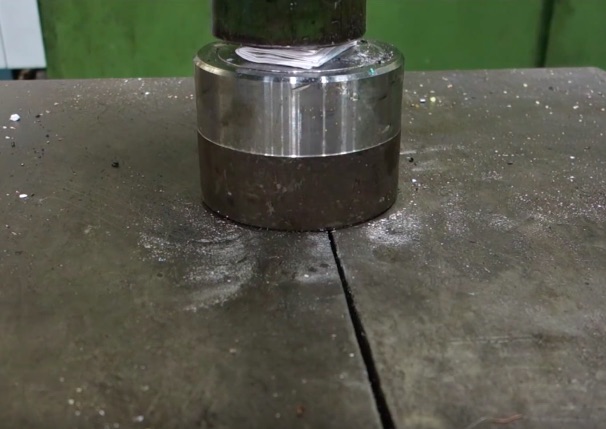 There’s something awesome about challenging existing knowledge, especially if that challenge is powered by a very powerful hydraulic shop press. In this case we have a video sent to us by BangShifter Matt Cramer that provides an awesome look into the forces generated by said press, all the while working to prove or disprove the thinking that you can only successfully fold a pice of part 7 times before you simply cannot anymore.

Adding to the goodness of this video is the press operator’s accent. We never see his face but we do see his hands folding the paper initially and placing it correctly so the press will squash it in the right direction. We have to warn you about two things. The first is that the end result is pretty awesome and the second is that there is some adult language used when the final fold is made and you’ll clearly see why.

Here’s what Matt said when he sent us the video:

Cool YouTube video on horsing around with shop tools. We’ve got a man who investigates whether you can fold an ordinary sheet of paper more than seven times…. using a large hydraulic shop press. We’ve seen things like the Mythbusters try to fold paper more than seven times using a mammoth sheet of paper, but here he’s using an A3 sheet (about twice the size of a letter-size sheet of paper) and using more force instead of more paper. And the results – well, it was a lot more dramatic than I (or the guy running the press) ever expected.

Press play to see it go down! WARNING – THERE IS SOME ADULT LANGUAGE —

One thought on “Here’s What Happens When You Try To Fold A Piece Of Paper Seven Times With A Shop Press?”