If At First You Don’t Succeed, Fail, Fail Again – Here’s A Rock Bouncing Video We’re Scratching Our Head Over 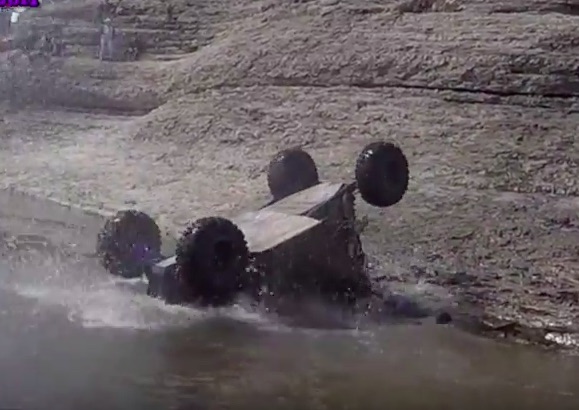 Before you start hucking rocks at us here, understand that we like rock bouncing, we get rock bouncing, and we think rock bouncing is generally bad ass. This video however has us scratching our head. Why? We get the idea of trying to tackle an obstacle a couple of times and trying different lines, approaches to bounding your way up but when you take a literally brand new rig and essentially drive it to destroy it we just miss the point. Also, when you do it with a passenger and neither of you are wearing helmets as you plummet down a rock face and into water multiple times, it gets even more confusing.

This RZR is bad ass. It has a turbocharged engine and clearly has power for days. The way that the little side by side accelerates on approach is freaking impressive and the fact that it is able to get as far up this rock known as Viagra is pretty awesome. Additionally, the cage and chassis on the thing is literally bombproof. It survives a few really hard rides and bashes without showing any signs of deformity of compromise. It totally protects the helmet-less driver and passenger each time they take the quick way down and it is apparently tall enough to keep them from drowning as well. Bonus!

Maybe we’re just being lame but it seems like if you tumble backwards down the same deal multiple times it would be wise to either change the line of attack, put a helmet on, or give someone else a shot at the obstacle. Not to mention the fact that the guy who had to keep turning this thing over were likely pretty tired by the time this was all said and done. Rock bouncing or rock tumbling. Is there a difference?

3 thoughts on “If At First You Don’t Succeed, Fail, Fail Again – Here’s A Rock Bouncing Video We’re Scratching Our Head Over”