Watch A Dump Truck Smash Into A House At Speed! Driver’s View 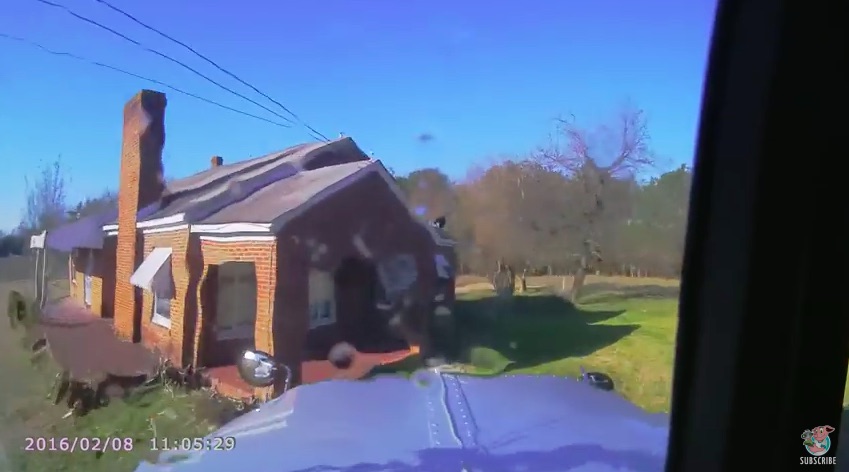 This is one of the most breathtaking videos we have ever seen and not for a good reason! What you are going to see is a truck driver’s worst nightmare coming to life. The driver of this big dump truck was tooling down a country road minding his own business when someone else’s actions literally sent him careening down a path to disaster. The video looks like something straight out of a Jerry Bruckheimer movie but there’s someone who lived it and he was behind the wheel. So what happened? You will see the truck cross an intersection. The streets to his right and left had stop signs and a driver failed to heed one of those, t-boning the truck and sending the huge vehicle out of control.

As nasty as this looks from the inside of the truck, imagine what it looked and sounded like from the outside! Whatever hit the truck had to have given the thing a massive shot to completely redirect it as it does. Never having been in this situation, we’re guessing that the truck is unloaded because if it were loaded it seems like the whole thing would flop over if struck this hard from the side.

There are no reports of anyone being seriously hurt or killed in this one. There are no cars in the driveway of the house and we’re only going to guess that it was unoccupied at the time of the crash. The place was surely condemned as the truck does as much damage as you’d expect a massive high way speeding battering ram to do. It brutalizes the structure.

The truck driver was in good enough shape to make a statement to the authorities and in the caption of the video they seemed to have included a piece of it. Here it is:

“I was operating a large dump truck when it was struck from the side by a vehicle which failed to stop at a duly erected stop sign. The impact caused my truck to lose control and strike a house.”

Thanks to Bob Syby for the tip!

Mark Williams Leads The Way In Drag Racing Driveshaft Technology, Safety, and Engineering Watch Kenny Delco's Rough Ride: Flips, And Spins, And Slides Oh My! Crashing Like This Is No Damn Good!

One thought on “Watch A Dump Truck Smash Into A House At Speed! Driver’s View”