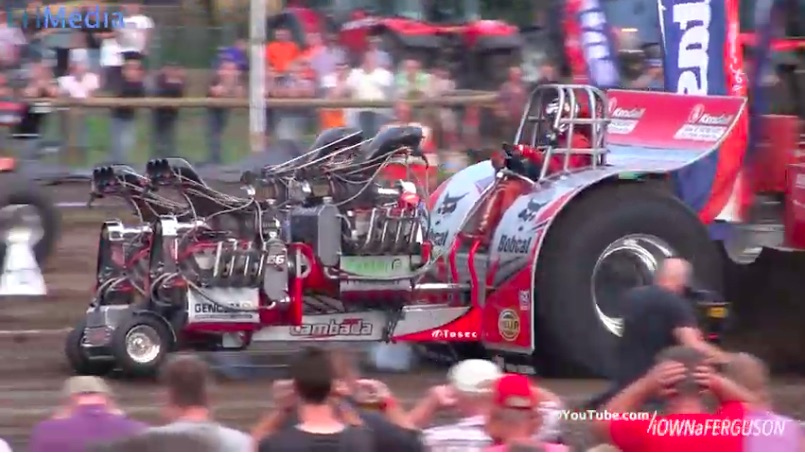 This is a fun video that shows, in rapid fire, why people like us love tractor pulling so damned much. There’s no delays here, there’s no crashes, hangups, or miscues. Nope, this is a video edited for rapid fire, shock and awe style entertainment featuring pulling tractors with LOADS of different engine combinations.

From the “typical” multiple blown hemi engine stuff to multiple turbines, diesels, turbocharged Allison V12 airplane engines, Rolls Royce airplane engines, and more, you are going to get a bath in horsepower here the likes of which you have not ever seen. A point that we bring up more often than we should probably is that the European scene has a lot more of the weirdo combinations being used that we see in American pulling. Perhaps it is about cost or perhaps it is about the rules package but the radial engines tractors (not shows here) and the diesel tank engine tractors (shown here) are something of a spectacle that one doesn’t really have the opportunity to take in on our shores. Why? Hopefully someone tells us in the comments.

If you love motorized competition and love it to the point of rooting for different engine styles and types, this video is perfection. The big tractors and 2WD trucks features here are all capable and some of them make frightening speed down the course with a load on their back.The place goes crazy with every full pull and this film once again proves that variety in motorsport is the spice of life.

Pressure-Cooked: Here's What Happens When A Tire Explodes Inside Of A Lada Tech Tips From BluePrint Engines: Whether You Are Buying An Engine or Not, This Tech Advice Will Help You

One thought on “Woosh, Scream, Roar, Whine: This Video Shows Off A Load Of Differently Powered Pulling Tractors In Rapid Fire Action”