SNOWBOUND! – How The US Army And American Industry Dug Out Several States During The Winter Of 1948/49 – Narrated By Paul Harvey 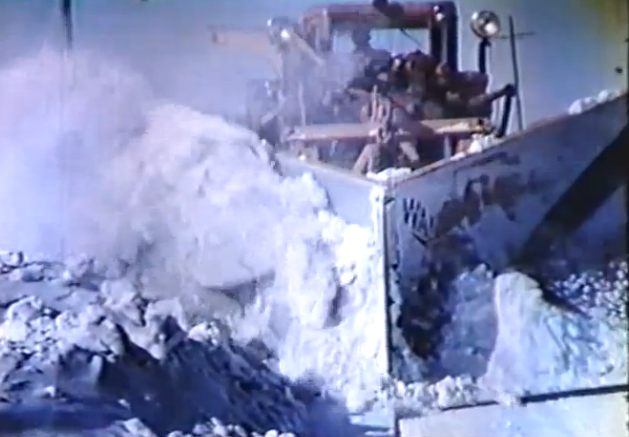 A couple of years ago, Buffalo got hammered with one of the all time record short term snowfall totals in American history. The seven feet of snow they got over the course of a day or two brought the city to a halt, brought the national guard out with as many machines as they can muster, and will long live in the lore of wild Buffalo lake effect weather. As brutal as this dumping on Buffalo was it looks like a minor inconvenience when compared to the disastrous winter that several midwestern/western states suffered during the end of 1948 and the beginning of 1949. Blizzards and storms piled up one after 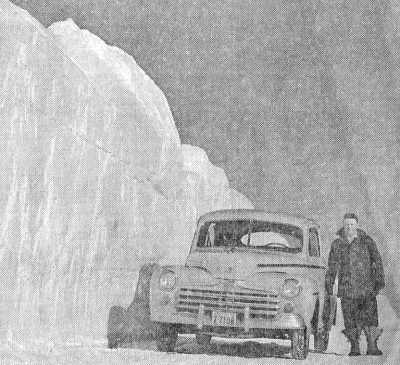 Only about half century before Photoshop.

the next until an area virtually the size of France, over 190,000 square miles was completely snowbound. Since this was rural country and many of the people suffering were farmers that had livestock, there was definite concern for their health and safety. The direness of their situation was recognized all the way at the top of the governmental food chain and the 5th Army was mobilized to help. They started moving men and equipment into the area and set forth clearing roads, opening up paths in fields and getting livestock food and shelter. The fear was so great for the cattle that the Air Force was actually used to air drop baled hay into fields to feed the beasts. Despite the best efforts there were big losses of life when it came to the animal population. There are lots of dead cows shown in the film (take note cow lovers!).

On the happy side, American industry teamed up with the Army and provided necessary equipment and expertise to move the operation along. The video below was made by the Allis-Chalmers company to both document the event for history and to promote their hearty machines, which if you believe the video were the only things anyone was using to save people and animals. Obviously there were Caterpillar bulldozers and other makes used as well, but this being an AC film, they saw to it that AC tractors were front and center. Perhaps the coolest part of this whole film, aside from the great footage of the vintage machines working and forging through the white piles is the narration by the legendary Paul Harvey. His voice spans the decades as one of the most recognizable in American history and his tone, inflection, and use of words alert keen listeners almost instantly that he’s providing the voice of the film although he is never credited on it.Despite temps hovering at more than 10-degrees below zero for lots of the operation, you’ll notice that the only machines with enclosed cabs are the road graders of which there weren’t many. The majority of the work was done by bulldozers which had open air operator seating. Yes, there were snap on canvas grousers that simply directed engine heat back at the guy pulling the handles but it had to have been miserable work. Harvey’s words do a lot to elevate the operators into heroes of sorts. In one particularly awesome line, Harvey says grimly, “Cold, tired, hungry, and alone, operators kept their rugged tractors moving, bucking, smashing, and pushing at the heavy ice layered snow….” That’s as close to poetry as you’ll ever see on BangShift and when delivered by Harvey’s voice it is enough to make you set your jaw with pride. He later refers to the operators as, “men of iron.” A line I also loved. 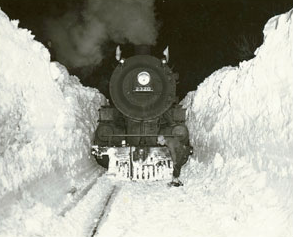 How much snow are we talking about? This was taken from cleared tracks after the blizzard.

The operation commenced in earnest on January 29th, 1949 and was concluded on March 15th. At its height, more than 1,000 bulldozers were working at once to open roads, open fields, and free people from their icy bonds. Below you’ll find a link to the full government report that was written as a review of the operation by the 5th Army and the video from Allis Chalmers that documented the massive and valiant effort. It seems that some expense was laid out for this film as there is lots of ariel footage and a general feel of a decently budgeted production for the era.

This was not a quaint romp through the snow. 115,000 miles of roads were opened, over 6,000 people were working simultaneously at the peak of the operation, four million head of livestock were fed and effectively saved from certain death, more than 1.2 million people were directly helped by this effort, and the cubic yards of snow moved, removed, and otherwise relocated number in the 10s of millions. A total of six people working in the operation died as a result of accidents and/or exposure to the elements.

The full report is a cool read because it shows some critical analysis of infrastructure, communication ability, equipment, etc. The military definitely got some useful information from this whole operation and the report spells out. From what equipment worked to what the challenges were and how things could be improved for the future, it is worth a look if you dig history.

Press play below to see SNOWBOUND! The story of this very necessary and very gutsy operation!

Now This Is How You BANG Some Shifts! Driver Is So Thrilled You Get A High Gear Fist Pump Too! Project Isolation Restoration: Time To Tackle The Walbro LME Carb Rebuild! Small Fuel Mixers Are Fun

One thought on “SNOWBOUND! – How The US Army And American Industry Dug Out Several States During The Winter Of 1948/49 – Narrated By Paul Harvey”