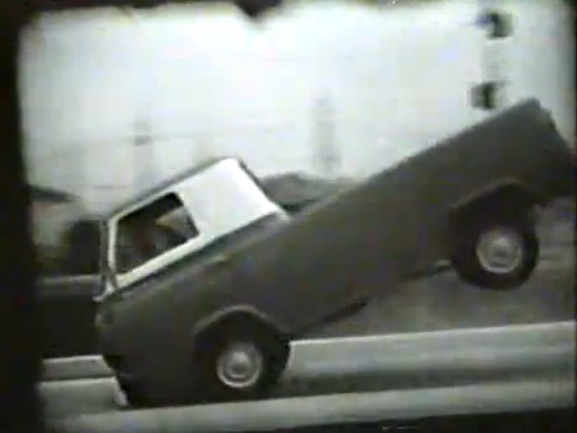 Cab forward trucks of the 1960s were a short lived and neat period in light truckin’ history. There were Forward Control Jeeps, the Chevy Corvair truck, The Ford Econoline, and the Dodge A100 trucks. They all have super unique looks and they have great appeal for gearheads and hot rodders looking for something different these days. One thing we have always wondered about them has centered around their driving dynamic. All of those trucks were pretty nose heavy with only the Chevy being better balanced due to the flat six cylinder engine under the bed floor in the rear. The rest of the trucks had a ton of weight bias towards the front. Wait until you see how that works out.

This video is full of the kind of “tests” that manufacturers are still involved with today. The video was made with Chevrolet backing so the film is very skewed in their favor but it is an interesting watch nonetheless. The first test is the most mundane with the two trucks trying to navigate uneven ground at a construction site. The Corvair motors through but the Econoline is hung up in no time flat. From that point forward, the film gets really cool.

Between the guys sliding the trucks around on ice, lifting the back of the Econoline up and said Econoline grinding the bumper during a 45mph panic stop, we’re wondering how masses of people didn’t die in these trucks. It is hilarious that the Corvair car became public enemy number one but the Econoline truck nearly front flips over during hard braking and everyone was like, “Yeah, cool. We’re good.” We give credit to the test drivers because it must have been a slightly uncomfortable feeling to be face first with the windshield and then staring down at the ground with your foot planted on the brakes. The battle of “my stuff is better than your stuff” rages on even today.

PRESS PLAY BELOW FOR A GREAT VIDEO FEATURING A HEAD TO HEAD TEST OF AN ECONOLINE TRUCK VERSUS A CORVAIR TRUCK!