Video: A Russian Truck Driver Improbably Escapes Sure Death – Falls Through Windshield During Wreck – Walks Away 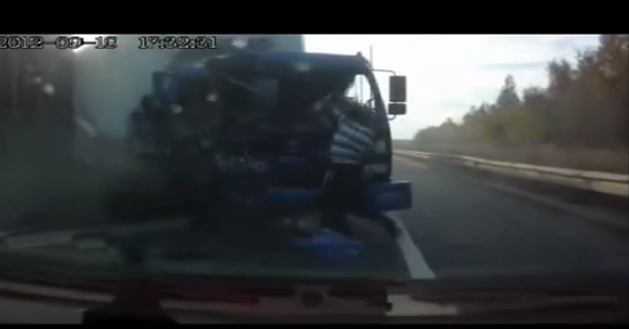 We know today has been like video-palooza, but they’ve all been so good the deserve to be seen! We were tipped off to this amazing Russian dash-cam footage of a big rig wreck by Matt Cramer. As you’ll see in the video the driver of the truck in front of the camera makes a horrible decision to try and rip off a left hand turn before another on coming truck crashes into him. SPOILER ALERT: He didn’t make the turn in time and the other truck does smash into the turning truck…hard. The driver of the on coming truck made an evasive maneuver to his left which totally saved his life because the right corner of the cab over truck strikes the trailer of the turning rig and the impact is big enough that the driver is launched out through the windshield and lands on his feet, actually walking away from the wreck.

Lots of totally crazy stuff happens during the milliseconds a big crash takes shape and this is a pretty clear example of that fact. The odds against this guy living through the crash are so astronomically high they’d make you dizzy. Add in the crazy nature of his escape and this is a man who used up every potential favor from the man upstairs in one shot.

No other words for this one except, Press play below!

Don Garlits And The Swamp Rat 37 Electric Dragster Are On The Track Today In Search Of 200 MPH! Up To The Minute Updates Here! Classic Gearhead Humor Video: Bill Cosby's Routine About His Short Ownership of a Twin Blown Shelby Cobra - 200 MPH

2 thoughts on “Video: A Russian Truck Driver Improbably Escapes Sure Death – Falls Through Windshield During Wreck – Walks Away”