Video: The Sverige S1 Is A 2,000hp Mahogany Boat Built To Fulfill The Dreams Of Swedish Engineers From 80 Years Ago 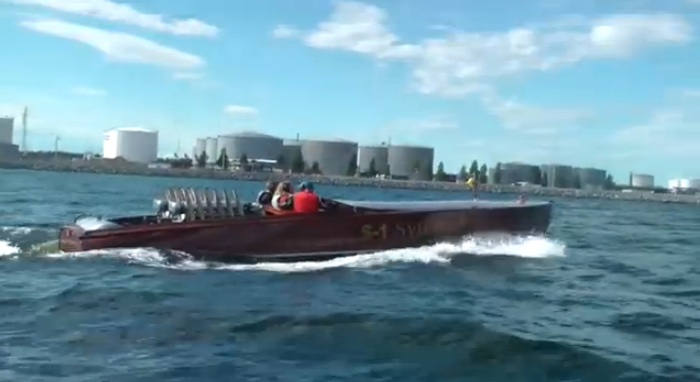 We’ve run stories in the past telling you about the incredible racing boats of the 1920s and 1930s that were commissioned and operated by wildly rich guys of that era. Guys like Gar Wood and others who had more money than they knew what to do with built these boats and spared no expense. They were often powered by mighty airplane engine or one off mills designed by engineering firms the world over. The races were about personal and national prestige and these craft were the precursors to the awesome off-shore racing boats of today. The Harmsworth Cup was the race that really attracted the world’s attention and no one was more dominant than American Gar Wood. From 1920-1933 he won every single contest, defeating boats from all corner of his own continent and several others as well. His last boat, the Miss America X had four Packard V12 engines and could run over 125-mph in the right conditions. Here’s a story we did on that boat. Wood also had the important distinction of being the first man to travel 100mph, a feat that he accomplished in 1931. Why are we telling you all of this? Because the boat you are going to see below was birthed…at least on paper back in 1930 when the 100mph crown was still anyone’s to grab.

The Swedish Royal Motorboat Club got together and decided that someone needed to take Gar Wood down and they decided that it should be a Swedish boat with Swedish drivers. They designs were drawn up, the plans were made, and then nothing happened for 80 years. Yep, the thing just died right there on the design table, but people being what they are and national pride being what it is, the project was picked up again, some 80 years later and it is actually alive now and terrorizing Swedish waters. While still in the tuning and sorting out phase the boat is awesome, using two Rolls Royce Meteor engines that both wear a pair of ProChargers to bump their power from 650 to 1,000 with a conservative tune up. The intention of this whole project is to take the awesome craft and punch it through the 100mph barrier on the water, just as the members at the Swedish Motorboat Club wanted to do back at the dawn of the 1930s.

Yes, we know that the 12-cylinder Meteor engine was not around in 1930, but frankly who cares? It isn’t like they have a couple of flipping LS engines in the thing for Pete’s sake, right? The Meteor s the less powerful brother of the Merlin. While about 80% of the parts interchange, the major difference is that the Meteor was never intended to be supercharged. It was used in Swedish tanks for many years and these engines were bought right from the Swedish government at auction. They had been rebuilt and mothballed in 1991 before being inspected again after the purchase. The blowers are the same kind you would put on your hot rod. Why did they not use turbos? The answer is pretty simple. NO boats of that era used turbos. Many did use centrifugal blowers so that’s the way they decided to go with the project. The team did add EFI, but we’re not thinking that’s a bad thing.

We think that this whole thing is entirely flipping awesome. The fact that Swedish craftsmen are building the boat, the engines came from Swedish army tanks, and they are staying as true to the history as possible is just icing on the cake. We’re hoping that the fellows get their project fully sorted and blow right on past that 100mph mark on the water. It would be a national victory nearly a century in the coming.

CLICK HERE to see some amazing construction photos of the Sverige S1
Go Home And Drink: The 2020 SEMA Show Will Not Take Place Pop Goes The Frunk-Lid: The C8 Corvette's Frunk Lid Opens By Itself?

One thought on “Video: The Sverige S1 Is A 2,000hp Mahogany Boat Built To Fulfill The Dreams Of Swedish Engineers From 80 Years Ago”