Wild Video: Watch These British Navy Guys Cheerfully Disarm A Mine In 1940 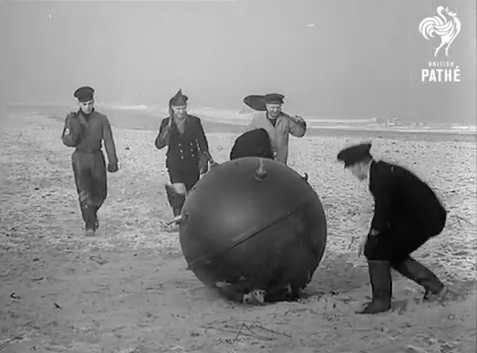 WWII in England had to have been a time of indescribable feelings. There was the patriotism involved in defending their country, the terror of knowing that missiles could rain down at any moment, the knowledge that the seas surrounding the country were loaded with U-Boats, and of course the understanding that across a thin body of water the worst stuff in modern human history was happening. Through it all the country remained themselves. They were tough, unflinching, and when they took a shot they stood up, dusted themselves off, and then kept on fighting. Hell, when you see this video you know that you cannot beat a country that depicts disarming a random mine that washed up on shore as cheerily as this one! The narrator and workers seem downright thrilled with the job at hand. We’re wondering how many times the camera man asked if they knew what they were doing.

It is pretty cool from a gearhead’s view to see how this thing is disassembled and disarmed. The different parts and pieces that come out of it are cool as is the knowledge that the Navy officer has as he empties his pockets and removed his coat. As first we thought it was so he would not get it dirty but the narrator explains that if this were a magnetically triggered mine it could blow up just in the presence of metal. Things go swimmingly after it is determined that the mine is not magnetically triggered.

We’re not sure which part is the most dangerous here but it sure seems like ALL THE PARTS are dangerous but that is just us.

American PowerTrain Starting Shift: Working A Detroit Diesel Up Through The Gears And Back Down Again On A Grade Watch Smokey Yunick Make A Side Splitting Speech From His Induction Into the Daytona Stock Car Racing Hall of Fame

One thought on “Wild Video: Watch These British Navy Guys Cheerfully Disarm A Mine In 1940”