WOW! These Apocalyptic Looking Buses Were Used to Shuttle People Onto A Canadian Glacier For Decades – Tracked Monster Buses! 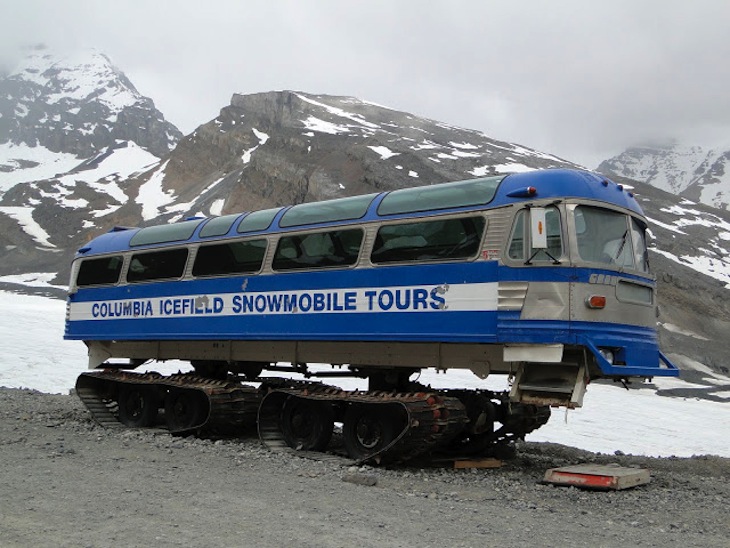 Sorry if we just made your eyes bug out of your head. That was our initial reaction after getting an email from a Canadian reader who saw yesterday’s cool little tracked VW bus and then sent us a couple of links to photos of these amazing machines which we believe were built by the Snowcat company decades ago! Snowcat didn’t build the buses obviously but we think that they did the conversion work to add the tracks and driven axles to make them “four wheel drive” if you know what we mean. As we spent some time working on buses for a few years you’ll be shocked to know that we remember a thing or two about the long tubular vehicles. In this case we believe that the buses are actual GM PD-4103s which were designed to be intercity buses. These have roof windows on them which we think we either added custom at the factory or added later. The PD-4013 has the three clearance lights at the front of the roof, the “forward leaning” windows” and the same style nose that these buses have. If we’re wrong about the specific model, it we’re nearly 100% sure that they are at least GM buses of the 1950s or early 1960s. Stuff started to get more square after that period.

We can find nothing definitive about these tracked monster buses so here’s what we can tell you for sure (assuming that these are PD-4103 model buses). Manufactured in 1951 and 1952, they were primarily sold to outfits like Greyhoud, Trailways, and other large bus companies. It is funny to think about, but these things were like the airliners of their today. Air travel back then was a luxurious experience that the well-to-do could afford while the masses rode in cramped tubes and made the best of it. Bus travel hasn’t changed much over the years but air travel sure has turned into looking a lot more like bus travel used to! Anyway, these buses were powered by the venerable 6-71 Detroit Diesel and we’re guessing that’s what still drives them today. Hilarious to think about on a glacier, but the buses actually used a small separate diesel engine to run the air conditioning system! We’re guessing that AC didn’t get a whole lot of use for the many years that these creatures crawled and shook their way to the glacier with a load of passengers. Apparently these buses were jokingly nicknamed “Shake and Bake” because of their rough riding ways.

While there looks to be two rectangle shaped frames stacked up on each other here, the PD-4103 bus did have a steel frame and was apparently the last GM bus that used a frame of this type before the PD-4104 which was of aluminum monocoque construction. A couple thousand of these buses were sold new and through our research we have learned that they were operated well into the 1970s. Our guess would be that these were bought used by the Columbia Icefield Glacier tours company and then converted sometime in the 1960s or 1970s. We wish that there were some sort of a history published somewhere but if there is, we certainly cannot locate it. Anyone know anything else?

The tracked buses have since been retired for far more modern coaches that roll on huge monster-truck style tires and must provide a ride about 6,000% better than these old battle wagons. We have provided photos of the new coaches below a quickie video of an old “shake and bake” below. The new coaches seat more people, have safer ingress and egress, and they look pretty awesome with their six huge tires, six wheel drive, and overall zombie-ready style. Nothing will ever been cooler than an elevated coach bus on tracks but the new ones certainly get the work done and leave everyone in a better state for it.

If you want to cruise on one of those new buses, make your way to the Columbia Icefield in the Rocky Mountains of western Canada. We hear the glacier is shrinking so maybe there will be a cheap huge monster bus for sale soon. Think we can cut them a deal on a tracked model? Hey, if you stop by see if you can get some history while you are there! 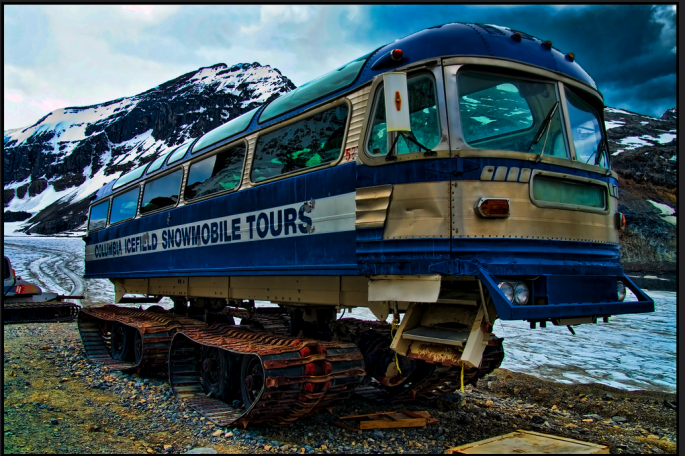 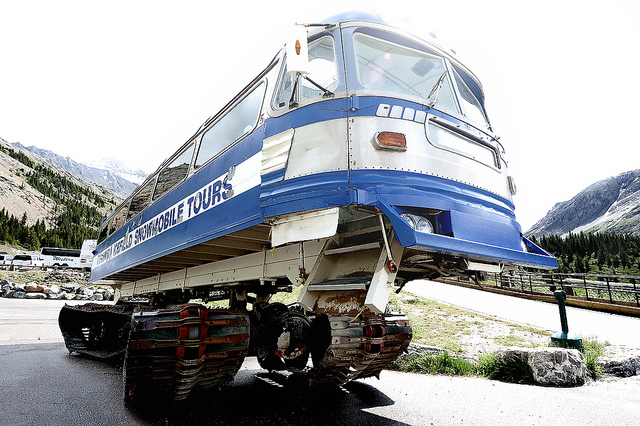 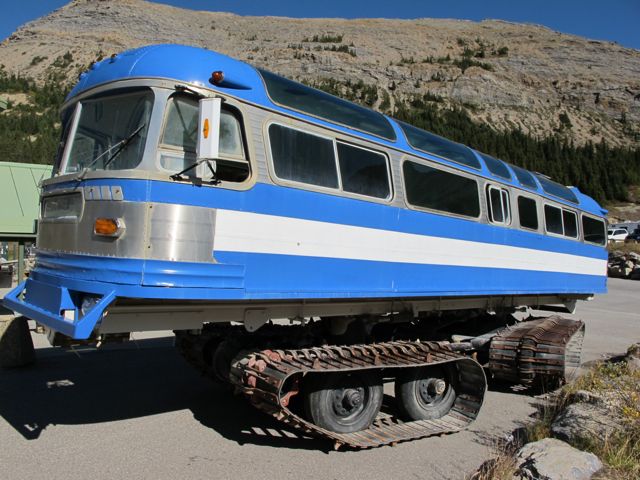 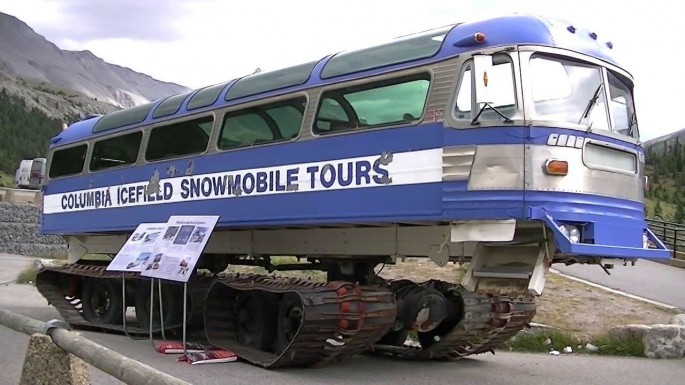 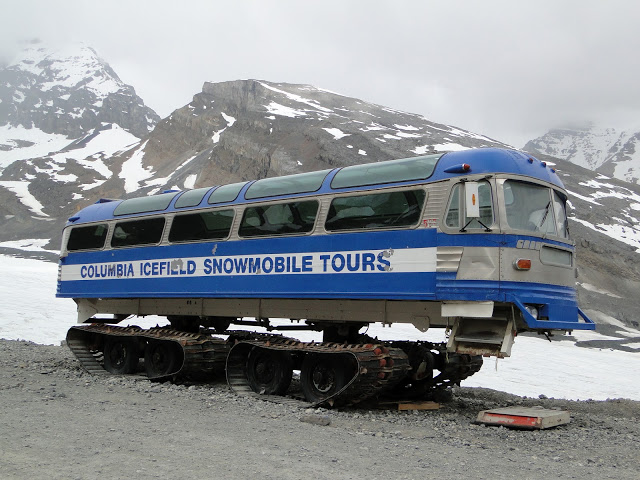 Old Snowcat Bus Icefield Explorer on the Athabaska Glacier of the Columbia Icefield in Jasper National Park Canada 2011! from David Heath on Vimeo. 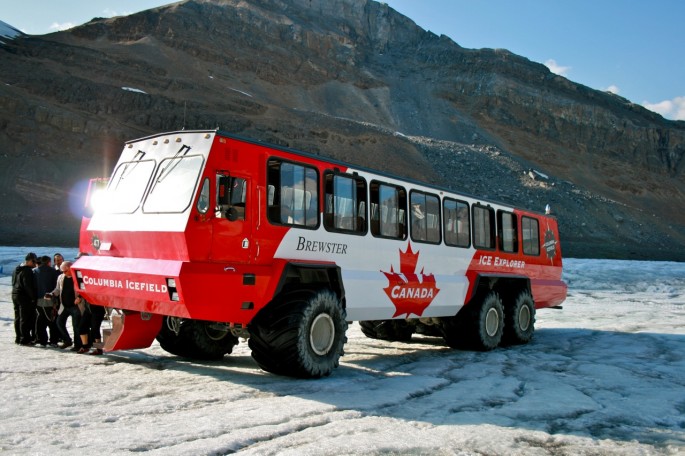 2014 Boonesborough Boogie Nationals: Street Rods And Only Street Rods From The Show 1969 Chevelle Body + NASCAR Chassis + 700hp Small Block = One Of The Coolest Projects Ever

4 thoughts on “WOW! These Apocalyptic Looking Buses Were Used to Shuttle People Onto A Canadian Glacier For Decades – Tracked Monster Buses!”