Feb 22, 2015Brian LohnesBangShift News, FUNNY STUFF, HISTORIC, VideosComments Off on 1962’s Duel In The Desert May Be The Best Old Chevy Propaganda Film Yet 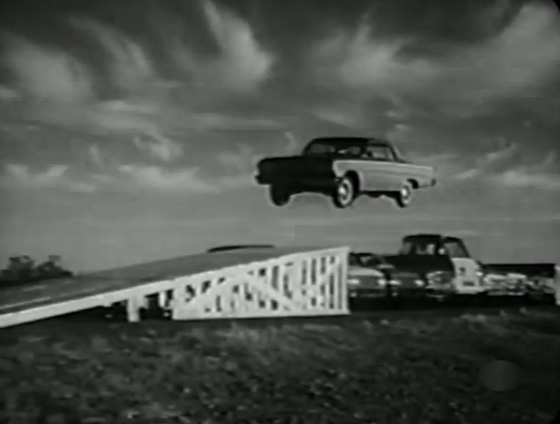 What’s better than old manufacturer promotion films? These movies are hilarious as they were designed for use by the sales managers at dealerships to get their sales staffs all whipped up into a lather about how much better the coming crop of Chevrolet cars were than the competing Fords, Chryslers, Ramblers, etc. All of the “testing” done in these videos is pretty humorous and quite easily manipulated do don’t go writing us angry emails about how we’re blindly taking sides. To us the value in these is the laughs they bring on by having the cars do campy stuff like race a plane, go careening over huge bumps, and with respect to pickups, see how well the tailgates survive a small explosion in the bed. You know, real world stuff.

There’s jumping and plenty of driving over rough desert terrain at trophy truck speeds in stuff like Corvairs. Also, there’s plenty of blatant ripping on the competition as you’ll see. These videos weren’t about pointing out the few differences between Chevrolet’s offerings and those of the other companies. Nope, they were completely centered around showing the unassailable superiority of their cars and the homeliness, weakness, and otherwise lameness of the competition…especially Ford. Boy do they take some wide open shots at the blue oval offerings! Of course this was when both of those companies owned the VAST majority of the share in the US auto market and they could get away with throwing haymakers at each other.

Time sure have changed.

PRESS PLAY BELOW FOR THE FUN!

The Quest To Find The Best Snow Mover Continues: This Tracked Case Monster Is Now In The Lead, Right? Rough Start, The Import Edition: Bringing A Chrysler Ute Into The U.S.