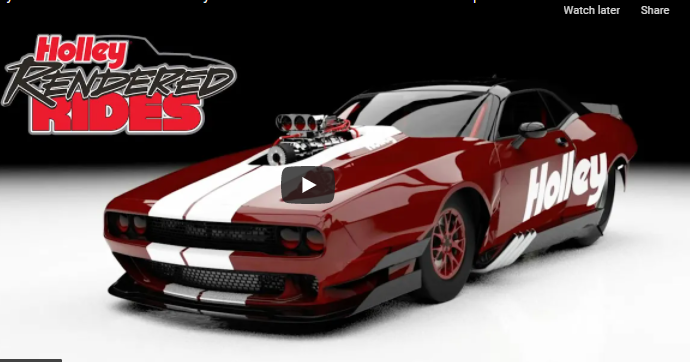 Holley has been doing a new video series called Rendered Rides where they put something out there and ask folks to chime in on whether it is good, bad, weird, or what. This latest one is about Funny Cars, or the bodies on them to be more specific. And while the Challenger in the rendering is modern, the message this rendering sends is really harkening back to the days when Funny Cars were identifiable as a specific make and model. And before you argue that you can tell what modern funny cars are supposed to be, keep in mind that this is only because of the badging. Remember, Chevrolet signd with John Force as his sponsor a few years ago and they didn’t have Camaro bodies available for months after the deal was signed. Instead, they ran the Mustang bodies with a Camaro grill and emblems. No, it didn’t look like a Camaro, but it didn’t look like a Mustang either.

There was a time when nitro-huffing, monsters resembling Challengers, Camaros, Mustangs, and more took to the staging lanes, duking it out on track in a blaze of flames and glory. Today, the Funny Car class has been wind-tunnel-honed into shapes only subtly reminiscent of their brand heritage. We teamed up with designer Rotislav Prokop to imagine what a modern, Mopar, Funny Car might look like.

Mopar's Wing Cars: Do You Know What The Differences Are Between A Dodge Daytona And Plymouth Superbird? Truck Tugging Video: It's Like The Redneck Version Of Tractor Pulling... Wait, What?