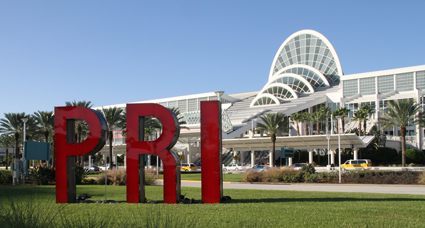 Some breaking industry news this afternoon as SEMA has purchased the Performance Racing Industry show and will take over its operation starting this year. The PRI show, for those of you unaware, is an industry trade show that is much more directly targeted at racing and hard core parts. There are no mud flaps, bejeweled small block Chevy engines, or dash mounted dancing hula girls. There are stock cars, racing boats, dragsters, and wall to wall heavy duty parts from wall to wall in Orlando where the show is held.

While we were there this year we happened to enter into conversation with a few of the man SEMA people we saw walking around. We asked them why there were so many folks from the organization milling about and we were told that they were just observing the show and checking things out. Looking back, they were probably working on their plans for the 2012 version of the PRI show as this deal has most likely been in the works for some time. PRI has been going for 25 years and for the entirety of the show’s existence, it has been run by Steve Lewis. Lewis’s son is a talented racing driver and competes in open wheel races all over the world. Lewis is going to devote his time to developing his son’s career and cited this reason for selling PRI to SEMA.

We think that this is great news and both PRI and SEMA should benefit from the sale. We’ll be at both shows again this year so it will be easy to see any differences as compared to the 2011 versions.

Performance Racing Industry (PRI), producers of the motorsports business magazine and trade show, finalized plans to be purchased by the Specialty Equipment Market Association (SEMA). The transaction is set to close in late March 2012.

With 20-plus years of publishing and management experience at PRI, John Kilroy will serve as Vice President/General Manager of PRI and assume day-to-day operations for the group. All the operations, employees and offices will remain intact at PRI’s current location in Laguna Beach, California.

“Steve Lewis launched the PRI concept a quarter-of-a-century ago, as an organization totally dedicated solely to the racing industry,” said Kilroy. “It was Steve’s dream that PRI continue to serve the racing community, and to ‘nest’ PRI with an organization that clearly understands PRI’s heritage and the role we play in how the racing industry conducts business. We are pleased to have found that strategic partner in SEMA.”

Lewis, founder and current CEO of PRI, will now be able to dedicate his time and energy to pursue his lifelong passion for motorsports, which includes management of his Nine Racing midget team and supporting the racing career of his son Michael, 2011 Formula 3 Italia Rookie of the Year.

“We carefully considered all our options, and SEMA was the obvious choice to carry on the legacy of the PRI brand,” said Lewis. “SEMA is financially sound and has an experienced management team. They bring a long-term outlook to the table, as well as exceptional insight into the trade show business overall. I have no doubt that the PRI brand will continue to deliver value to the racing community, and I know John Kilroy and the current management group will keep the basic business themes that have been established as they continue to work out of the current location here in Laguna Beach that has housed the PRI family for all these years,” he said.

Many current and past SEMA Board of Directors have been involved with PRI through the years as exhibitors and advertisers and bring a keen understanding of how the two organizations complement each other.

“We’re very excited about the continuation of the great business offerings for the performance and racing community from this acquisition,” said Scooter Brothers, SEMA Chairman of the Board. “Having worked with the folks from PRI for many years, I know the show and magazine are appreciated and used by the racing industry to further their marketing efforts, and that racing entrepreneurs look upon the PRI Trade Show as a unique event and a valuable voice. The transition will preserve and protect that voice, and the show’s unique character and authenticity. We look forward to the PRI team carrying on the legacy and traditions of Steve Lewis.

“We also want to thank Steve Lewis for all he’s done for the racing industry, and for creating PRI,” added Brothers. “PRI Magazine and the PRI Trade Show have played a key role in the growth of the racing industry over the past 25 years, and we look forward to its continued success.”

SEMA President Chris Kersting said, “The Performance Racing Industry Trade Show and magazine are great complements to the SEMA mission: they help their customers’ businesses to succeed. SEMA looks forward to providing the PRI team the resources and support to continue delivering great value to the racing and performance segment.”

Founded in 1963, the SEMA trade association provides services and resources to businesses in the automotive specialty equipment industry. Members include manufacturers, distributors, retailers and marketers of products that enhance the styling and functionality of cars, trucks and SUVs. In addition to producing the premier automotive accessories trade show, where more than 100,000 individuals come to do business, SEMA offers education, research and several publications specifically targeted to the industry. The association also represents its members with a legislative advocacy group.

The 25th Annual Performance Racing Industry Trade Show takes place November 29 – December 1, 2012, in the North/South Building of the Orange County Convention Center in Orlando, Florida. It features exhibits by 1,100 racing companies in 3,100 booths, requiring 700,000 square feet to house the event. 38,000 buyers will attend from across the US, and 72 countries.

Progress Continues on Ridetech's Killer Factory Five '33 Build Watch a Nitrous Pop Blow the Scoop Off of a Mustang Drag Race Car and Then Kill the Roof Camera!