Casey Buys A Car He’s Never Seen: I GOT A BIG SURPRISE FROM A CAR I BOUGHT WITHOUT SEEING IT FIRST! SIGHT UNSEEN RAT ROD! NEXT BUILD?

Mar 06, 2022Chad ReynoldsCar Features, CAR FEATURES, CHEVY, CHEVY, Project Cars, VideosComments Off on Casey Buys A Car He’s Never Seen: I GOT A BIG SURPRISE FROM A CAR I BOUGHT WITHOUT SEEING IT FIRST! SIGHT UNSEEN RAT ROD! NEXT BUILD? 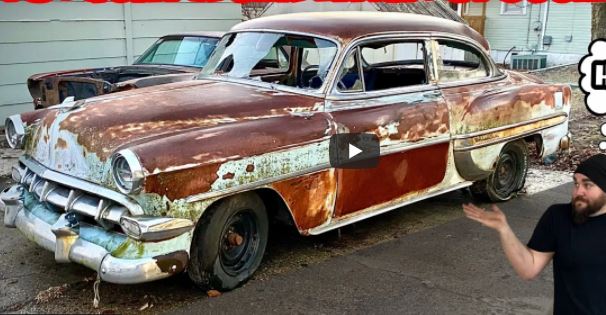 Have you ever bought a car without actually looking at it? I don’t mean online with just pictures, I mean have you ever bought a car that you have never even seen a photo of? I think I could do it if one of two things was going on. First, if a friend of mine had seen it and told me how it really was then I would be good. Or, if the deal was so good that you couldn’t possibly go wrong anyway. Those kinds of deals are few and far between, however.

Casey saw this thing on Facebook Marketplace with just a couple of really horrible photos and that it was sitting in mud and he figured everything was rusting out of it. This is what the seller said, as he described the car as being in really rusty condition. The photos were crap but Casey thought it looked like the outside of the body was “okay” and because the seller kept dropping the price he threw a number at the guy and $800 later it was his. He hasn’t look at it at all before it got to his house as he had a buddy grab it with his tow truck.

See what kind of condition it is in along with Casey and we’ll see if he got a deal or got screwed.

On this Sunday bonus video i buy a 1954 Chevy bel air without seeing it first! I am very surprised at the shape of the car, so Come with me as i go over the car and we can find out if it was a bad buy or not.