Hot Rod Garage Meets The Crusher Camaro! The 1970s Street Machine Look Is Ditched In The Name Of Handling! 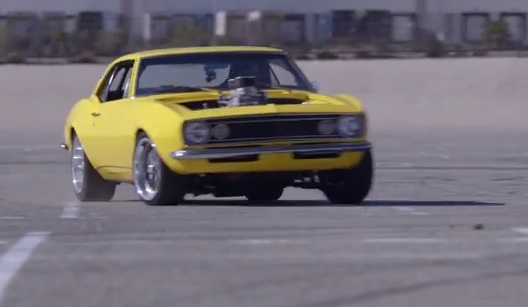 Hot Rod’s Crusher Camaro is the other bright yellow Chevy magazine project car that seems to evolve every few years, causing a stir with fans and readers alike. Not that Freiburger, the Crusher’s owner, really cares, but that’s just the nature of the beast when you have such an iconic car on your hands. The last time we had seen the Crusher, it was rocking the 1970s vibe, with a high stance, the skinny up front/fat out back rolling stock, and the hoodless/tunnel ram setup on a Mast Motorsports LS engine. While we can dig the ’70s look, handling is in and with the modern powerplant, modern handling would elevate the Crusher into something more evolved and, dare we say, mature. The Crusher has been a Pro Touring rig in the past, but the QA1 suspension setup that Freiburger and Tony Angelo stuff under the front end is a nice halfway point between stock and overkill. Why the front? Well…the back is a little more custom. Hit play below and see for yourself:

Update: Jason Tabscott's Truck Found! Now, We Need To Locate His Stolen 1975 Camaro! Rough Start: A Big-Block Cordoba That Looks Daily-Driver Ready - And It's Under Budget!

4 thoughts on “Hot Rod Garage Meets The Crusher Camaro! The 1970s Street Machine Look Is Ditched In The Name Of Handling!”