Best of 2019: FoxKart – How An Ohio-Rotted 1986 Mustang Convertible Got A Second Lease On Life! 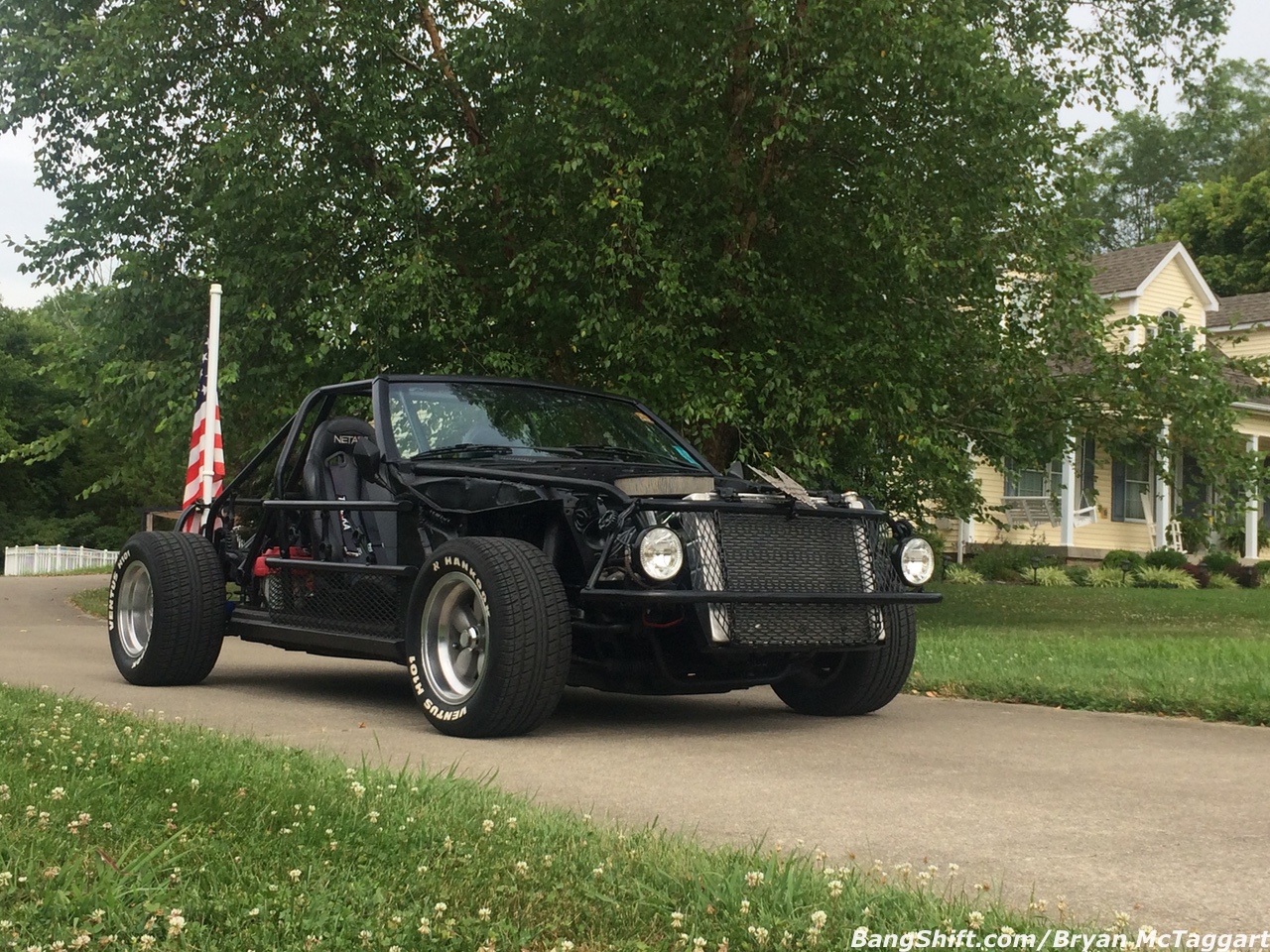 The first words that came out of my mouth once I exited the car were as straightforward as it gets: “How the hell do you have a car like this in a neighborhood that has to have the HOA from hell?!” Looking at the homes I had driven a few miles into, through neighborhoods with custom street name signs and special speed limit signs and manicured lawns as far as the eye could see, none of it seemed conducive to building the automotive equivalent of two middle fingers held high while chugging a beer through a funnel at a kick-ass party, does it? Looking at the area where father-and-son duo Aaron and Shane Bickett live, you’d be correct for thinking that one loud exhaust note, let alone coming out of the driveway sideways while letting second gear hunt for traction at it’s own leisure, would immediately call down the clipboard-wielding hoards, but Aaron just cut a sly smile as he explained that his house, his garage, and his car hobby all pre-date the HOA that is in place and that while he isn’t always doing his best to torment the more uptight neighbors, that if he feels a little frisky one day and someone gets offended by it, that he’s got a great suggestion for what they can do with their clipboard and their tsk-tsk-ing. 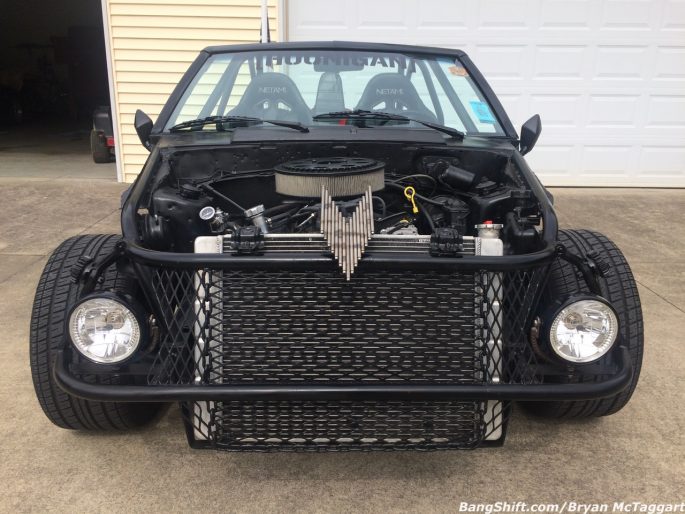 The comparison is going to happen no matter what, so let’s get that out of the way: yes, it looks like a dead-ringer to the “Vette-Kart”, the 1985 C4 Corvette that Freiburger, Finnegan, Rob Kinnan and our own Chad put on the ultimate diet in the name of Colin Chapman-style power gains before it became a staple Roadkill vehicle. Much like that derelict C4 that was dragged out of a desert and carved up like a Thanksgiving turkey for a Hot Rod article that seemed designed to piss off just about everybody and their mother, the FoxKart was in a similar situation: 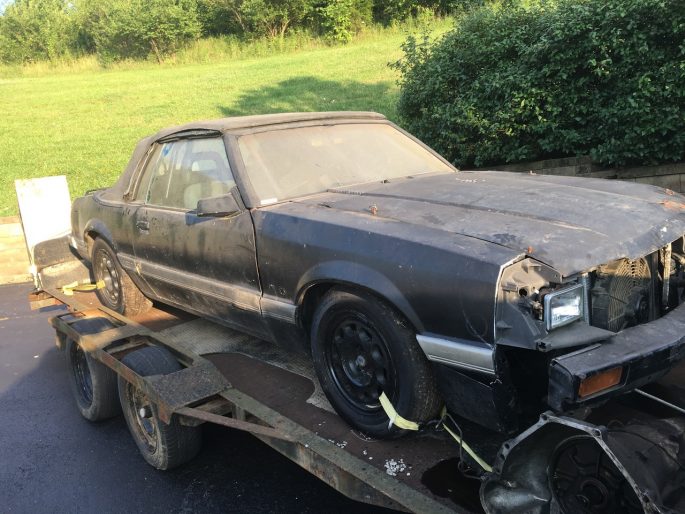 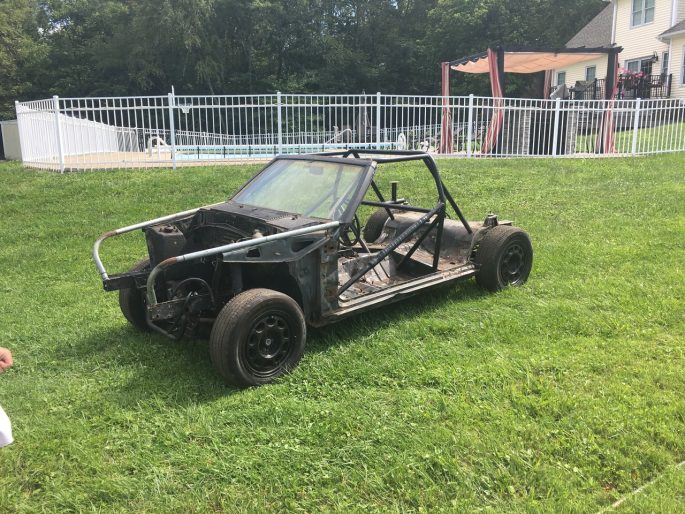 After gaining inspiration for an adult go-kart from the Roadkill build, Aaron and Shane set out looking for a prime candidate that was not a Corvette. It wasn’t like there weren’t options…everything from E30 BMWs to Miatas have been given the hack-and-chop treatment in the name of light performance, and they almost settled on a Scion FR-S that had been wrecked. But it was this 1986 Mustang ragtop that had been used, abused, left for dead and hit with the folding chair while down for good measure that wound up being the origin of the build, due to Aaron’s knowledge of Ford products and the plethora of aftermarket support. To say that the car was rough is an understatement…you don’t see much of it in the photograph, but the entire nose of the car got smeared after a drifting incident went wrong, wiping the nose cone clean off of the Ohio-sourced car. And while we’re on the subject of Ohio, let’s talk about rust. This Fox had tons of it, from missing floorboards to crispy body panels. By all accounts, this car should’ve wound up as a metal pancake on a slow boat to China. Instead, it wound up at the Bickett’s house, where the sawzall, death wheels, welder and vision were waiting with open arms.

The original plan was simple: $2,000 dollars, 2,000 pounds, with the ultimate goal of hauling ass for as little cash input as possible. There were plenty of parts hanging around the shop thanks to a few projects of Aaron’s, including a monster SN-95 Mustang and a 1955 Ford pickup that he used to race in the 1980s. In reality, the total of the build is $3,600 invested with an additional $700 worth of tires on the car, and it weighs in at 2,400 pounds as you see it. The guts are proven parts: a small-block Ford with GT-40 heads and an MSD ignition system breathes through BBK headers and sends the grunt through a T-5 to SN-95 Mustang parts, specifically a 4.10-equipped rear axle and vintage American Racing 200S wheels that came off of Aaron’s Ford truck. In a 2,400 pound car, that’s more than enough to get silly with. But I didn’t just seek this car out because it was chopped down to nearly nothing. It’s the detail work put into the car that caught my eye, so let’s take a look at that. 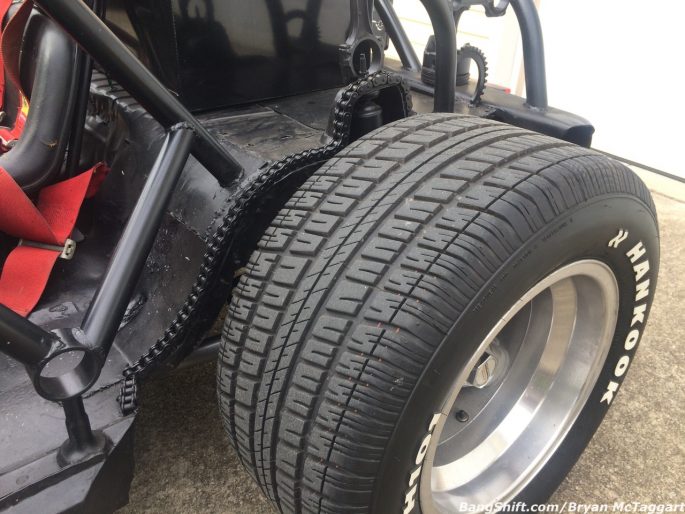 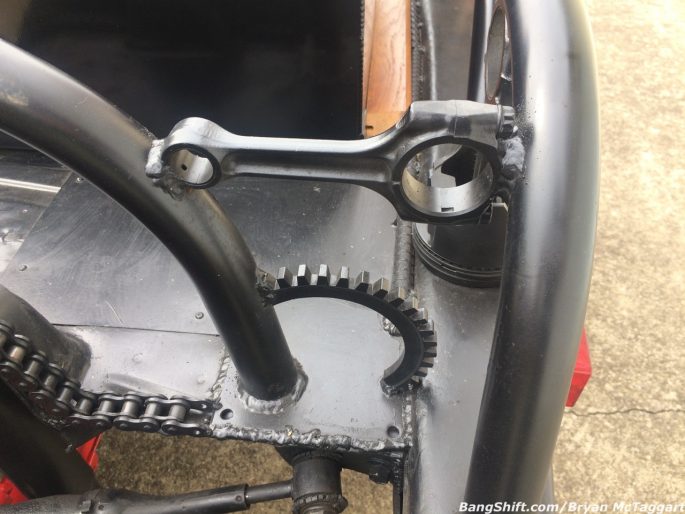 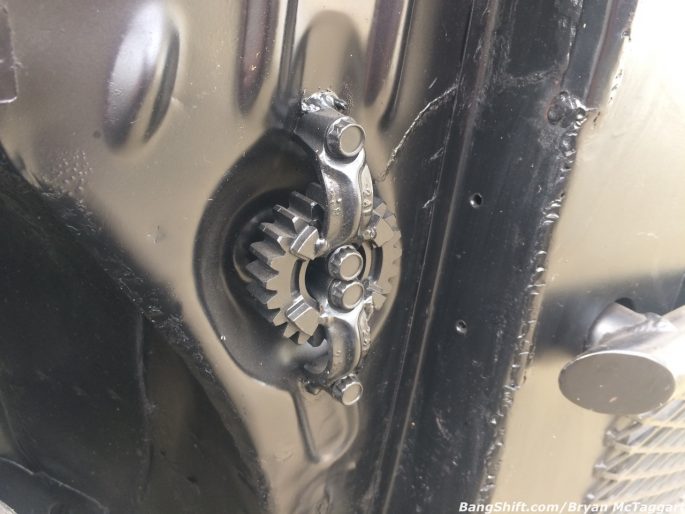 It’s easy to just carve off every last ounce of unnecessary body and unneeded structure off of a car, bend up enough tubes to keep you alive the moment you inevitably get too stupid while driving, and call it a day. Some builds we’ve seen make us wonder if even that happens. But here, there’s more than just a rollcage…look at the details of what did and didn’t go into the car. There isn’t much floorpan after the rear axle because aesthetically, it didn’t work…originally the plan was to keep the original fuel tank setup. When the doors and fenders were ditched, the holes that were now visible were so off-putting that connecting rod caps and a gear were used to fill in that visual void. The space between the aluminum dashboard and the windshield was filled in with the bug deflector from a 1994 Toyota pickup project. The air cleaner is sporting the rear sprocket from a friend’s Suzuki Hayabusa drag bike and along the kick-up from the rear seat footwell over the axle, Hayabusa drive chain was used to add some visual improvement to the otherwise chopped metal. In the door bars you see engine parts: two Hayabusa connecting rods mated to each other with a small-block Ford connecting rod in the center. Those front seats are straight off of Craigslist, while the third seat (“the ‘ain’t no f***ing way I’m riding in that” seat'”, as Aaron noted) is composed of the seat from a Craftsman riding tractor combined with the padded sissy bar from a cruiser motorcycle, welded together on it’s own frame. The turn signal stalk and the handle for the drift brake setup came from a friend who was clearing out a Mellow Mushroom restaurant and are for beers local to the northwest Kentucky area. That killer center-dump exhaust setup is a combination of factory Mustang pipe, a section of pipe from a Dodge Ram pickup truck, and the exhaust tips from a Subaru WRX STi. And that’s just a short list of parts that includes chainsaw bars, strut mounts from a Ford F-150, rebar, and more. There’s even a little piston and rod set from a leaf-blower hanging from the rear-view mirror! In fact, outside of the very basic cage that the Mustang showed up with, most of this work was done in-house, including the custom wiring harness that Shane put together. 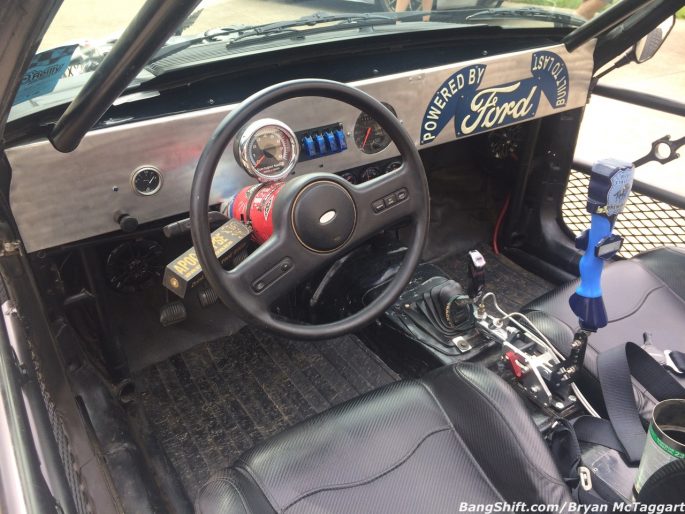 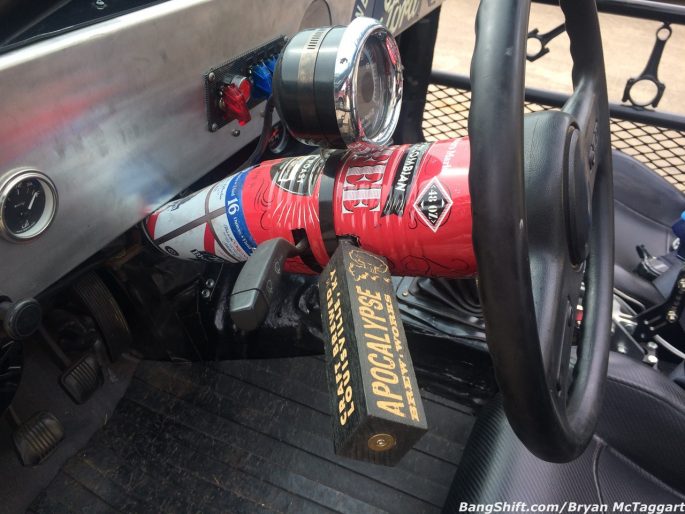 So what’s it like to own and drive a car like this? The FoxKart was finished up so that Shane could drive it to high school, which he did on his last day. You can imagine the amount of phone calls that Aaron must’ve gotten over that stunt. When they took it to the 2018 NSRA Street Rod Nationals to show it off, they got tons of the upturned-nose attitude…except from one little kid, who freaked out over the “race car” in unadulterated joy. I don’t know what’s more endearing to me: the fact that this car should be dead but is now more alive than ever, or the fact that it combines the fine art of irritating the purists while simultaneously encouraging the inner hoon. I won’t lie…at one point while shooting photos I thought I heard Aaron give me permission to move the FoxKart around and I damn near invoked “it’s better to beg forgiveness than to ask permission”. When Shane hopped in instead, he went straight for the gold and gave the neighborhood something to reflect upon…or maybe just the neighbor with the new Porsche in their driveway, who knows. This kind of machine doesn’t just encourage a bit of hooning, it’s the devil on your shoulder, tapping the pitchfork into that tender spot at the nape of your neck over and over again, pushing you again and again. “No one will ever know. Can you imagine how good this will be? Just a little bit of throttle. Give that shifter a good rip. You’ve earned it.”

That’s just my own devil. The Bicketts have their own too, and it’s been busy…in the corner of the shop sit a couple of turbochargers of good size. The engine in the FoxKart is showing it’s age with a puff of oil out of the pipes here and there. It might be time to go ahead and up the ante just a bit. And we bet the neighborhood is just gonna love it when the extra power has the FoxKart showing it’s red, white and blue-painted rear axle wherever it goes. 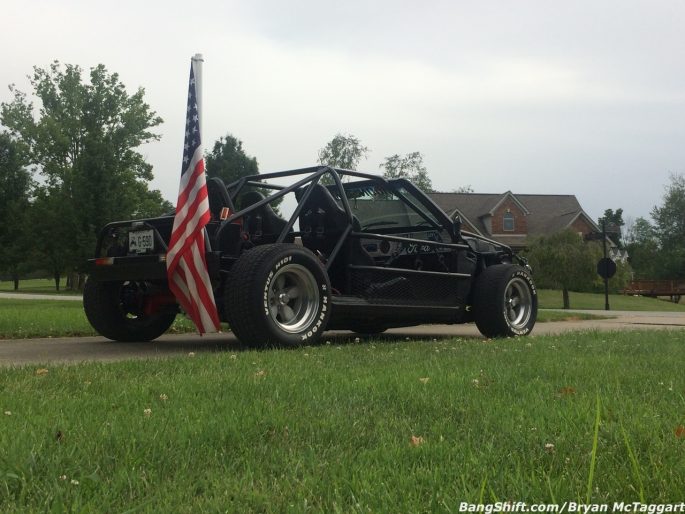 Video: This Feature On The Summers Brothers Goldenrod Is Mandatory Must Watch Stuff Best of 2019: This 1972 Ford Truck Commercial Is Crazier Than You Think It Was To Make