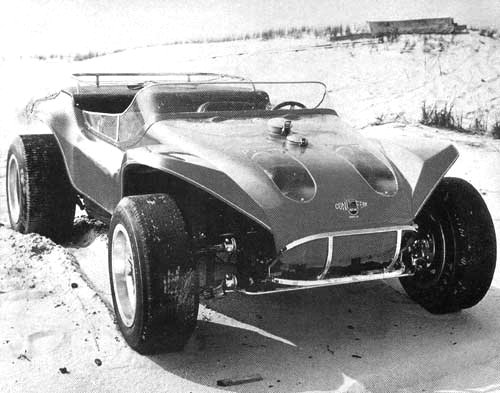 We’ve mentioned The Thomas Crown Affair in a few other posts here. Let’s just say this: There is no other movie that ever made me want a dune buggy more. McQueen’s dune buggy was no ordinary kit, though. It was a highly modified version of a Meyers Manx, fitted with Corvair power. It’s a really wild vehicle that has roots in all kinds of hot rod and kustom kulture history.

First of all, credit where it’s due: You can read a LOT more about this movie car at HunterDunebuggy.com. The Hunter Dune Buggy was a clone of the Thomas Crown Affair Manx, produced by Universal Fiberglass in Scarborough, Ontario. This fan site has reams of data on the original car, and we’re just sampling some of it here.

In 1967, Steve McQueen wasn’t as synonymous with cars and motorcycles as we remember now. Aside from his motorcycle scenes in The Great Escape, there wasn’t anything that really connected him to car and motorcycle culture in any of his dozens of movie appearances. 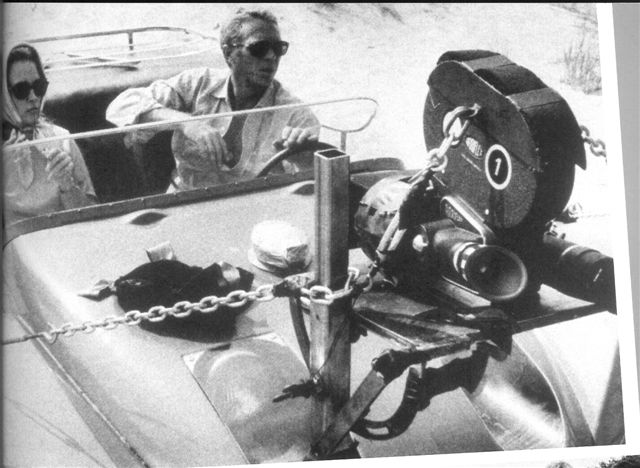 That all changed in 1967, though. Beginning with The Thomas Crown Affair, he wouldn’t star in a movie until 1973’s Papillon that didn’t have cars as some part of the story. But Norman Jewison’s 1968 film put McQueen in one cool car after another. 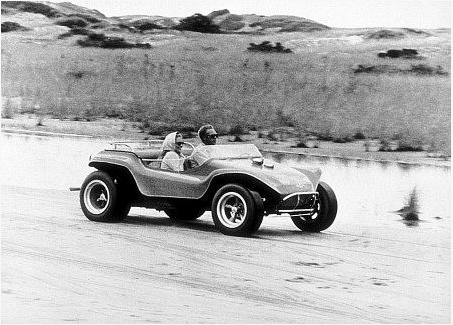 The original script for The Thomas Crown Affair called for the star to run Faye Dunaway around Crane Beach in Ipswich, Massachusetts in a Jeep. Probably a fair choice to not get stuck in the sand, but can you imagine how dull that scene would’ve been without the spinouts, jumps and raw, unmuffled exhaust note of the dune buggy?

McQueen wanted more, and what’s more than that, he’d do the driving. He contracted with Con-Ferr Manufacturing in Burbank, California. For years, Con-Ferr built all kinds of accessories for the growing four-wheel drive market, fitting racks and brush guards on Jeeps, IH Scouts, Broncos and even early Suzuki Samurais. 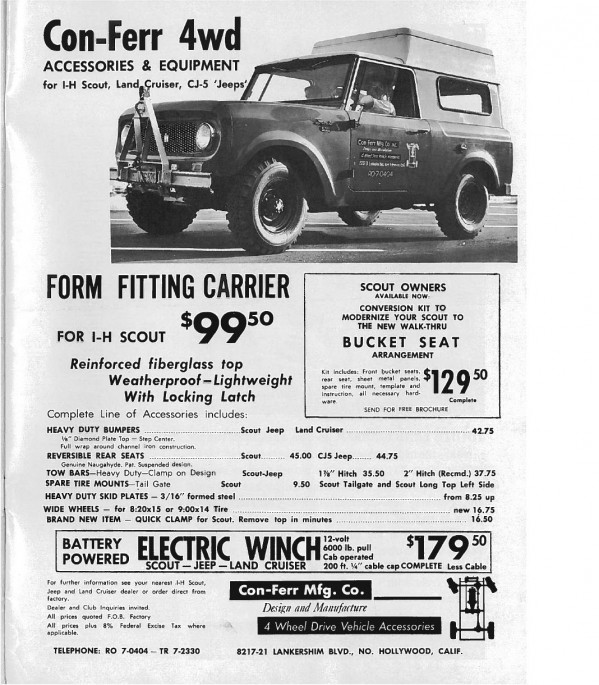 They also built a handful of their own off-road vehicles, so McQueen contracted them to produce the “Queen Manx,” which the company completed in just eight weeks. It started life as a standard Manx, but it included:

A 4-barrel 140 HP Corvair engine. McQueen wanted a Porsche engine, but ran out of budget. He claims it had 240hp in the behind-the-scenes video below
Con-Ferr used an engine adaptor made by Ted Trevor — the guy who developed the Corv-8 conversion for Crown Manufacturing — to mate the swing-axle VW transaxle with its flipped ring & pinion to the Corvair engine
Special extra-wide rear wheels cast by American Racing that were produced to accommodate the Firestone racing tires from Andy Granatelli’s STP Special (#40) turbine car (which almost won the 1967 Indy 500)
Unique headlamp scoops to accommodated the smaller 5¾” DOT approved 12-volt headlamps
A marine-style, super-short windshield and rails
Custom waffle stitched Naugahyde seats and interior trim, crafted at Tony Nancy’s Sherman Oaks, California upholstery shop, using Datsun Fairlady seat frames
Elongated side panels to eliminate the need for side pods; According to HunterDunebuggy.com, Bruce Meyers never incorporated this feature, because it prevented the fiberglass bodies from being stackable
A Con-Ferr nameplate on the hood replacing the Meyers Manx badge 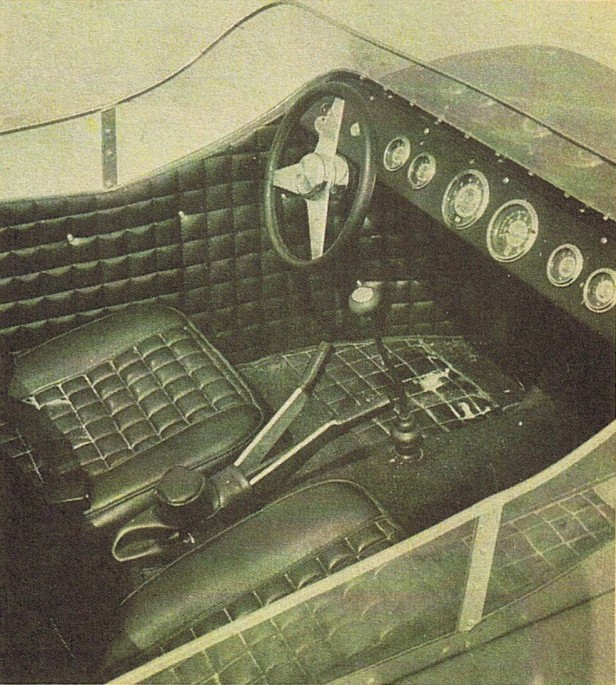 McQueen talked a bit about the buggy in this behind-the-scenes video clip:

After the movie, Bruce Meyers started building Corvair-specific Manx Buggies in conjunction with Con-Ferr called the “Manx-Vair.” If you find a Meyers Manx with a serial number beginning in “CC,” it was Corvair-powered. “CV” serial numbers refer to buggies powered by Volkswagen engines. 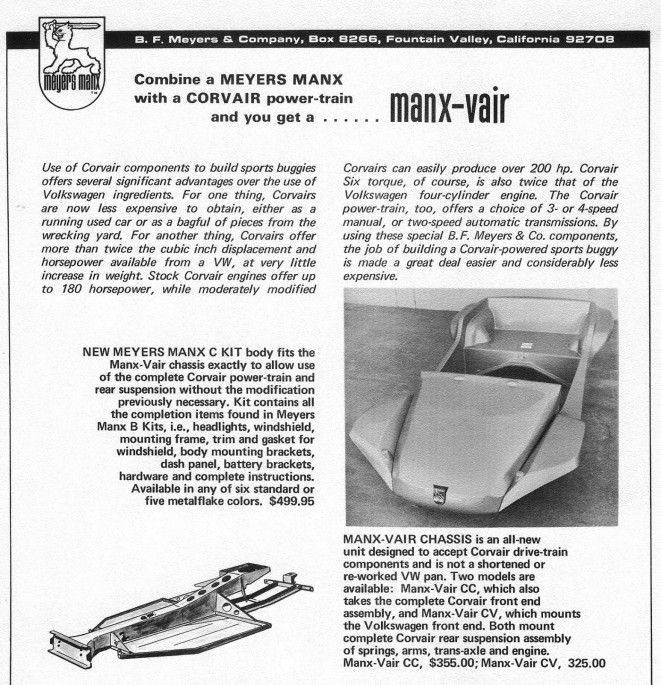 Con-Ferr also produced Corvair powered replicas of the Queen Manx, with marketing materials that referred to the movie. Consider, for a moment, what it would cost a company today to market a product using the name of a film with an Oscar under its belt, even if that Academy Award was for “Best Song.” Con-Ferr’s kits paired a modified  Meyers Manx body with a custom-fabricated chassis, rather than using VW floorpans.

1971 Hemi 'Cuda convertible Sells For $3.5 Million - In Eight Minutes At Mecum Seattle - When/Where Does It Stop? Edelbrock Seeking Test Vehicles For E-Force Blowers - You Get To Keep The Blower! See What They Need Here