It’s Not A Chevelle With A Blown Radiator, It’s The SE-124 – A Steam-Powered Chevrolet! 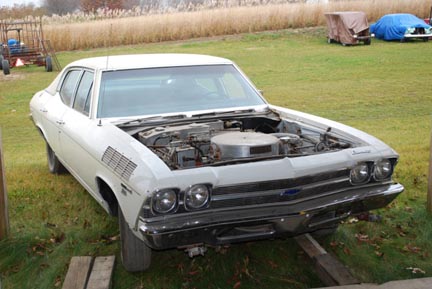 The Chevrolet Chevelle can be found with many different engines. From the factory straight sixes and low-end small-blocks to big blocks, from nitrous-snorting high-RPM screamers to mountain motors, and even diesel swaps, it seems that the A-body could take pretty much anything thrown at it. But did you know that the factory commissioned a steam-powered 1969 sedan as a testbed for the viability for a steam-powered automobile? Yeah…we couldn’t have dreamed that one up, either.

Fairly little information exists on the Chevelle, which was coded SE-124, or it’s sister concept, the 1969 Pontiac Grand Prix dubbed SE-101. GM developed the Pontiac’s steam engine, while the Chevelle’s engine was farmed out to Besler. The majority of the Bessler design was lifted from the 1920 Doble steam car patents, which Besler owned at the time, combined with one-half of the Chevrolet 307ci V8. At it’s best, the engine pumped out a severely anemic 50 hp. Other than the obvious modifications for the steam engine, from the firewall back you had a basic 1969 Chevelle sedan, with a three-speed manual transmission and standard rear axle. While it certainly wasn’t fast, it was functional, racking up 5,000 miles before Besler gifted it to Harrah’s Museum, where the car resided until Tom Kimmel, the current owner, acquired it. In it’s current state the Chevelle is rough, but complete, and the intention is to refinish the engine and to improve the performance of the car. We sincerely hope he’s joking about putting 22s on it, though.

This 1967 Pontiac Catalina Wagon Has A 400ci Engine, Air Bags, A Virtually Nothing We Would Change It's A Rat Rod...It's A Mini...It's A Tire-Spinning Top And It's Awesome!

5 thoughts on “It’s Not A Chevelle With A Blown Radiator, It’s The SE-124 – A Steam-Powered Chevrolet!”