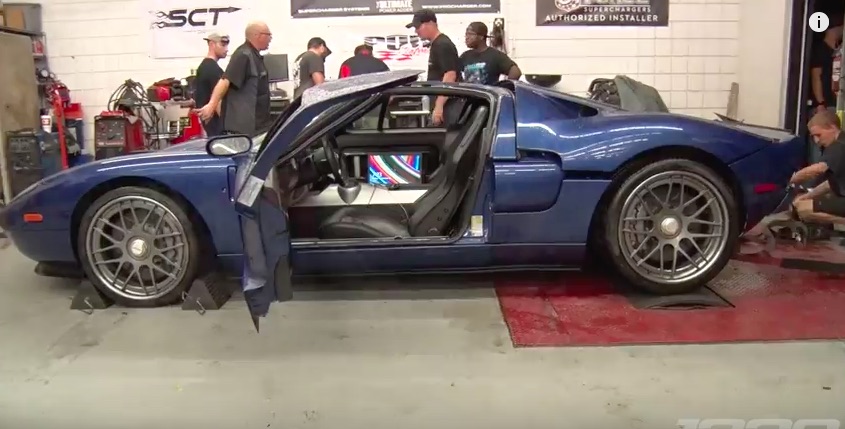 With all of the hubbub surrounding the 2017 Ford GT it is easy to forget that there was another modern version of this car that made huge waves when it was introduced about a decade ago. The first “new” Ford GT used a modular engine that was supercharged, mounted behind the drivers, and had tons of the original’s car flavor in its design and feel. One of the guys who fell in love with these cars and got hold of one is Minnesota’s Dan Schoneck. Schoneck is in the carbon fiber business and you will see some of his handiwork on this car. He made the killer air intake and some of the other parts under the rear engine cover.

The real point of this video is not carbon fiber, though. It is to highlight the fact that Schoneck ripped the factory blower of this car and replaced it with a ProCharger centrifugal supercharger. The thing makes nearly 900hp to the tires and as you will see, when it is running right, it can hammer the scoreboards with some stout numbers. Schoneck is not gentle with this car and he often talks about pounding the thing’s daylights out on social media. Frankly we’d do the same thing with this amount of power and coolness under our foot!

The video was made at the Saint Louis Street Car Takeover and you’ll see it hit the dyno rollers and then do some roll racing at the track. The interview with Schoneck is cool because he does a nice job talking about the car and how he treats it. The thing sounds flat nasty when he laces the pedal in the low gear he’s holding as it crosses the starting line.

ProCharged Ford GT? There may be only one now but after this gets out we’re thinking that they’ll multiply.

This Video Profiling The Construction Of Aerospace Components Water Pumps Is Cool The Brutally Awesome Drag Week Camaro Of Mike Wenzler Is For Sale - Nitrous Hammer!